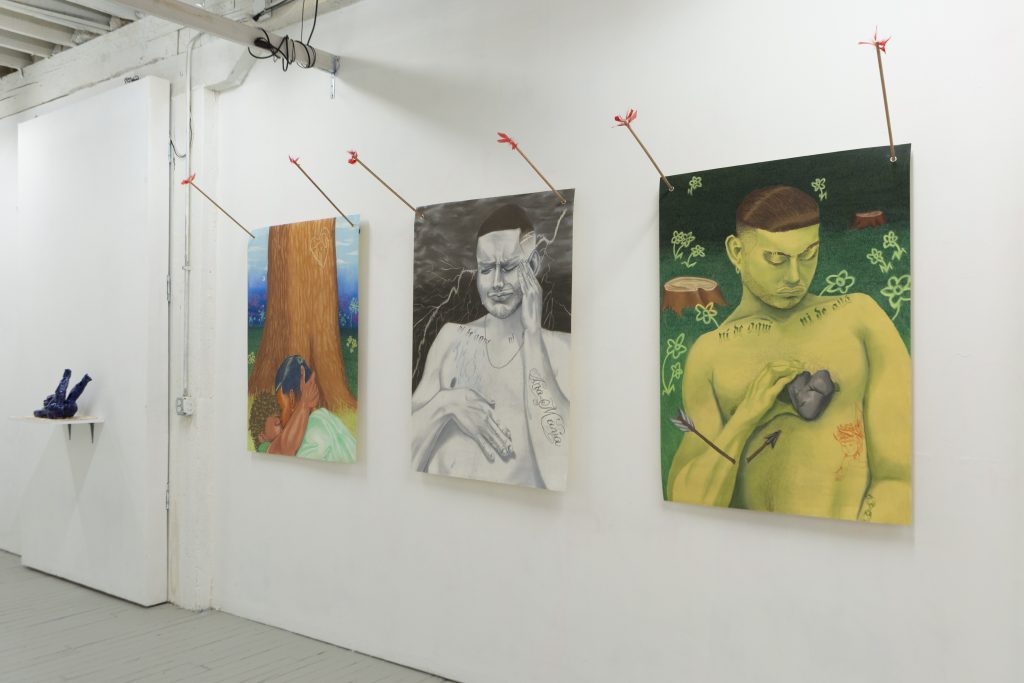 “Queer theory has had something to say about sex, but until recently it has had almost nothing to say about love,” David Halperin wrote in 2019. Artist Juan Arango Palacios finds that queer love has been neglected as part of a larger over-sexualization of queer people in the public eye. Currently, legislation such as the “Don’t Say Gay” bill, prohibition of audience members of all ages from attending drag shows and book bans are being filed across the country, all based on the false premise that the existence of LGBTQ+ people is somehow inherently sexual. In a solo exhibition, “Amor de mis Amores: at Jude Gallery, Palacios emphasizes queer collectivity, intimacy and love beyond this frequent hypersexualization.

Opening night of “Amor de mis Amores” differs from an ordinary exhibition opening. The lights are dim, the air is humid from the crowd of bodies in the hallway outside the gallery, and people are dancing to the rhythm of Cumbia music, which originates from Palacios’ home country, Colombia. The lyrics from songs like “Quiziera Tener un Corazon de Piedra” [I Wish I Had a Heart Made of Stone] and “Amor se Escribe con Llanto” [Love is Written with Tears] echo both audibly and visually over the walls as they serve as a major inspiration for “Amor de mis Amores.” The opening night is a party; a celebration of queer passion, vulnerability and survival.

The exhibition is spread across three rooms: some artworks are framed, others hang from large wooden arrows that reference queer icons such as Cupid or Saint Sebastian. The arrows pin into place vibrantly colored pastel portraits of individuals, demons, angels and lovers resulting in a dichotomy of pain and pleasure. Whether it’s a stone heart being pulled from a chest, lovers in each others’ arms catching fire or sad tears falling to spell out the word “Amor,” each piece includes surreal, dramatic and fantastical elements accompanied by small ceramic ornaments derived from Palacios’ life experiences as a queer Latinx person. 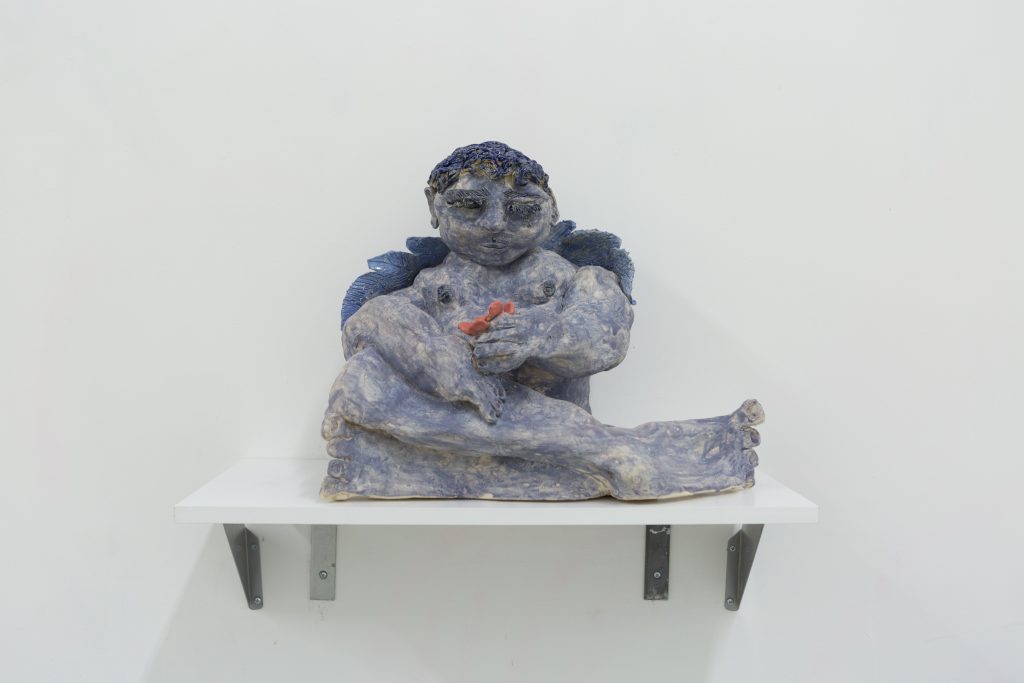 “Amor de mis Amores” also includes two ceramic docile angel figures in blue hues; one, titled “Angel Dormido,” whose head rests on his arms as he sleeps, and “Angel Azul,” who sits cross-legged and gazes down at a little pink flower cupped in his hands. These works speak to the tender and vulnerable state of queer love.

As the United States continues to be a hostile environment for queer people by proposing and adopting anti-LGBTQIA+ legislation, it’s easy to feel furious that queer voices are still not being heard or represented. In his experimental documentary Tongues Untied (1989), the filmmaker and gay rights activist Marlon Riggs expresses anguish about the silencing of voices of queer people of color from LGBTQIA+ communities while their bodies are continuously hypersexualized for white viewing pleasure. In a monologue, Riggs says “it is easier to be furious than to be yearning.” Instead of fury, Palacios chooses to represent queer love beyond its hypersexualization and white idealized heteronormative vision by embracing yearning, vulnerability, tenderness, loss and desire. (Livy Onalee Snyder)