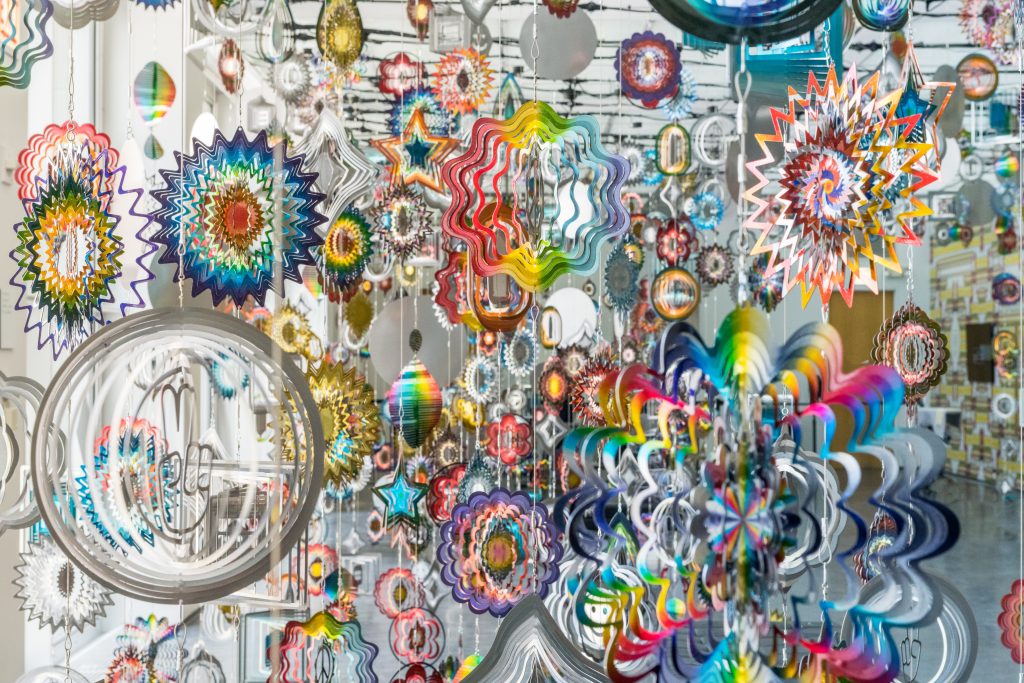 Upon entry to the fourth floor of The Museum of Contemporary Art Chicago’s “Forothermore,” Nick Cave’s “Spinner Forest” (2022) greets the viewer with thousands of reflective, metallic and glistening spinners. “Wind spinners” that hang over porches and yards throughout the Midwest have been augmented to include shapes of Cave’s design. Spinning in concentric circles, repeating polygons rotate in the sunlight; upon closer look, they contain symbols—pictograms—including guns, smiley faces, hands folded into peace signs, daisies and psychedelic ephemera.

“Spinner Forest” is a rendition of an installation of Cave’s that was first compiled for “Nick Cave: Until,” which appeared at Carriageworks in Sydney, Australia. at MASS MoCA in 2018 and at The Momentary (2020-21), a contemporary art space in Bentonville, Arkansas. In “Spinner Forest,” Cave successfully renders a fantastical space that is playful and visually intriguing, and without hesitation dives into questions such as, “Is there racism in heaven?” This question was one that Cave asked himself throughout the process of making “Spinner Forest.” It is a turn on the phrase, “Innocent until proven guilty,” or, in this case, “guilty until proven innocent.” The phrase probes the complex issues of race, gun violence, racial profiling and gender politics that divide the United States, and the extension of these complex subjects in communities around the world. “Spinner Forest” conditions the viewer to be receptive to the construction of dialogue about violence and systemic injustice side-by-side with imaginative and utopian methodologies for the creation of solutions.

“Forothermore” is Cave’s first retrospective. The Chicago artist, known for both his community-oriented projects and his visionary, multidisciplinary work, has appropriated the kitschy plastic and reflective spinners found outside the homes of many working-class people in an effort to ask serious questions about gun violence and racial profiling while insuring a grand sense of play, delight and approachability.

Proceeding into the first gallery, the viewer is greeted by a dazzling display of Cave’s “Soundsuits” and “Beaded Cliff Wall” (2016), a massive wall covering made of millions of pony beads threaded onto shoelaces, then tied together in a grid formation by hand. However, the “Soundsuits” are most notably Nick Cave-ian. They stand virile and vital. At a minimum of eight-and-a-half feet tall, they are a myriad of towering figures seemingly made of plastic flowers, thousands and thousands of beads and buttons, yard statues and sock monkeys and other items. Cave’s “Soundsuits” appeared magnetic the first time I stumbled across them in “Nick Cave: Meet Me at the Center of the Earth” at the Cincinnati Art Museum in 2012. The Soundsuits seemed to represent working-class glitz and glamour. The dime-store materials, juxtaposed with handmade crocheted patterns, when combined on this nine-foot-tall armature, felt combative yet loving and approachable. They were the suits for a utopian army somewhere in the future that militarized compassion, praise and collaboration, where weaponized dance resolved people of their ill will and reactionary maneuvers. The “Soundsuits” are icons with which to project our fantasies of better worlds. They are so utterly imaginative, that restraining my desire to imagine the absolute best-case scenario is both unnecessary and unmotivating. In the presence of “Soundsuits,” I am willing to imagine total safety and freedom. 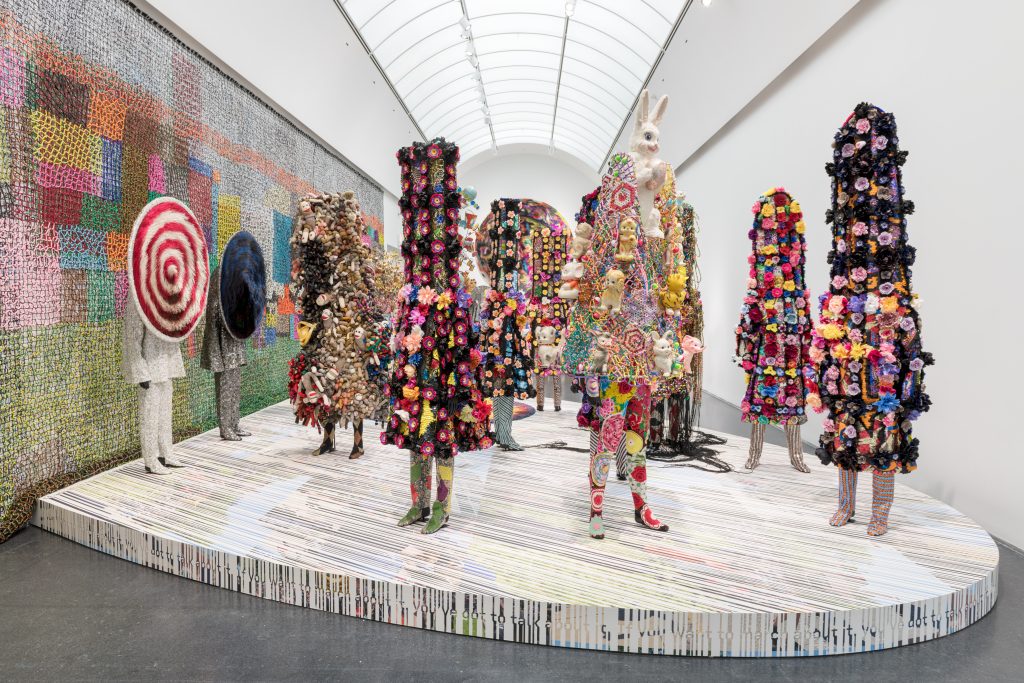 Upon the raised platform with the first “Soundsuits” is a large printed graphic running both along the base of the wall and along the side edge of the platform, reading: “if you wanna march about it you’ve gotta talk about it.” The text begins in clearly formed letters that are dragged across the platform, creating a type of barcode across the stage on which a collection of “Soundsuits” is situated. The text feels like a misstep, for it implies that LGBTQIA+ and Black activist communities haven’t been discussing state-sanctioned violence in open forums for over a century in the Americas. Nevertheless, I prefer to believe that this phrase gestures toward institutionalized politeness that so often overpowers art that critiques systemic structures such as societal bias and carceral systems. Perhaps “if you wanna march about it you’ve gotta talk about it” is Cave’s reminder to the museum, and the visitor, to actively protest injustice and participate in the labor that is needed to correct it.

Nevertheless, the “Soundsuits” demonstrate pride and power and joy and hold a palpable contempt for their need to exist in the first place. They are made to disguise the body wearing it. Cave has said that the suit becomes a shield for the wearer, a form of razzle-dazzle camouflage—a protective barrier shielding bodies that consistently feel othered from the gaze of those who persecute.

“Nick Cave: Forothermore” is both an ode to those who, whether due to racism, homophobia, or other forms of bigotry, live their lives as the “other”—and a celebration of the way art, music, fashion and performance can help us envision a more just future. 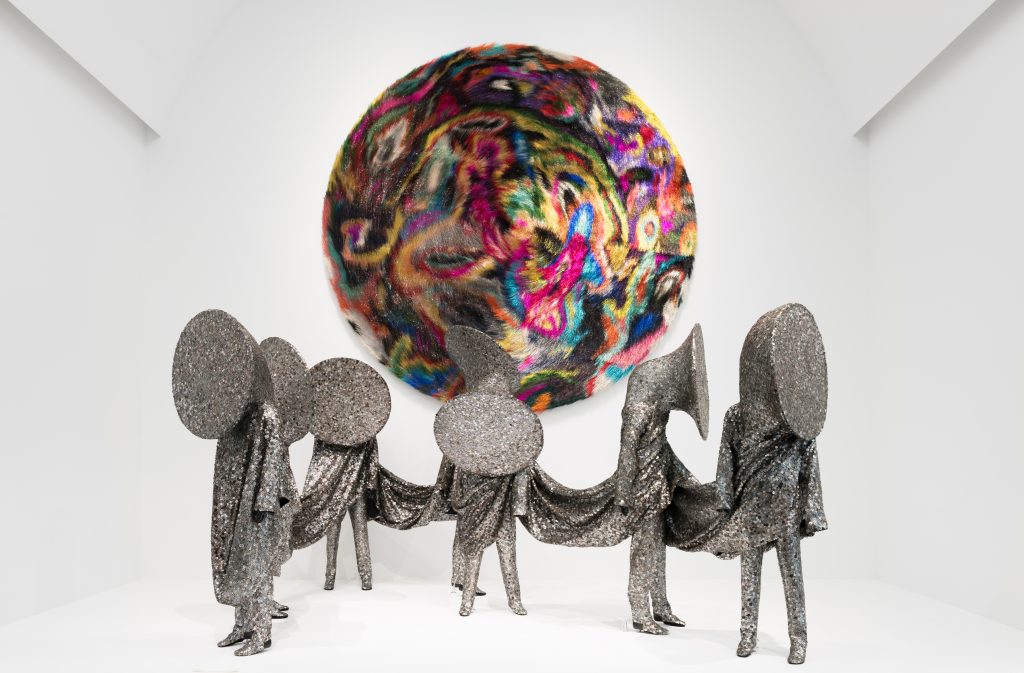 Naomi Beckwith, the exhibition’s curator and former MCA senior curator who recently moved to the Guggenheim, did a magnificent job of welcoming the viewer into Cave’s joy in collaborating and organizing, while pulling them into the depths of his navigation of reclaimed materials, finding hope in discarded materials, and the potential of reimagining with that which we already possess. In this process, the viewer witnesses a tremendous amount of personal and historical grief, loss and a memorial. Upon exiting the first room of the installation, a wall text reads:

What is truly valuable in a culture of excess? Our society produces an abundance of objects: sometimes rare and handmade, but often cheap and easily replaceable. In wealthy societies, most consumer goods ultimately end up in the trash heap of history.

Cave plays with the way we value some items over others, collecting discarded and ‘useless’ objects—plastic trinkets, flea-market finds, kitschy decorations—and, with the skill of a couturier, giving them a second life as dazzling art objects. Creative reuse is a way for Cave to make not only a visual statement but also an ethical one: if we can transform junk into art, the world is abundant with potential value.

Though the statement willfully engages in classist perspectives by implying there are universally true understandings of what objects have value and to whom, the statement still manages to pose an important question that Cave consistently employs. Cave uses his myriad of flea-market finds as a metaphor for asking the audience who they value and why—by forcing them to ask themselves what objects they value and why. The statement integrates consumerism into the questions about race, queerness and class that are core to Cave’s work. Questions such as how can circumventing consumerist tendencies revitalize what we prioritize or value as a society? How do our things define us? How do they unite us? And how will they isolate or unite communities that are trying to grow, develop and take care of one another—in the way that Cave is interested in? 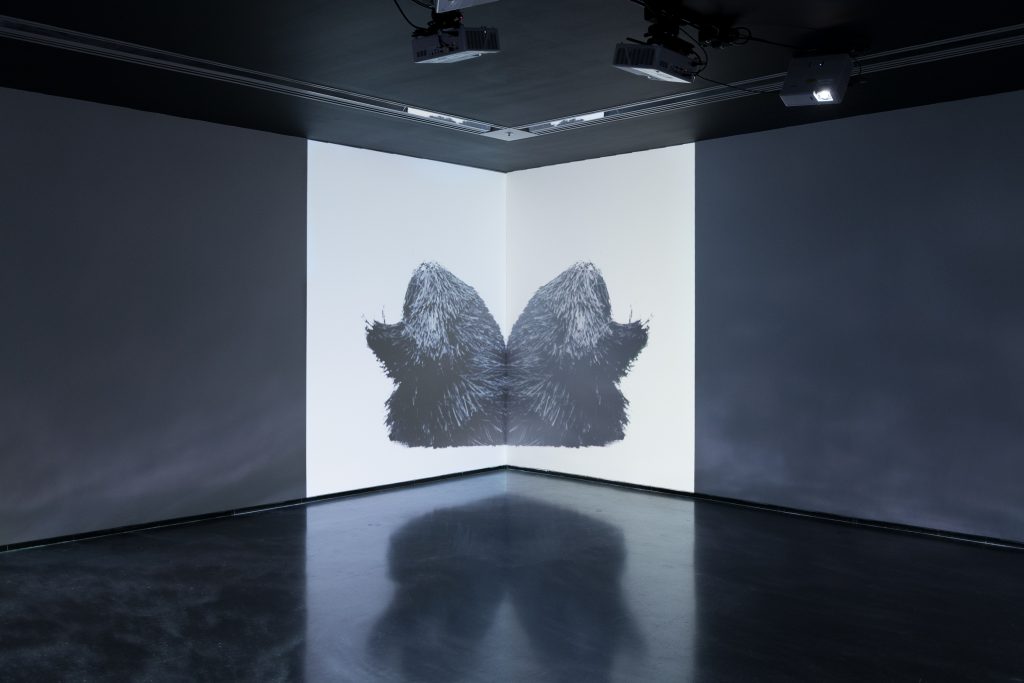 Then we come to “Speak Louder” (2011). The work is composed of seven “Soundsuits” committed to one another with an extension of fabric that unifies them into a singular body. Rather than tower over the viewer, their tops consist of round flat plateresque shapes, that later, upon seeing the use of the gramophones in “Platform” (2018), read as loudspeakers—reverberating the need to scream to be heard. “Speak Louder,” made of black mother-of-pearl buttons with other upholstery and armature details, projects an assemblage of unity and volume—both with regard to weight and sound metrics. 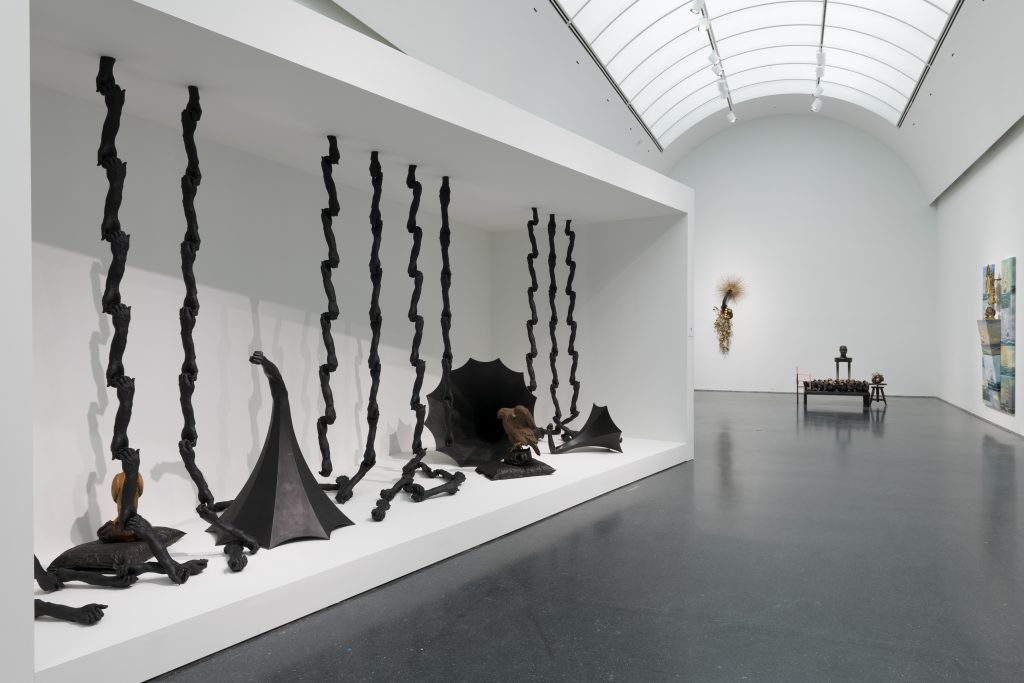 As the first half of the exhibition served as a shuttle into an imaginative future, the second half pulls us into the patterned and diverse experiences of personal and social grief that are held by Cave. It serves as an evocative reminder of where all that hope comes from.

“Platform” is a fairly condensed installation compared to previous iterations; when it was displayed during “As It Was and Still Is” at Jack Shainman Gallery in New York City, the installation took up most of a large gallery. Here it is condensed into a dire diorama; we see four large gramophones, chains of bronze (and blackened) hands, Black heads, pillows and wood-carved eagles. The installation evokes Jim Crow tropes by placing Americana objects, the wood-carved bald eagles, in proximity to anguished Black faces. Black hands are suspended, forming a chain of hand-holding that allows them to hang off of one another—creating a chain link of interwoven hands. It evokes the horror of American romanticism and how it has consistently proved violent to Black bodies, and the enduring strength of community and support structures that have been built in spite of that violence. It is brutish and it is tender. 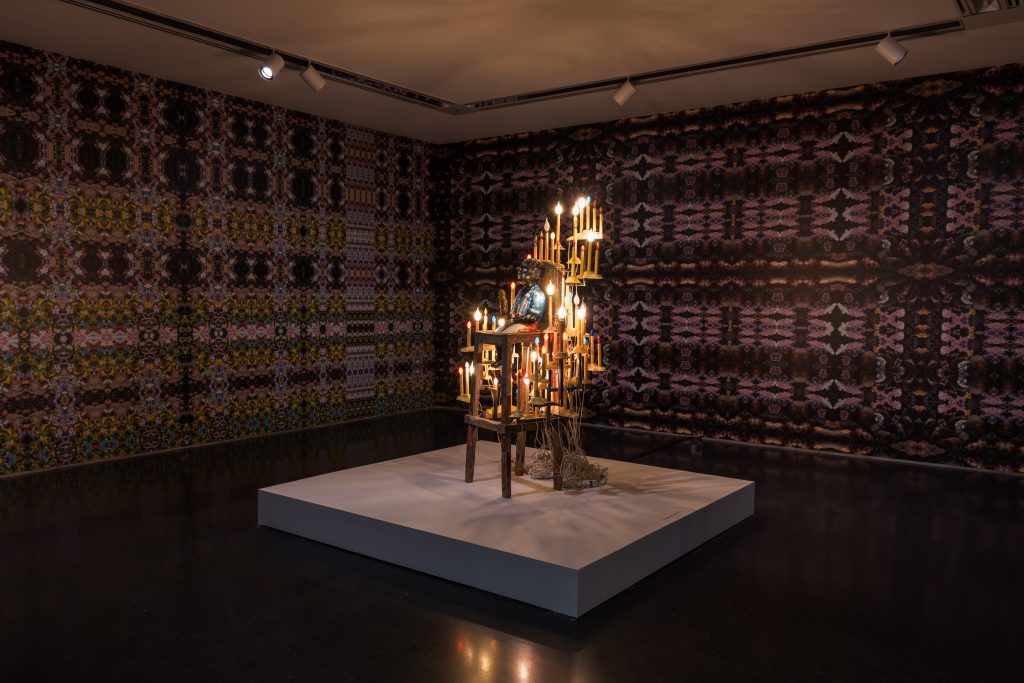 “Truss” (1999), one of the oldest pieces in the retrospective, serves as a memorial in every sense of the word. As with many of Cave’s early works,“Truss” commemorates a personal loss; it is a memorialization of a friend of Cave’s who died as a result of an AIDS-related illness. Many, many used, distressed, ruined and discarded work gloves are encased in golden-amber resin and installed within a metal armature. This is a memorial, but it also feels like a promise toward an unknown, better end. The inclusion of this work, sectioned off on its own, feels intimate and meandering. It’s private, dark. Yet it reminds us why joy, earnest love, tried and true collaboration and working-together-ness is so very important. Those we have lost deserved better in the first place.

“Nick Cave: Forothermore” is on view at the MCA, 220 East Chicago, through October 2.