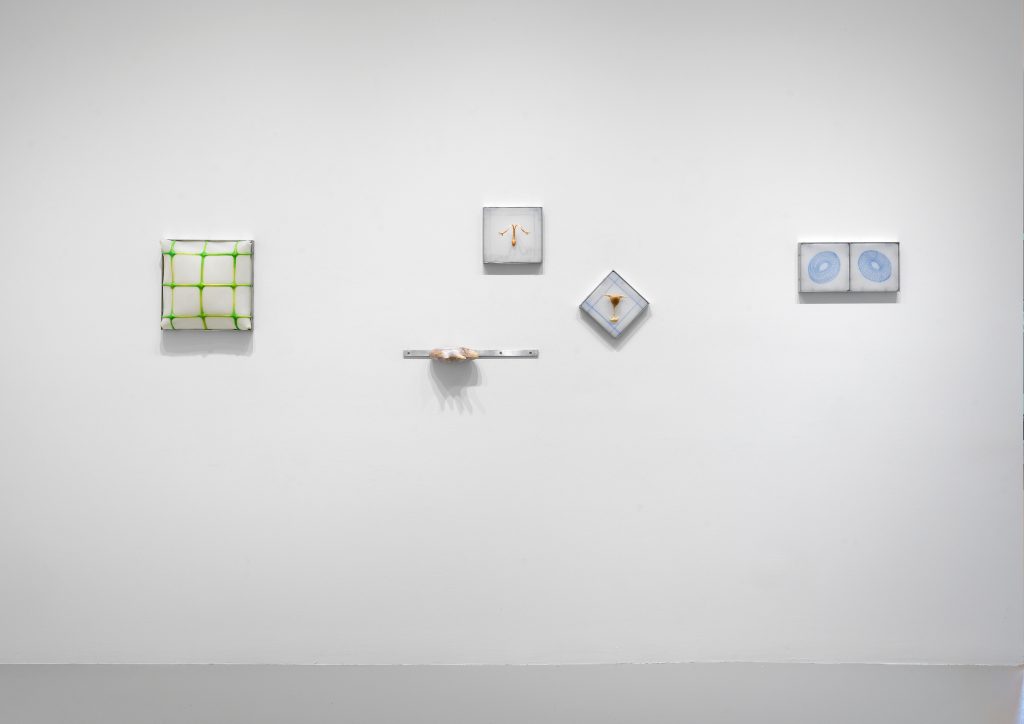 “Gentle Content,” a group exhibition at Rhona Hoffman, has a visible challenge: how to show four artists with very different practices whose new works also happen to be almost entirely wall-based. Instead of interlacing works by different artists to knit a unifying curatorial vision, which is what curators of small group shows sometimes do for a gallery setting, curator Julia Birka-White has chosen to assign a wall to each artist, allowing space for each to vignette their own distinct style and narrative. This strategy works for this exhibition in interesting ways. Four artists form two pair of cogent dialogues: one between Danny Bredar and Alberto Ortega Trejo; another between Martha Poggioli and Davina Semo. What conditions these works to stick together is a latent, explosive energy that flows under the disguise of tender appearances.

Danny Bredar’s work is sometimes cocooned with riddles and symbolism to an extent that discourages the viewer from chasing after signifiers; the artist’s intention lies elsewhere—through the process of obsessive and repetitive mediation to insert his own commentary. Two identical cops on a modestly sized painting, “Two Cops in the Sun,” look like the “Matrix” virus that multiplies. Religious symbols recur as ironies. Apart from a stripped-down portrait of Patriarch Kirill I in “Kirill I,” the Russian Orthodox leader who has justified the invasion of Ukraine, a red cross visible in the top right corner of “Leaving the School”—the title of which immediately takes me to the deadly Uvalde school shooting—stands through a chaos of abstract brushworks that charge against the canvas like gunshots. 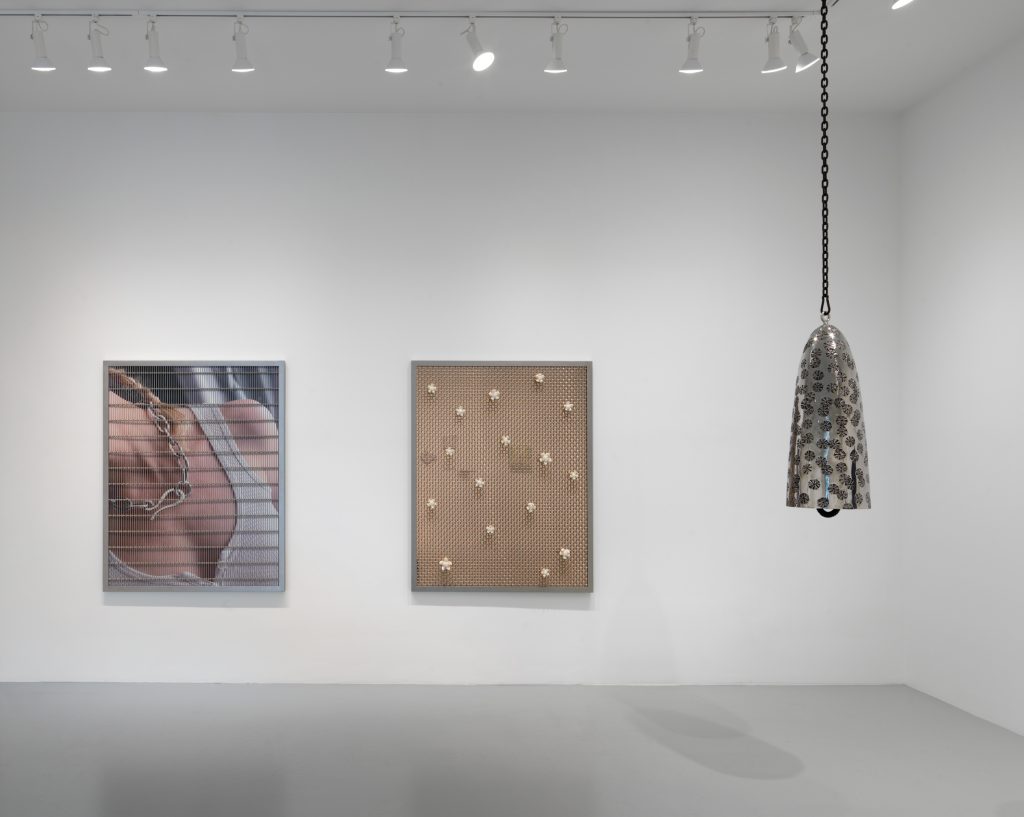 Across from Bredar’s paintings, Alberto Ortega Trejo’s three-piece installation chimes in with similar disquiets and hard-to-solve puzzles. Also trained as an architect and designer, Ortega Trejo is dexterous at distilling compelling images from dense research. Small Kara Walker-style cut-outs, made of metal, float just a tiny bit from the wall through the support of thin metal beams that have their middle portions painted red, like a red thin line that threads together shapes that have the tendency to metamorphose between figurative and abstract. Rather than disclosing what they are, strangely, they serve more like responses to what the viewer thinks they are. A nozzle that stems out of a sack with roots, a chimney on top of a leaking water tank, a prosthetic leg screwed to a scythe snath with a vulture on top. “Agua muy vieja del lugar espantoso (Very old water from terrible place)” seems to recount a cautionary tale about the consequences from over-extraction and exploitation of the environment. Next to it, “Cuando no nos dan fiebres, nos dan dolores en los huesos (When they don’t give us fevers, they give us pains in the bones),” composed of six charcoal drawings tiling into a single shape, which looks like a bat or shackle (it’s actually an atlas bone), confronts me like a Rorschach test, psychoanalyzing my inner anxiety about the pandemic that has irreversibly altered our lives.

If Bredar and Ortega Trejo use visual symbols to discreetly insert their social critiques, Martha Poggioli and Davina Semo invest heavily in materials and their metaphors, converging on the ideas of protection and soft resistance. Poggioli shows another iteration of her ongoing research on the history and social implications of the IUD (the intrauterine device that prevents pregnancy) and pessaries (a prosthetic device most commonly used to treat pelvic organ prolapse due to childbirth or used as a means of contraception). Diving deep into the development of the designs (most of her works include a patent number that indicates its source image), the artist uses forms of these devices as representations of the interior architecture of female reproductive organs. Compared to her commanding metal floor-sculptures shown at Julius Caesar in 2021, which had IUD-inspired shapes that looked like armor pieces shed by some extraterrestrial creatures, works displayed at “Gentle Content” exemplify the artist’s renewed interest in soft sculptures. In “The Dancer (US2013/0014762 A1),” a three-dimensional blob with tentacles, tan in color and shaped as though it was casted by a uterus, floats in front of a metal-framed epoxy canvas. Similar strategy of contrasting slick and cold aluminum against supple and organic silicone is reapplied to “Soft Body (Mother Is Us All),” where a rubbery, earthy thing which looks like some specimen that has escaped from a museum of medicine is trapped perpendicularly to a metal bar, dripping somber absurdity. With the uncertainty for American women’s reproductive autonomy looming in the background—or perhaps more so menacingly in my mind, Poggioli’s works reverberate like distant sirens.

On the opposite side, Davina Semo’s work also rings, and quite actually. Having taken over the waterfront at Brooklyn Bridge Park in 2020 with a series of reflective orange bells each suspended from monumental metal beams, the LA-based artist has been casting bells since 2016. Like her previous bell works, “Bloom” also has an elongated dome that resembles a campanula bud waiting to open. Its outer reflective surface is disrupted by clusters of debossed floral patterns, as though the bell had survived rounds of daisy-shaped bullets. Flower power once again seeds in “Foundation,” where 3D-printed resin magnolias erupt from an acrylic mirror blanketed by a layer of woven stainless steel mesh. Reflecting Poggioli’s installation across the gallery (both physically and metaphorically), “Foundation” represents the ambivalent nature of “protection,” an act of defense that, while promising security, almost guarantees the imminent existence of transgressions. (Nicky Ni)