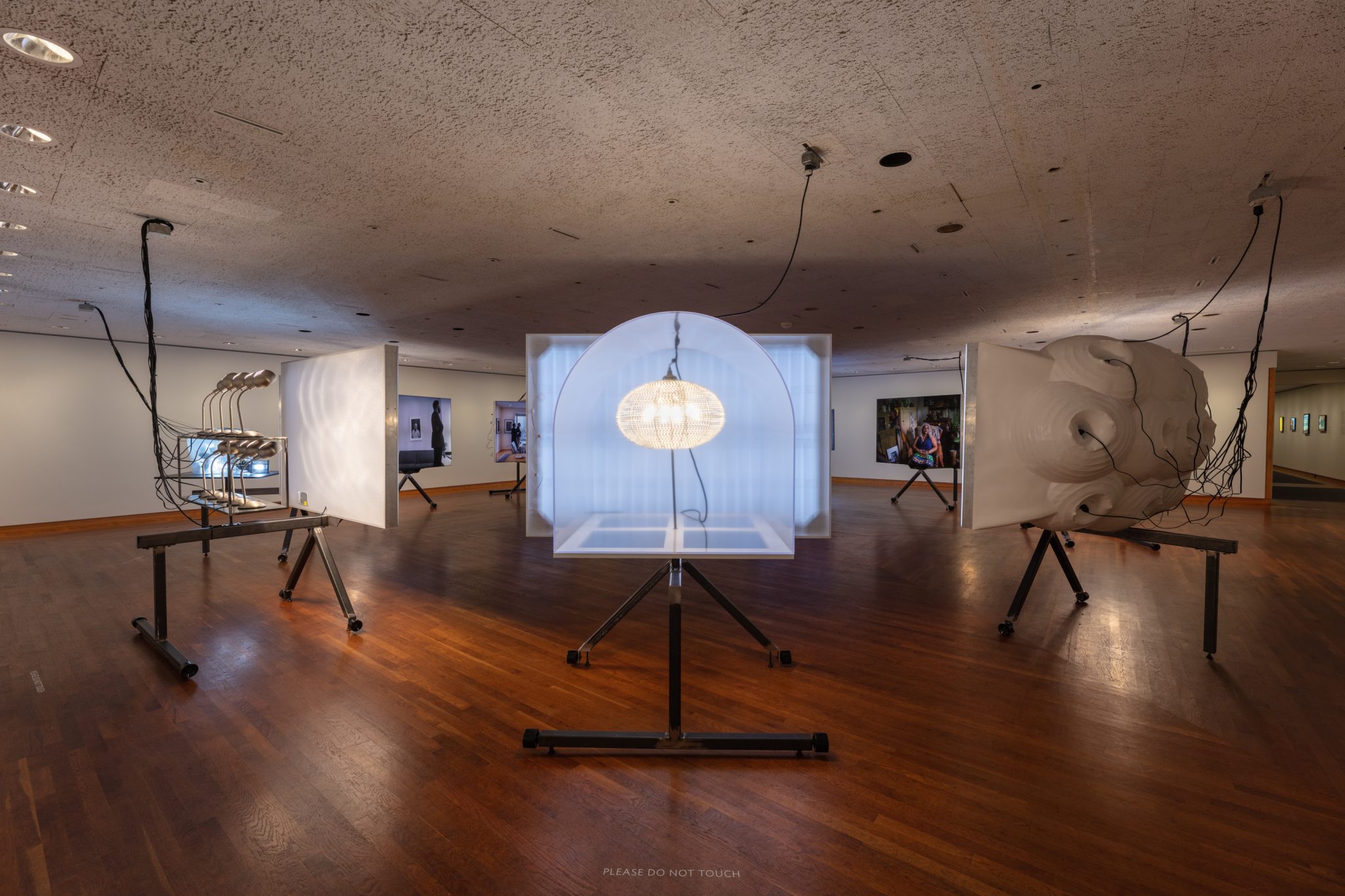 Museums and cultural institutions have been making deeply concerted efforts to engage communities: crafting exhibitions, public programs and community outreach to engage demographics likely to have been excluded from decision-making processes and board rooms that dictate the infrastructure of the institution. As large, complex, hierarchical organizations, museums are also expected to provide learning opportunities, forcing the question of who does or doesn’t have access to materials, archives and visible gestures that authenticate the relevance of museums to their publics. The inextricable link between accessibility and social class turns out to be the fatal flaw in engaging “minorities” through participatory action. As curatorial efforts remain confined to the interests of the institution, an echo chamber of gestures has maintained the status quo of value systems concomitant to ticket sales.

In refusal of the deteriorating political, intellectual and social conscience oft associated with the civilizing mission of “high art,” the many-sided Floating Museum opened “A Lion for Every House” at the Art Institute of Chicago, inspiring a discussion on the porousness of the institution and the archive as active agent in collective memory. By considering the institution as a collaborative partner, Floating Museum tests territorial borders in a process-centered exhibition presented in the Photography and Media galleries. Ten large-scale photographic portraits mounted on lightboxes sit facing one another in a community circle, indicating trust and mutuality, highlighting the lateral nature of the collective’s process. Extending rearward from the lightbox is a series of opulent, mnemonic, bulbous gestures, carved of domestic light fixtures that emanate warm and cool washes through half-covered translucent moving boxes and plastic sheets. An entanglement of domestic and the alien touch down on welded aluminum and steel legs with wheel-like feet. The viewer is drawn into the comfort of ten living rooms from the vibrational center of the circle, where each host is photographed sitting beside a photograph, gifted from the museum’s collection. “We were interested in the museum, its history, and the mindset of generosity that once existed within the institution. Beyond discourse, there are people thinking together, talking together, leaving frameworks open to look-at together, that connect us in more meaningful, tangible and lasting ways,” says Andrew Schachman, one of Floating Museum’s four directors, “I mean, how much does the materialization of discourse matter if we don’t touch the ground?” 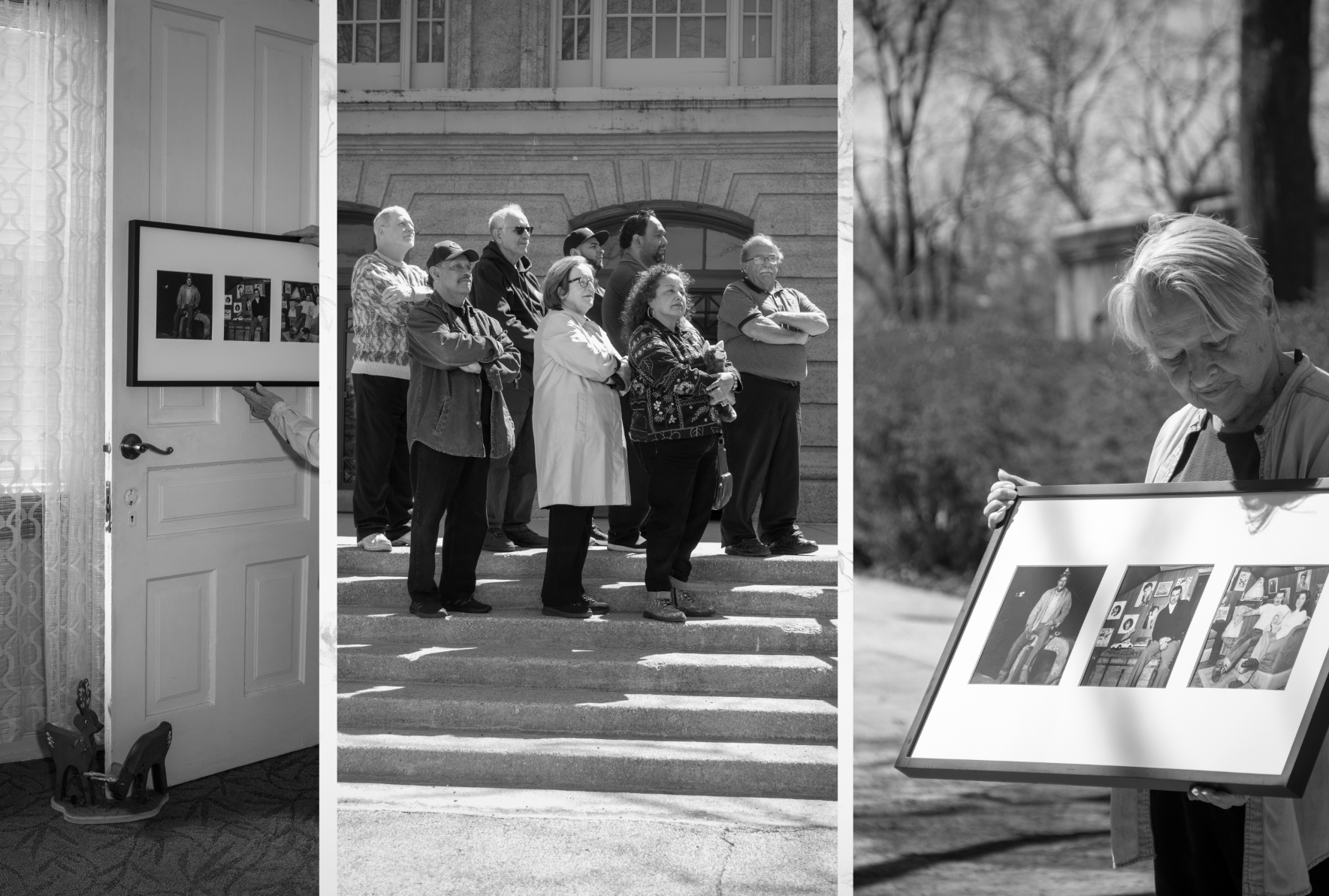 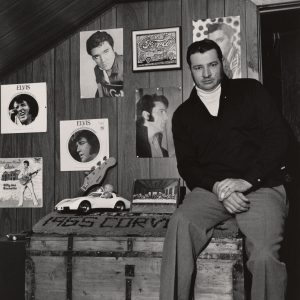 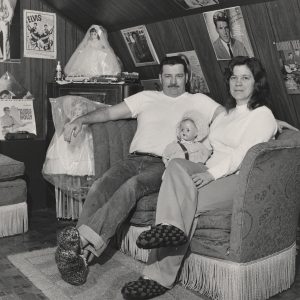 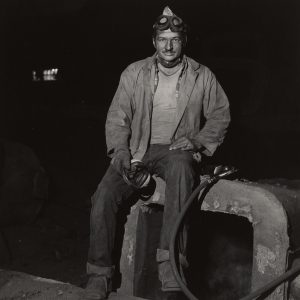 The Floating Museum has invited local artists and institutions to collaborate since its inception in 2014, making it impossible to decipher roles in each project. All four co-directors bring seasoned knowledge from their respective fields: Faheem Majeed, once the executive director of the South Side Community Art Center, is an artist, curator, educator and community facilitator who brings his unique curatorial and administrative skills. Avery young, a prominent poet, writer and activist, who was recently conferred the 2022 MacArthur and Field Foundation New Leader award for engaging and advocating for the lives of those suffering structural inequity and oppression, brings linguistic exploration and the logic of rehearsal. Jeremiah Hulsebos-Spofford, a sculptor and professor at the Indiana University Northwest School of the Arts, has been rethinking public art, integrating critical theory and community-forward problem-solving through sculpture. Schachman, a designer, architect and professor of urban design at the University of Chicago, considers the cross-section of art, architecture and public institutions while maintaining an interest in “self-estranging techniques of looking at structures so we can see them.” “We practice tactical anthropology,” says Schachman, as I ask what drives the collective to mine institutional structures in every project. Tackling material and immaterial elements of “the work” through carefully positioned conversations, research, open public workshops and collective creative gesture, Floating Museum initiates what he describes as a process of détournement—revealing the social, cultural and economic complexity of roles that compose a museum. 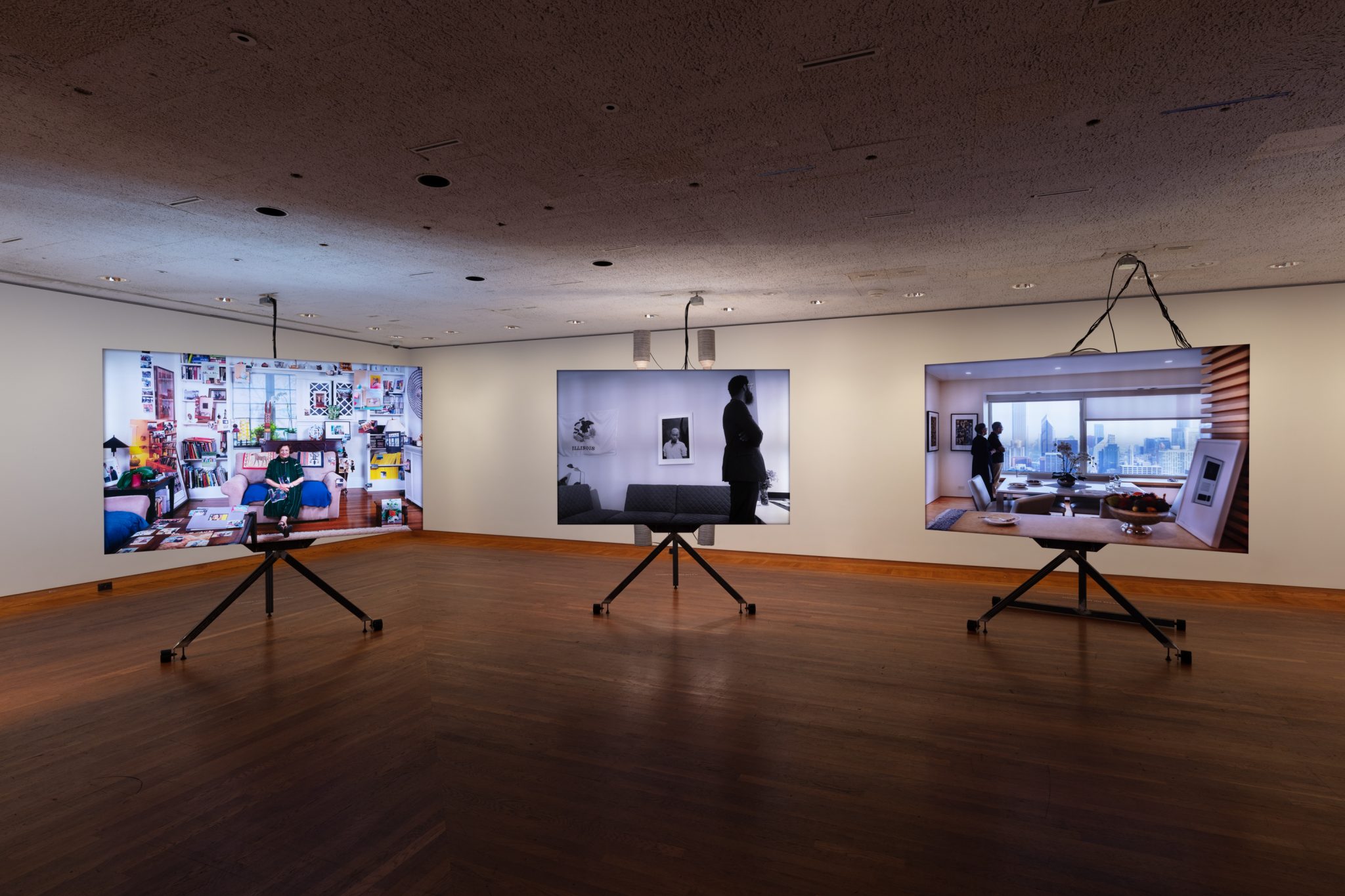 Through public, cooperative, transient architectural interventions like “River Assembly,” 2017, and “Cultural Transit Assembly,” 2018-19, Floating Museum works across the city, attempting to articulate the complexity of identity through writing, performance, sculpture and other art forms to bring about an understanding of how communities can inform frameworks for future public policy. Cooperative design meets artistic collaboration, what we encounter is an open-ended approach to a wide range of issues to expand and change the way we think about larger social fabric.

At the Art Institute, curators Liz Siegel, Grace Deveney and Matthew Witkovsky invited Floating Museum to identify pieces from the photography department’s archive of over 22,000 works, initiating a reciprocal curatorial process. “We still learn about new work every time we visit,” says Majeed. The impetus for the detournément was found in a Women’s Board program, when artworks were once available on loan through the 1950s to seventies. “The relationship between the Institute and its audiences once came from the spirit of generosity, and the spirit of funding young artists, like Ed Paschke’s career,” Schachman says. Through a series of guided virtual interviews with community hosts (screened in a rear room that I consider the heart of the exhibition), curators narrowed down works from the collection based on the life stories and concerns of individuals. 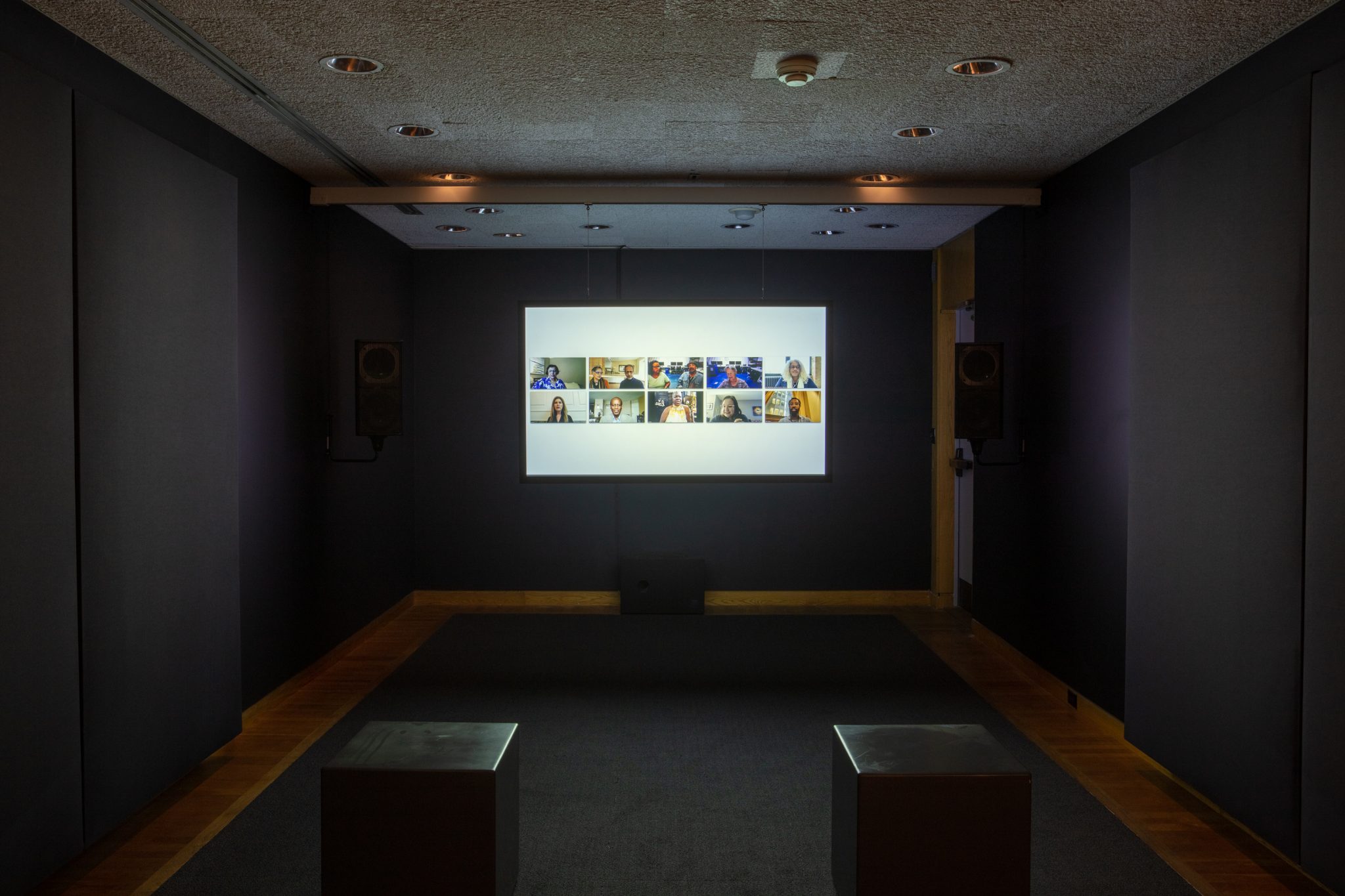 Siegel describes her experience in the process: “Take Joann Podkull Murphy, for example. She’s from the Southeast Side and spoke to us about being a teacher, about history, and about archiving a white, working-class, ethnic community. Her community was also one of the hardest hit by the Vietnam War of almost anywhere in the country because of the number of boys who lost their lives in service.” With this insight, three options were presented to the historian-sociologist from the Southeast Chicago Historical Society: a photograph from the Vietnam War, a Judith Joy Ross image or a Milton Rogovin triptych. Murphy chose the triptych portrait of a steelworker seen at the steel plant, as an Elvis impersonator and as a family man with his partner. Practicing curatorial acumen to make a gift for the individual, structural changes are evidenced through material exchange.

Interacting and reflecting on the dispositions of ten local community stakeholders, both museums paired artworks and guest photographers with artists, educators, arts administrators, patrons, activists and board trustees. Ten Chicago photographers were invited to capture portraits of individual hosts in their homes with their newly gifted pieces. “We were thinking about photographers whose practices could connect and riff with the hosts, but also of careers that were already on a trajectory,” says Majeed. “They would probably end up at the museum either way.” Shepherding unions between Vidura Jang Bahadur, Monica Boutwell, Tonika Lewis Johnson, Kirsten Leenaars, Sulyiman Stokes, Leonard Suryajaya, Nicole Harrison, Jonathan Castillo, Darryl DeAngelo Terrell, Guanyu Xu and the hosts, each artist was given a stipend to create work in their own distinctive style, moving away from the exploitative art world attitude of “doing what you love, so do it for free.” This consciousness of aesthetics and structural transformation, unique to the Floating Museum, allows us to consider material transaction as a signifier of change in a world moving from competition to solidarity, from egoistic pursuit to cooperative system-building.

Each portrait stands on legs with wires and bulbs exposed, rendering visible their functional and constructivist approaches to mining the vulnerabilities of a museum. The lightboxes sit on chassis-like frames composed of parts bolted together, allowing sculptures to be moved and reorganized. “We were thinking of adaptable frameworks,” Hulsebos-Spofford says. Individual atmospheric portraits stand testimony to the depth of newfound relationships between photographers and hosts. In “A lion to sing another into warmth and dream,” Suryajaya distinctly envelops Stephanie Harris’ environs in piquant, kaleidoscopic patterns creating a photomontage from which Harris emerges, bedecked in orange peels. In “To lion in December,” State Representative Curtis J. Tarver II is captured by DeAngelo Terrell. Seen looking out a window, his side profile contrasts the head-on gaze of a portrait by Zanele Muholi.

An integral part of the exhibition is that there are both material and immaterial works on display. While there is the infrastructure of the museum, there is the invisible infrastructure Floating Museum brings through conversation, communication and connectivity that produce artworks. The lightbox sculptures on the central exhibition floor are a collection of individual hopes and aspirations that run deep, rooting the work to the land. Layers of non-physical elements are richly impastoed through poetry in the form of wall labels written by young, on-screen audio-video conversations and a selection of B-roll photographs installed in a separate gallery, indicating market-based bullheadedness the collective and its collaborators began to encounter. 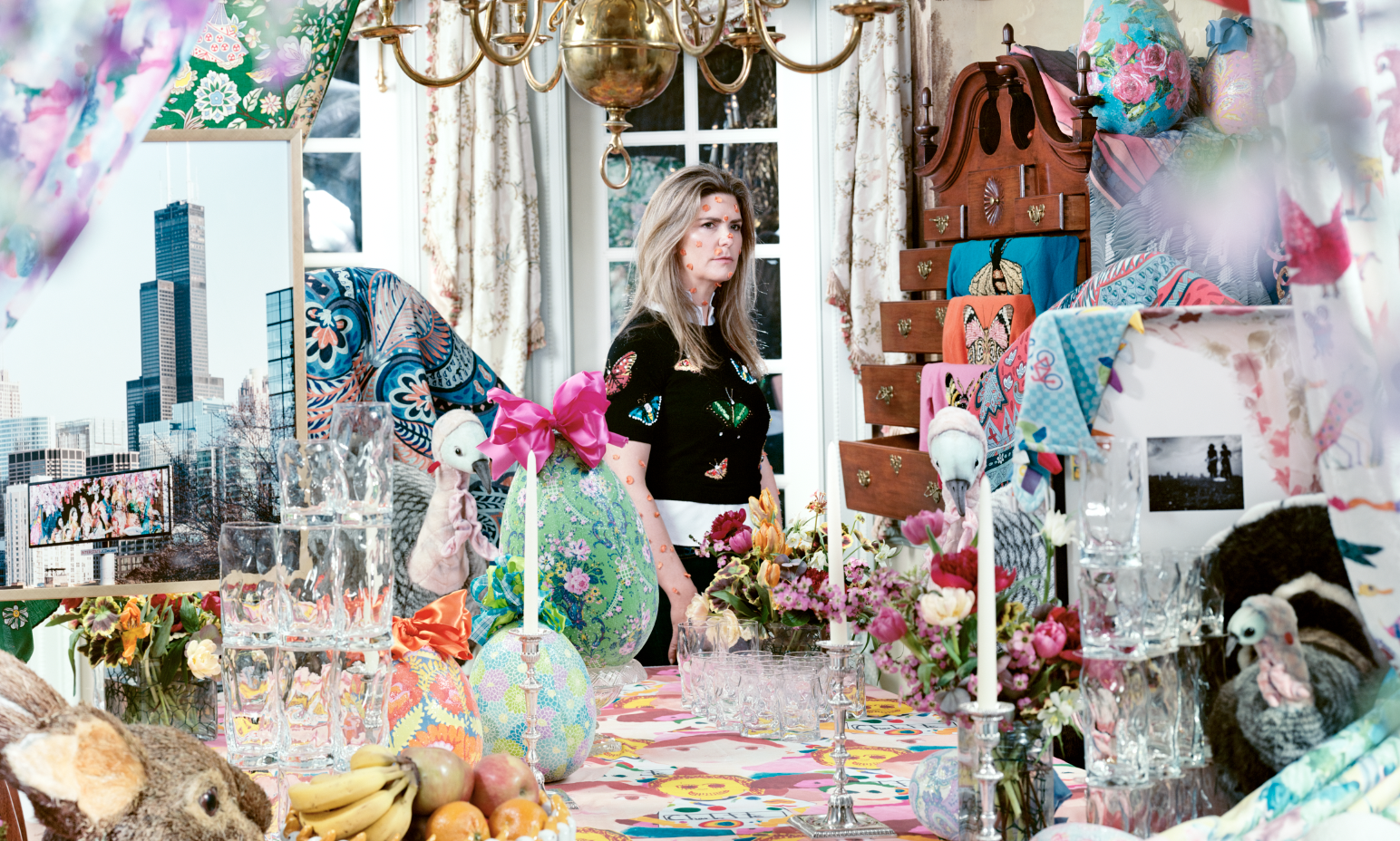 As roles relegated to the expertise of directors, curators and artists began to mix, there were complex decisions in selecting photographs to be reproduced before being given to their hosts. There were museum protocols to follow, not dissimilar to protocols Floating Museum have encountered while working with the city or the CTA. The question of limited editions, reproduction permits and the absence of film negatives (the paramount of authenticity in photographic work) created wheels within wheels as curators negotiated with artists and estates for works to be included in the Floating Museum’s vision. “The idea of an edition is a market-imposed structure. Typically ‘There will be no more of this work’ is not something given in writing. It’s an understood, implicit contract,” says Siegel. Associate curator Deveney was also surprised by market-based reactions, “Running into resistance around our ability to reproduce and recirculate things, I couldn’t see why someone wouldn’t want their work to circulate in this context.” As signifiers of what is possible (or impossible) in a culture that is fearful of abstract world-building, the accompanying selection of photographs are tangible results of a process of care carried out by both museums.

Using the exhibition as a space of negotiation, to shift the ways in which we define the public realm, “A Lion for Every House” is not only a place for identifying shared common ground between institutions and communities, but also a spatial exploration of people’s needs and aspirations, expressed in forms that point to alternative social meanings. In a city largely divided by neighborhoods, wards and constituents, the analogy of a shared dining table serves best in conversation with the collective. “We’re lucky to consider the museum as a diner at our table, learning and collaborating with us as we rehearse,” Schachman says. “I want to share food with the amazing people I come into contact with in this city,” says Majeed, “so we go to the best cooks for this meal. A community member is as much an expert on living in a community just as an artist is with a brush, or an architect is with a plan.” The Floating Museum’s exhibition—premised on community engagement, openness, platform building and playfulness—is a metamorphic territory, incrementally shifting attitudinal relations and behaviors in everyone touched by the collective process.

“Floating Museum: A Lion for Every House” is on view at the Art Institute of Chicago, 111 South Michigan, through October 17.