In preparation for the reviews that follow, the five incarcerated artists in focus—Juan Luna, Joseph Dole, Devon Daniels, Darrell Fair and Michael Sullivan—submitted handwritten notes detailing, from memory, the present locations of their extant artworks. As is the case for incarcerated artists across the United States, who have limited access to storage in carceral facilities, the products of each person’s artistic career largely reside in scattered archives maintained by loved ones beyond the prison walls. Works by the five artists were borrowed from mothers and former professors, texted to us in .jpg form by friends, and plucked from websites lovingly maintained by allies on the outside.

The majority of the artworks covered by Lori Waxman—art critic for the Chicago Tribune, who agreed to write these reviews as part of her ongoing 60 wrd/min art critic project—were made in conjunction with the Prison + Neighborhood Arts/Education Project, a justice-centered art and education program run out of Stateville Correctional Center, where all five artists reside. In addition to offering courses ranging from studio art and poetry to gender studies and political theory, PNAP facilitates a think tank, organizes public art projects and offers a degree program in cooperation with Northeastern Illinois University called University Without Walls.

Though all five artists work within similar material constraints, this series of artworks represents a range of individual concerns and styles. Most inevitably serve as a call against the apparatus of harm which has arisen from the United States’ overdependence on punitive justice. These reviews and other collective projects organized by PNAP are meant to serve as a bridge between those living behind prison walls, their systems of support at home and a broader public dedicated to a world less reliant on incarceration. (Gabrielle Christiansen) 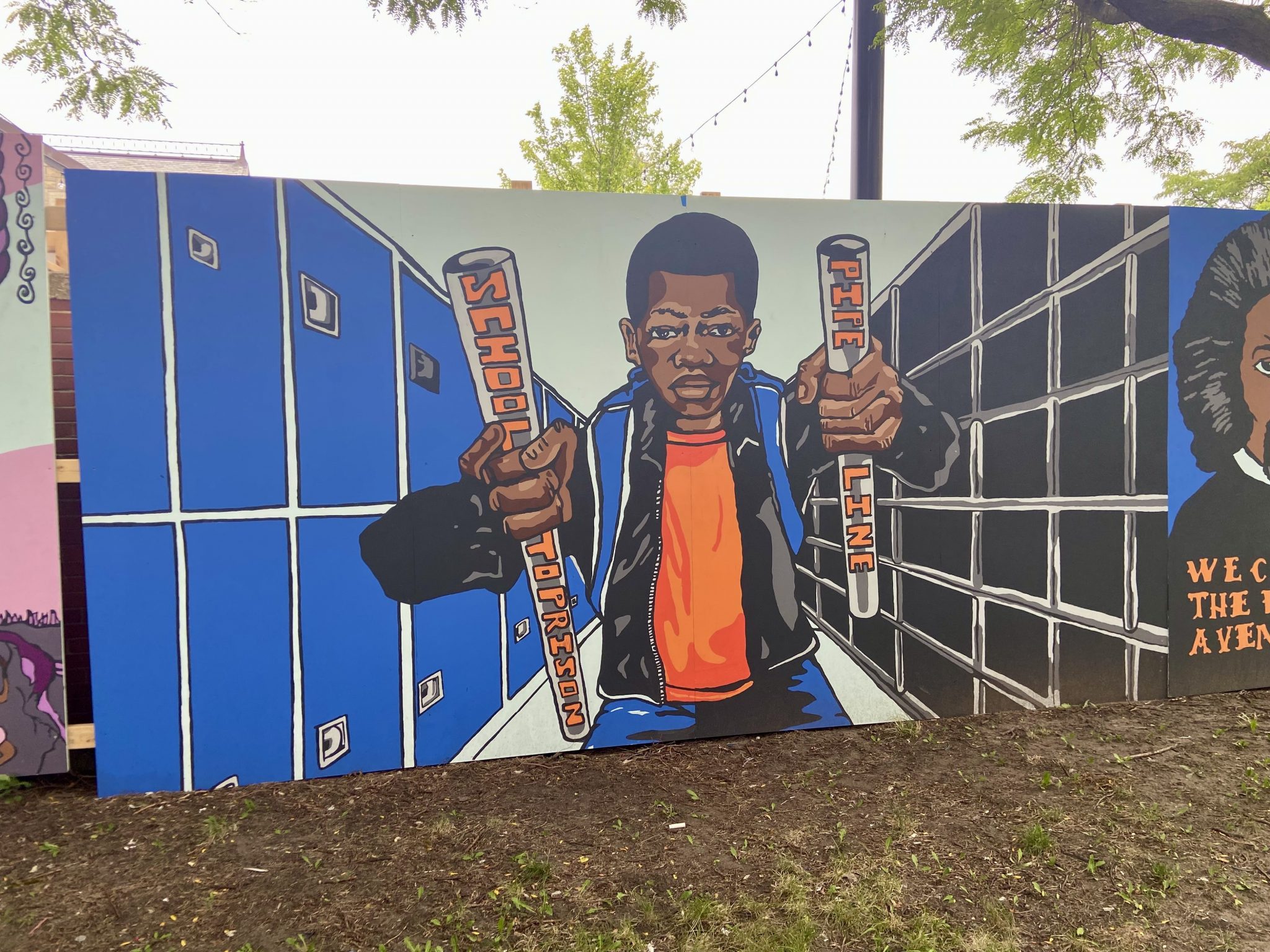 There’s no mistaking the causes of Juan Luna’s artwork: bring back parole in Illinois, extend the vote to the formerly incarcerated, get vaccinated, end solitary confinement, stop ICE deportations, know your rights. His drawings and prints are bold, their statements made in strong words and clear imagery. Their sincerity is palpable. Many feature a human touch—a hand holding the can spraying “Parole Illinois,” an aproned woman hammering down the border wall, an immigrant standing before an official—because it is humans whose lives are at stake. Even Luna’s “Get Vaxxed” campaign implies it, with a heart-thorny rose-ribbon combination that, if it weren’t pencil on paper, would be tattooed on a bicep. These are messages that need saying and need saying loud. Thankfully some are. Luna’s co-designed picture of an African American student literally breaking the school-to-prison pipeline in his young hands was painted by community members as an outdoor mural at the DuSable Museum in 2021. Colored and lettered with middle-school flair, the backpack-wearing kid stands at the vanishing point of a row of lockers and a wall of cell bars. I dare anyone not to care. 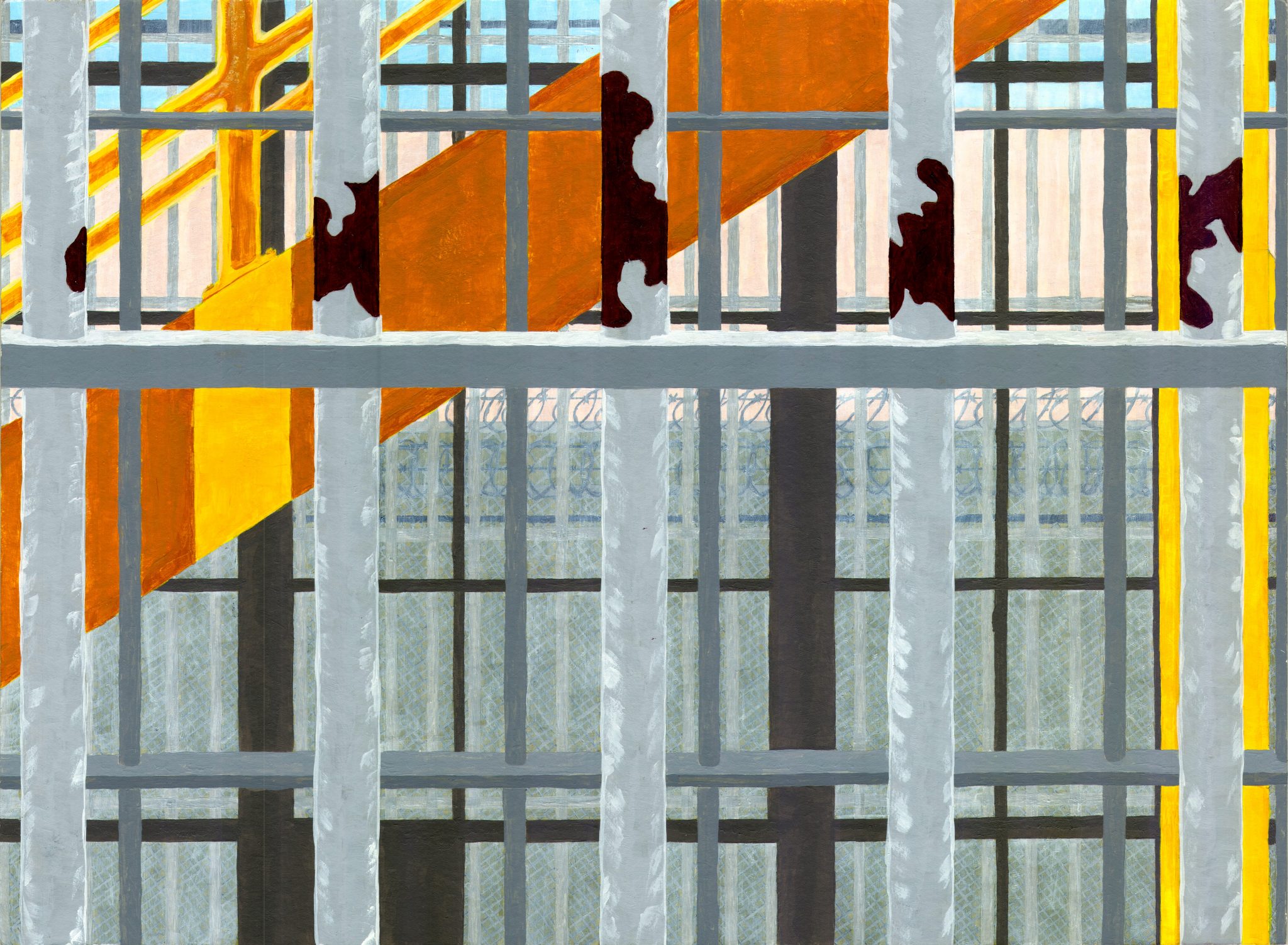 Lifetime imprisonment is one of the great cruelties of American civilization. So grotesque as to be nearly unimaginable, if it is ever to be rectified it must first be visualized, a task that Joe Dole, cofounder of Parole Illinois and a prisoner for nearly twenty-five years, is achieving through activist artworks of diverse emotional affect. He can be funny, as in a trio of audacious posters critiquing former Cook County prosecutor Anita Alvarez, wherein she buries “FOIA,” the Freedom of Information Act, and has a janitorial closet stocked with bottles of “white wash” and a trash bin full of “police accountability.” He can be powerfully lucid, as in a pair of infographics that marshal horrifying data about the increase in prison populations since Illinois abolished parole in 1978. He can be harrowing, as in a hand-drawn animation, from the multi-artist “Freedom/Time” video, depicting a man aging and dying behind bars while, on the outside, his daughter grows up, marries and delivers a baby right back into prison. And, in a recent painting that depicts his cell view—an infinite grid of bars over barbed wire over more bars, with little squares of sky blue visible at top—Dole echoes the jazziness of Piet Mondrian’s “Broadway Boogie-Woogie” with his very own indomitable lyricism. 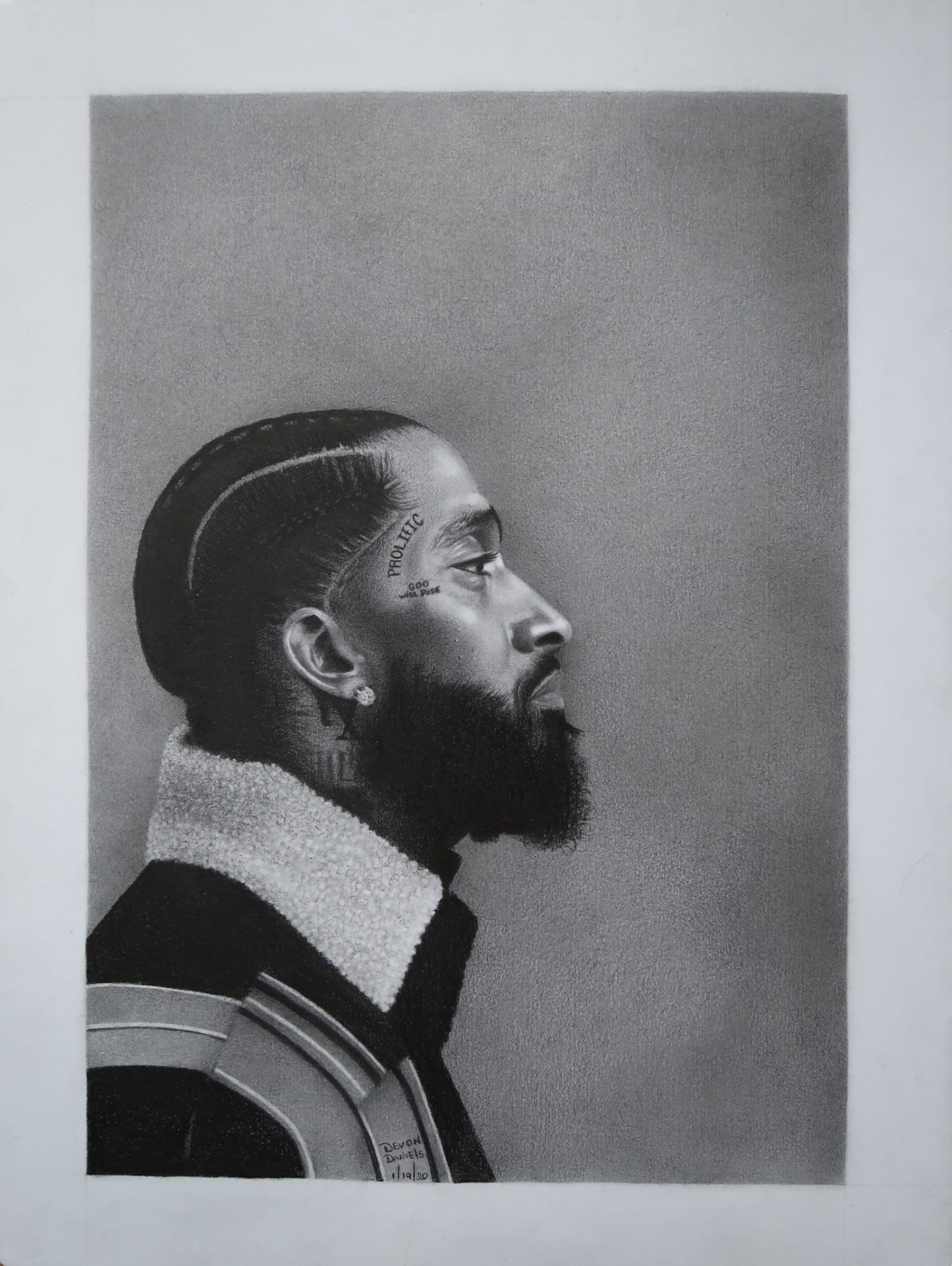 Is there a more intimate medium for portraiture than pencil on paper? I believe this to be true for sketches and caricatures, but especially for photorealistic drawings, where every pore of skin, every strand of hair, evidences the careful observation and intentional mark-making of the artist. Consider the work of Devon Daniels, who first discovered drawing while incarcerated and continues to practice it after twenty-five years on the inside. His likenesses of Kerry James Marshall, Dr. Margaret Burroughs, Nipsey Hussle and Malcolm X reveal respect and affinity on the part of the artist, as expressed through the significant time, patience and care needed to execute such meticulous images. To make a picture in this style is to express admiration or devotion through graphite, much as Charles White did for his African American subjects, much as Vija Celmins does for the night sky. Daniels, not unlike Celmins, must represent his beloved subjects from a distance—him from behind bars, her able to see but never touch the sky—but in the act of representation, that distance is hopefully, at least partially, breached. 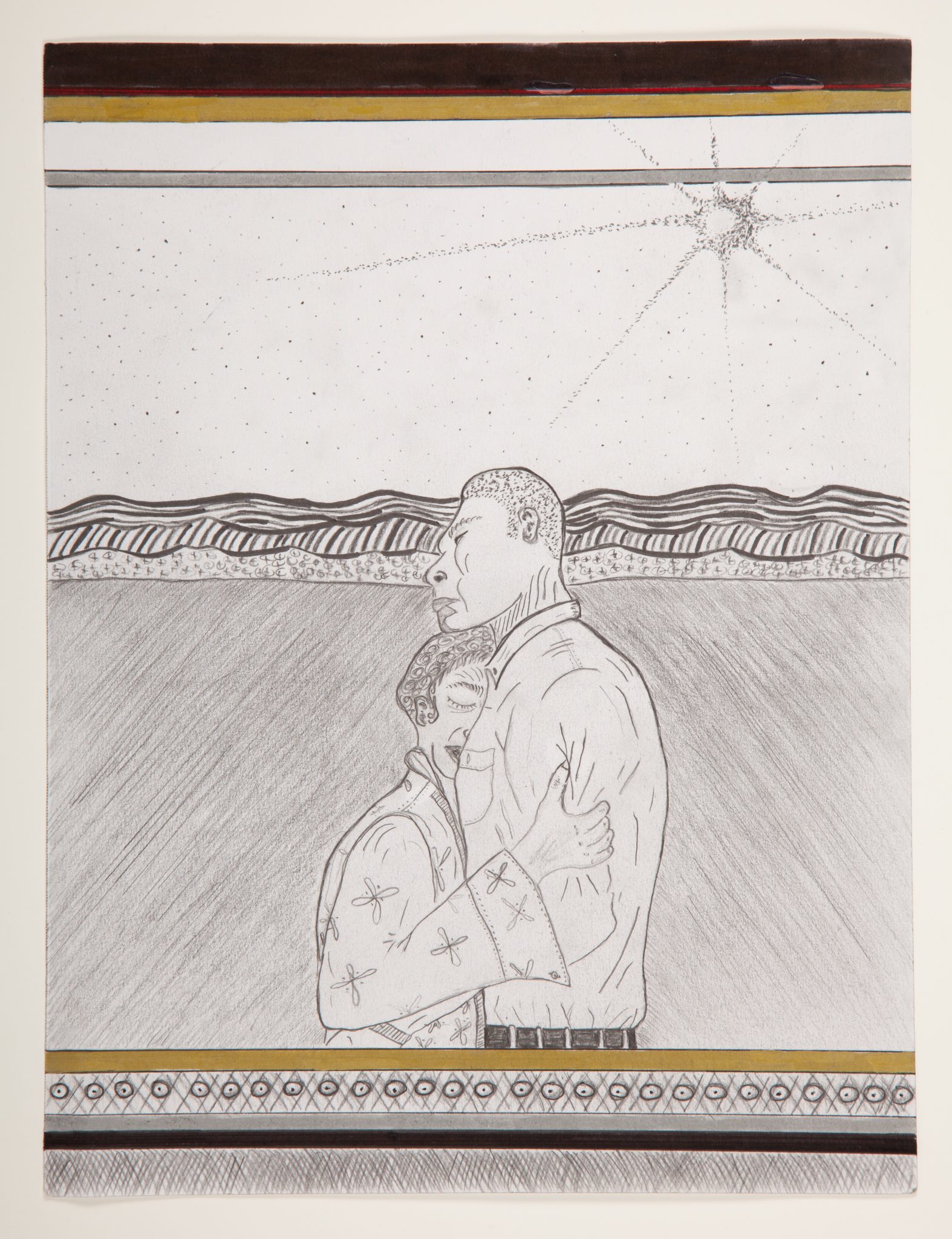 What can one individual, required by tough-on-crime laws to complete all fifty years of his sentence, offer from behind bars? Through his artworks, Darrell Fair contributes to a large and diverse community. Inspired by the devastating poetry of Jumah al Dossari, a Bahraini citizen wrongfully detained for five years in Guantanamo, Fair drew a sanguine counterimage, imagining the tender reunion of an incarcerated man and his long-lost wife, clutching one another in an anywhere landscape of repeating patterns. Moved by the experience of a cellmate, who watched a fatal hostage situation involving his daughter unfold on the television news—and was later denied permission to attend her funeral—Fair hand-drew an animation sequence that explicates the heartbreaking alienation of being cut off from family. And in two collaboratively-designed, community-painted murals, he provides neighborhood amelioration of the most meaningful kind: in North Lawndale, a reminder that strong children are the “faces of hope”; in Washington Park, a tribute to Dr. Margaret Burroughs that insists, through Fair’s image of a spiraling clock, that the time—for justice, for community, for beauty—is now. 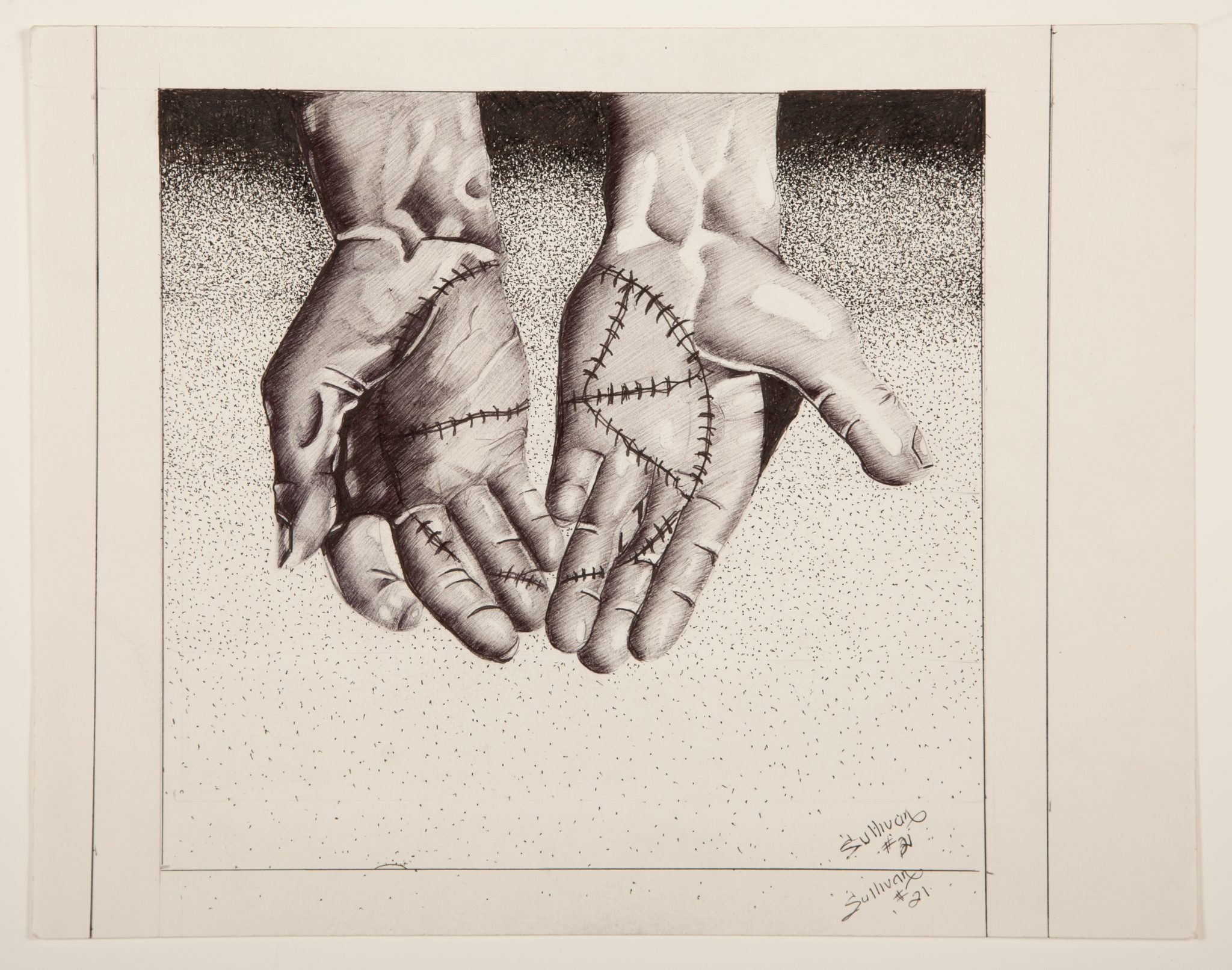 The meaning of a still life is traditionally communicated via standardized symbolic elements. These can be learned in an art history class, to be sure, but many can be intuited simply by looking, thinking and feeling. Mike Sullivan draws and paints tender-hearted and poignant still life pictures, images whose significance is complicated by knowing that he has been locked up for over thirty years, during which time he has earned school degrees and helped draft House Bill 2541, which provides non-partisan voter education as part of the IDOC exit process. A basket of fresh-picked apples, the leaves still green, so neatly sketched in color pencil; a vase of cut flowers, in full bloom, smoothly painted in oils; two happy, hugging grandchildren, fastidiously etched in pencil—Sullivan can touch these familiar subjects, share them, know them through the artwork’s picture plane, but not directly with his own hands. And hands are vital: to everyone but especially an artist, a sentiment Sullivan unsparingly depicts in pointillist style, inking a pair of palms, deeply scarred, their wounds coming together to form the peace symbol. As wounds, with enough time, care and resources, can do.