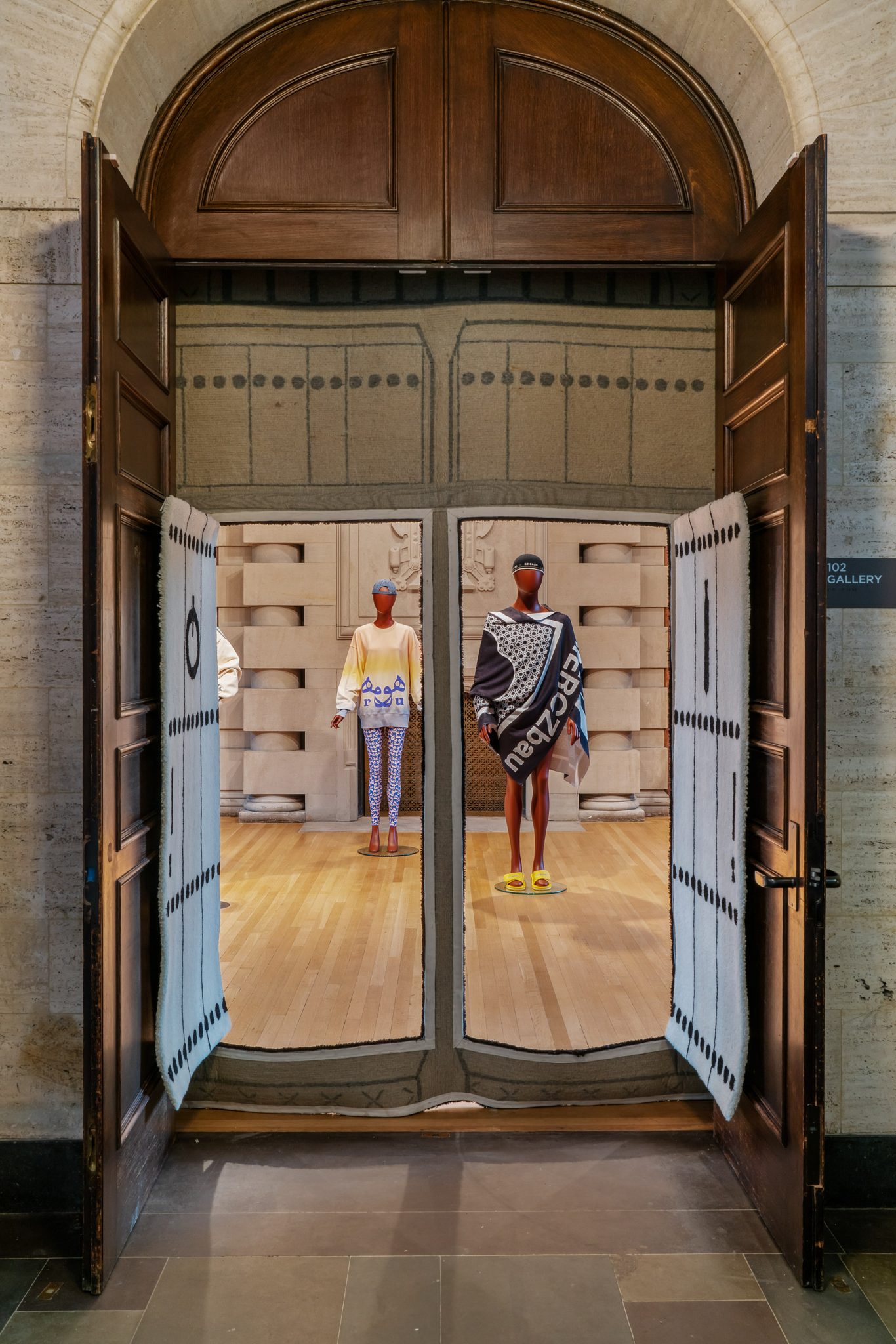 Berlin-based artist collective Slavs and Tatars dedicate their practice to excavating the intermix of history, culture and ideology in the geographic expanse of Eurasia. Their work consists of research projects that manifest as installations, publications and lecture-performances, often suffused with tongue-in-cheek humor. For their exhibition “Merczbau” at the University of Chicago’s Neubauer Collegium, the collective has turned their attention to the historic redrawing of the borders between Ukraine and Poland after World War II, when the Polish city Lviv was incorporated into the then-Ukrainian Soviet Socialist Republic. In this redrawing of East-West divides, the city’s Polish population was involuntarily relocated to the Polish city of Wroclaw.

“Merczbau” takes shape as a boutique-cum-college-bookstore stocked with imagined merchandise for the long-defunct Department of Oriental Studies of the former Jan Kazimierz University of Lwow. After the redrawing of borders, Polish scholars were forced to leave the university and the department did not survive their exodus. Speculating what might have been had the department remained intact, Slavs and Tatars offer imagined collegiate swag for Orientalists in the Slavic East looking further eastward. At the start, an alternative doorway crafted from carpet weave and modeled after Islamic architecture covers the entrance to the gallery. Part Balenciaga-esque chic, part collegiate casual, the displayed “mercz” is rich with the visual and linguistic play typical of the collective’s work. Brightly colored slides are branded with two possible transliterations of Bismillah (“in the name of God”) into Ukrainian. Lions are a motif, referencing both the emblematic lions of Lviv and the lion as a prominent visual in Shia Islamic iconography. On one sweatshirt, a lion is cheekily depicted reading from a book text “Allah loves you.” Many of the works also draw lines to the exhibition’s context in Chicago, home to its own Ukrainian and Polish communities. Several of the mannequins wear knit skull caps embroidered with transliterations of “Chicago.” Another dons a bright bibliography-printed scarf appropriately following the Chicago Manual of Style. 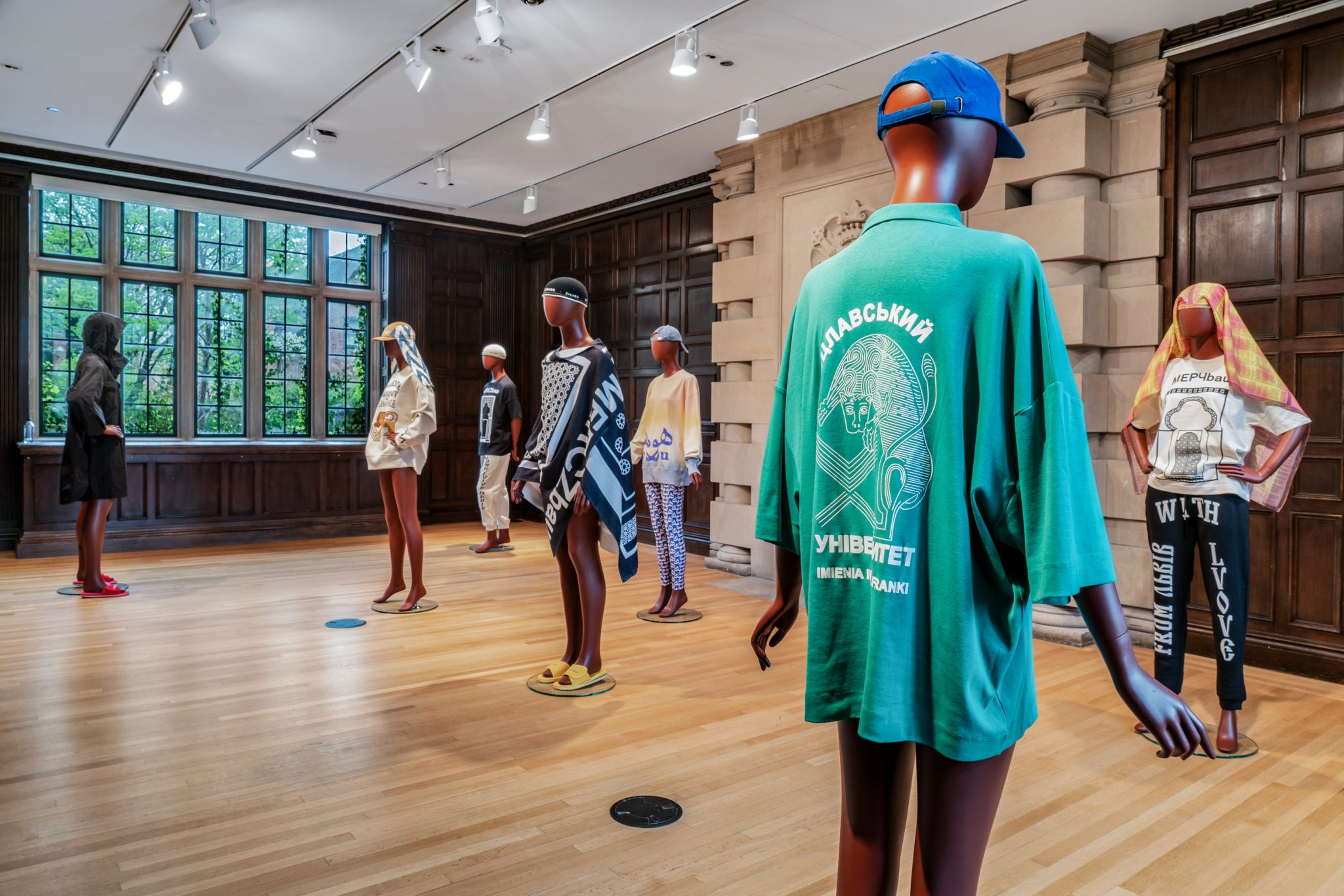 The exhibition’s title makes a nod to German Dada artist Kurt Schwitter’s “Merzbau” (1923-37), where he transformed the interior of his studio and home into an evolving sculptural environment before it was destroyed in a British air raid in 1943. Here, Slavs and Tatars’s own interior installation intervenes in the august interior of the Neubauer Collegium. Housed in a collegiate gothic-style building, the exhibition space is paneled in dark wood punctuated by ivy-shaded leaded glass windows, a heavy gray stone fireplace with a prominent carved seal, and Greco-Roman columns embedded in both the stone hearth and wood paneling, all hallmarks of an imagined Western European lineage. Cyrillic and Arabic script and Eastern-oriented imagery stand in generative friction with their surroundings. In reviving the story of a far-off academic institution, the collective’s installation at the University of Chicago opens space to envision what it might look like for our own institutions to draw on a different cultural imaginary. Or, at the very least, enact contemporary solidarity. Responding to the present-day displacement of scholars from Ukraine, all of the “mercz” of the “Merczbau” is available for purchase with proceeds going to support Scholars at Risk.  (Sarah Dwider)

“Slavs and Tatars: MERCZbau” is on view at Neubauer Collegium, 5701 South Woodlawn, through October 7. You can register for their closing event, Reflecting on MERCZbau: Art and Human Rights in Ukraine, here.