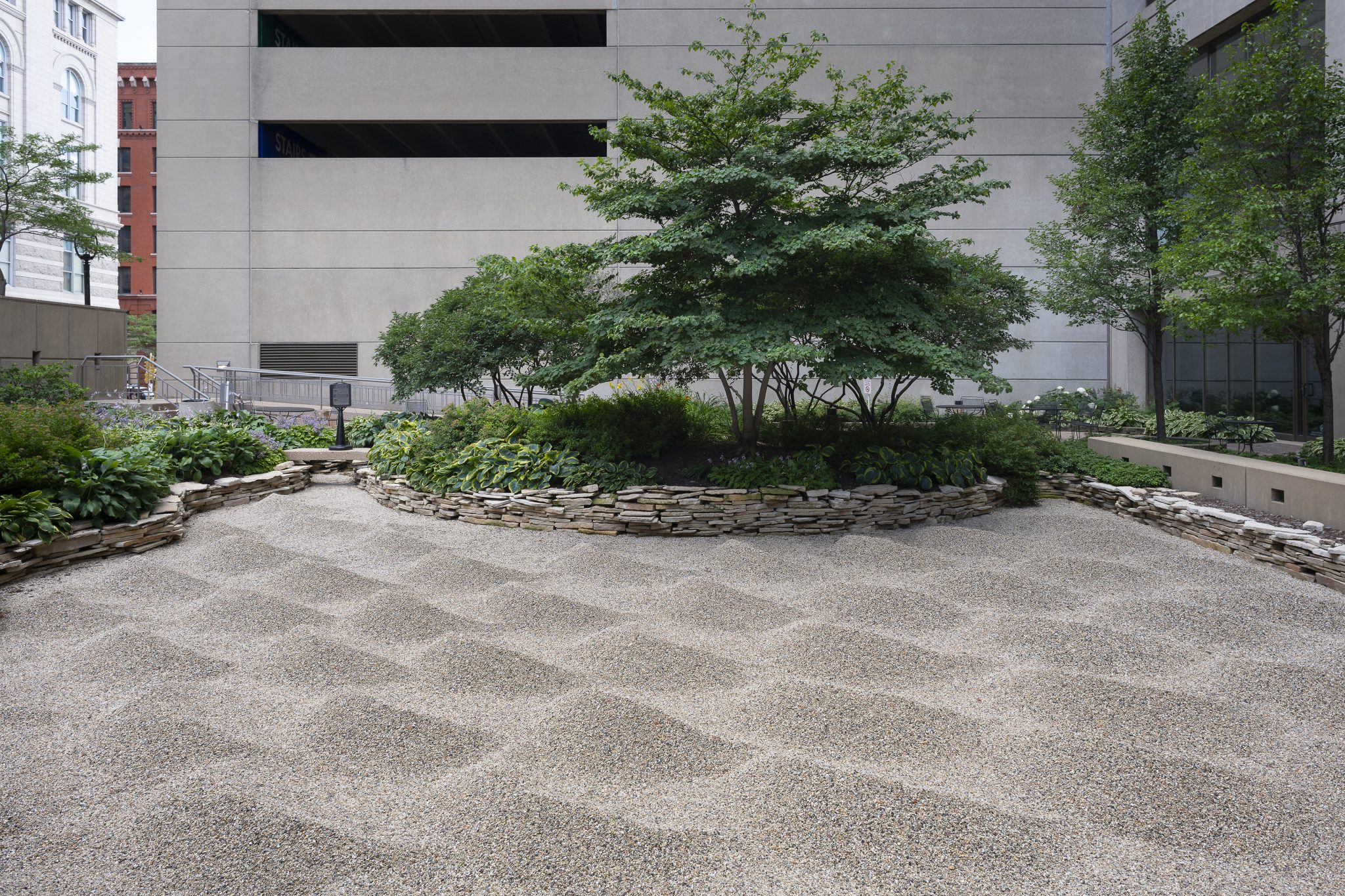 Below a thirty-story office building in downtown Milwaukee, a fountain in the adjacent sunken courtyard is turned off. In place of water, a ripple of rock fills the emptied basin. Resembling the quiet passage of waves, the gravel bed proceeds in uniform crests and troughs oriented at a diagonal. These pebble swells are not the consequence of rough winds, or the pull of the sun or the moon, but the sculpting of human hands. Conceived by acclaimed architect and artist Maya Lin, the installation, “Courtyard Sea” (2022), revives her preoccupation with billowing artificial topographies. Known for colossal interventions that permanently alter the contours of the landscape, such as the monumental grassy wave field spanning eleven acres at Storm King Art Center, Lin’s recent rocky body of water most closely resembles an earlier, transient work, “Il Cortile Mare” (1998), in the courtyard of the American Academy in Rome. Compare documentation and the courtyard installations are largely the same. Separated by two decades, the minor, if not crucial difference between these two works is the impulse. The addition of fresh gravel spontaneously prompted Lin’s provisional contribution to the arcade of an early-twentieth century palazzo. She was responsive to the site’s changing conditions. However, “Courtyard Sea,” beautifully executed within analogous constraints, carries on the form, but lacks an active link between site and stimulus.

Part of the 2022–2023 edition of Sculpture Milwaukee—an annual public art exhibition launched in 2017—Lin’s installation joins a cluster of artworks made of and in relation to the natural world. Curated by artist Ugo Rondinone, the fifth iteration, “Nature Doesn’t Know About Us,” assembles a roster of eighteen artists loosely aligned under the heading of environmental art. Some artists literally engage the earth, getting their hands dirty with plants, soil and rock, while others take a more poetic approach, aping nature with manufactured materials. Save for a few recent artworks, such as Klara Liden’s sundial constructed from signs and parts of an industrial vernacular, as well as a Joan Jonas-crafted six-foot measuring stick from 2020—the exhibition highlights past projects reintroduced in the city of Milwaukee. 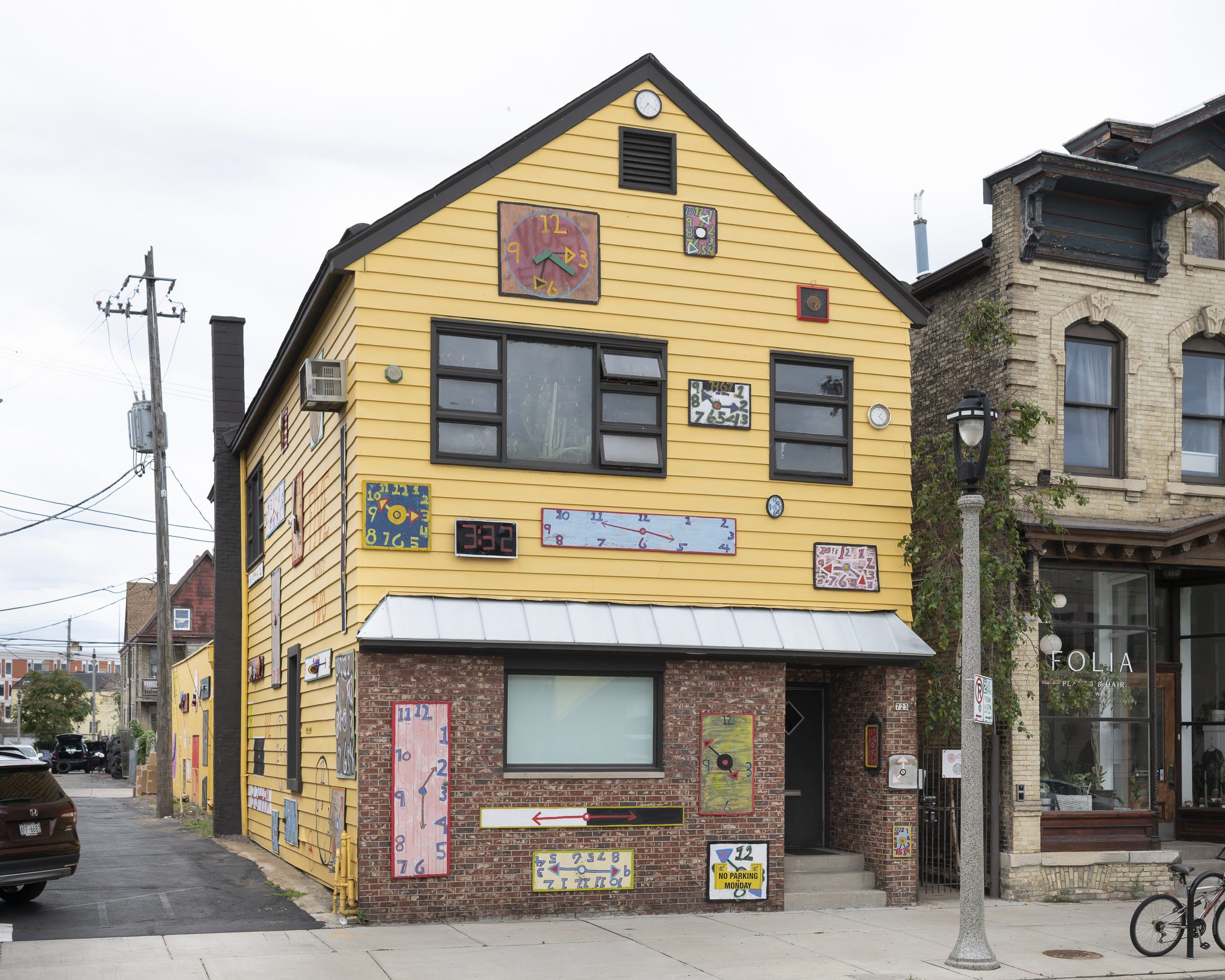 The recirculation of work is not so peculiar: artists adopt formal idioms and often explore and exhaust successful ones. Here, the historical artwork’s explicit affinities with its original site differentiates artistic intent and curatorial strategy. Over a third of planned projects represent reconfigurations of previously site-specific works. Tyree Guyton’s installation of offbeat clocks visible on the mustard-colored façade of artist-run gallery The Suburban expands upon his earlier experiments with time-based imagery. His 1986 mold-breaking art environment “The Heidelberg Project,” inspired by and integrated into abandoned lots and buildings on Detroit’s east side, gave way to further site-specific installations, but it is along Heidelberg Street where Guyton first affixed whimsical timepieces to trees and other unorthodox supports. His project for Milwaukee can be traced to a 2017 Mural Arts Philadelphia commission “THE TIMES,” in which his signature clock faces spanned the walls of a vacant building. His latest work suggests that, like time, site-specificity is relative.

When asked about the choice to recycle past forms, Rondinone underscored the consequence of the works on view: “We are presenting works of great art-historical significance in the unifying context of the exhibition.” Indeed, the curatorial project aligns more closely with a historical survey typical of a museum. Rondinone went on to confirm these aspirations, comparing the endeavor to a “formal exhibition without the physical infrastructure of an institution.” So, what is to be made of this outdoor exhibition with indoor ambitions? 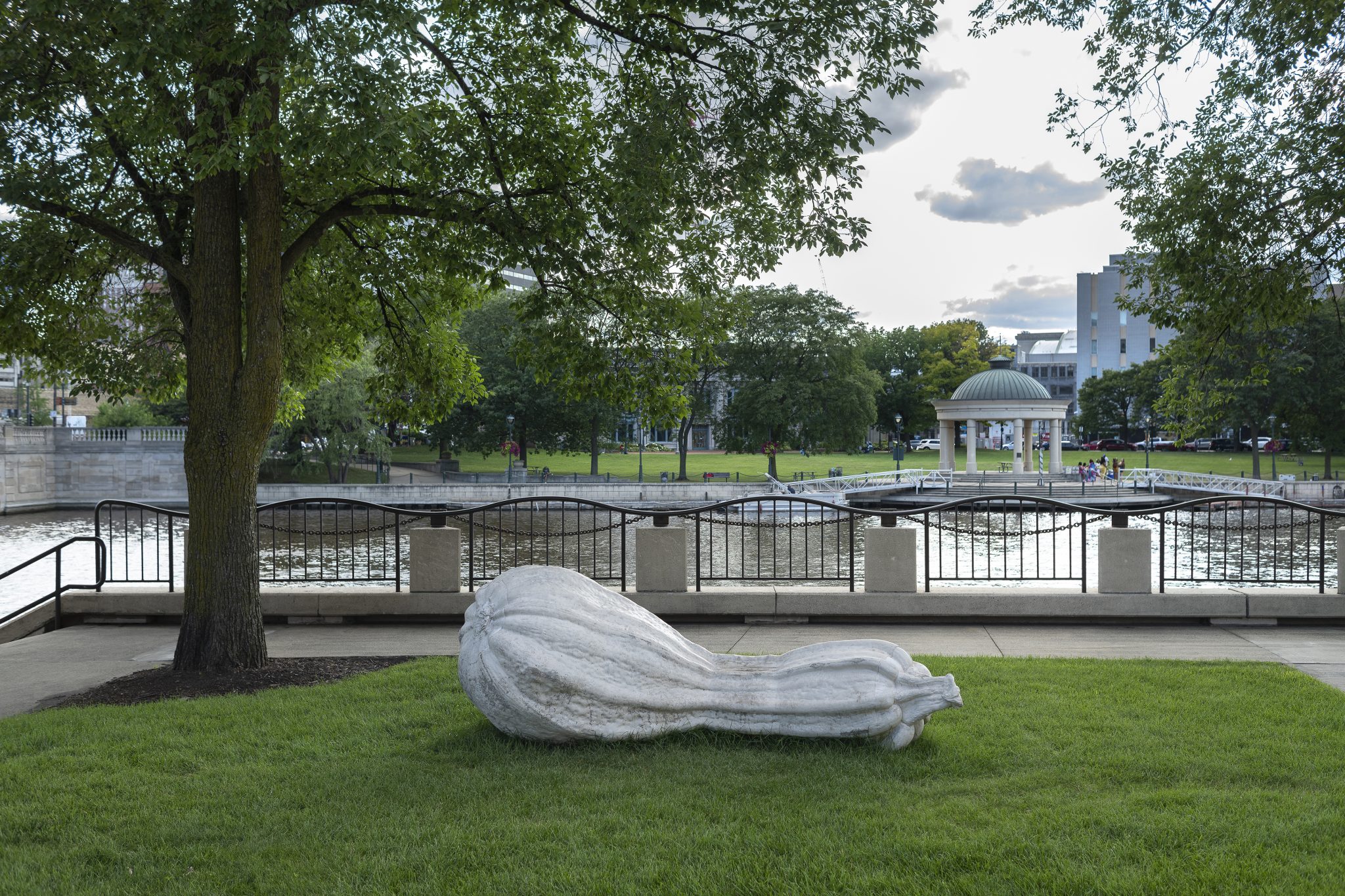 Public sculpture appeared inside and outside of the city over the course of the twentieth century. Gaily plopped on a patch of green, sculptures have long occupied gardens and parks as resilient lawn ornaments poised to weather sun and storm. These spaces are not only zoned but landscaped for sculpture—a paver and plinth here, a round of mulch there. Whether rural or urban, the park has proven such a casual and commonplace environment for artistic installations that one might conjecture, grass is to public sculpture as white walls are to abstract paintings. But beyond these machinations of the garden variety, the twentieth century saw the rise of sculpture in urban contexts. International recurring sculpture exhibitions, from Sonsbeek in the Netherlands to Skulptur Projekte Münster in Germany, realized the cyclical integration of art into the infrastructure of urban identities. Adjacent to formal exhibitions, municipal programs such as Philadelphia’s Percent for Art Ordinance, piloted in 1959, mandated a portion of real estate development and construction budgets be allocated toward site-specific art projects. These civic programs and exhibitions, which codified and popularized public art as an integral part of city life, and aligned with campaigns of revitalization and urban renewal, coincided with the individual pursuits of artists in the sixties and seventies who pioneered site-specific practices made in and out of undomesticated landscapes, commonly known today as land art.

Art historian and curator Miwon Kwon described these shifting sites of public sculpture in her seminal text, “One Place After Another: Site Specificity and Locational Identity” (2002). Alert to the prevalence of the term site-specificity and its associated locutions and permutations in the art world, Kwon sought to articulate the unraveling of the grounds upon which site-specific practices originated. Part of the destabilization of the urban site, as Kwon notes, can be attributed to the flattening of the perceived unique character of cities. Moreover, the kind of sculpture that readily conformed to the agenda of city life made itself an accessory to metropolitan conventions, consequently blending in rather than standing out. 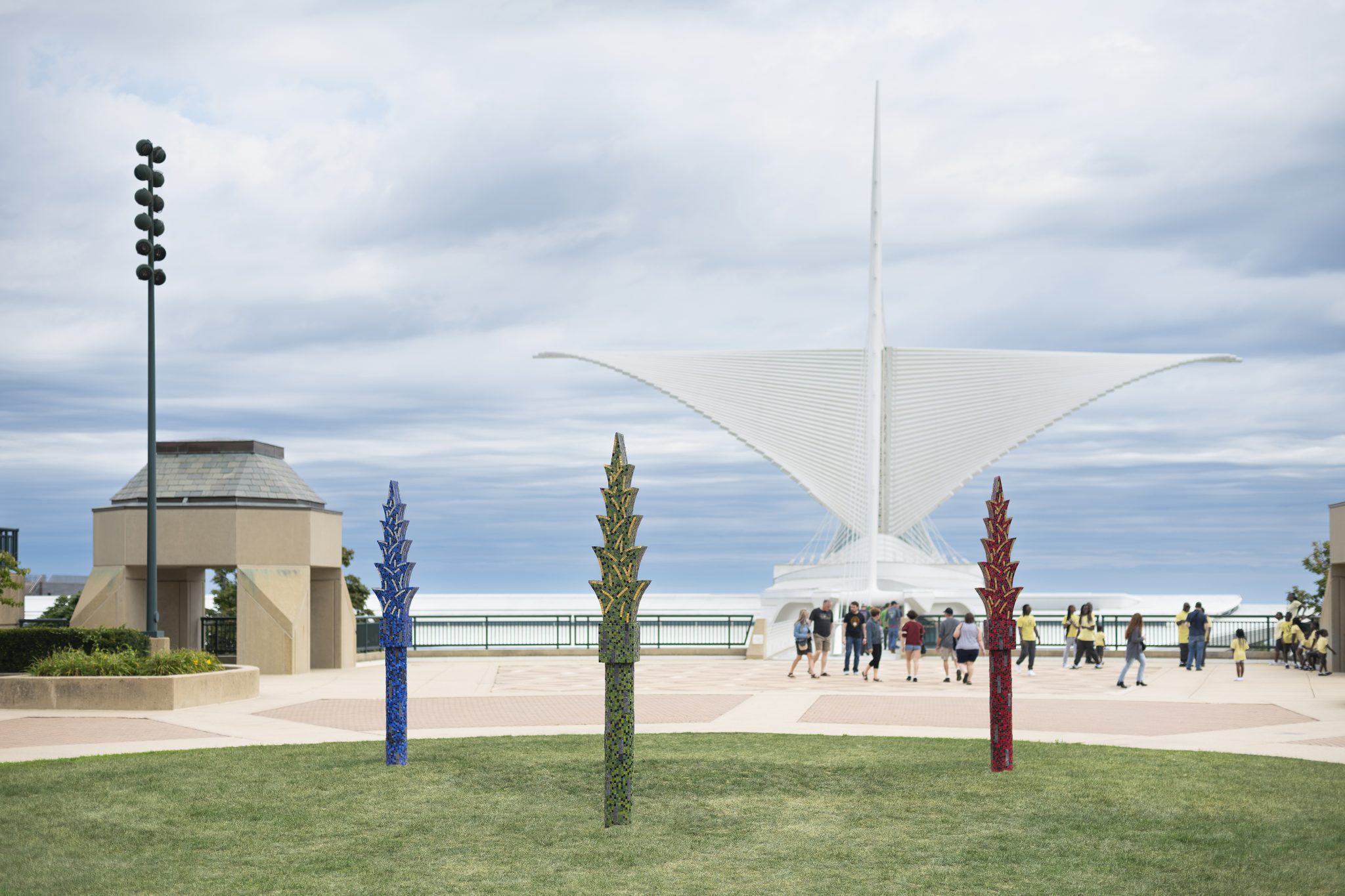 This thesis is wholly intelligible when considering the function of urban art initiatives. In an essay examining the spatial politics of urban art initiatives, “Uneven Development: Public Art in New York City,” published in October in 1988, and later adapted in her pivotal volume “Evictions: Art and Spatial Politics,” art historian Rosalyn Deutsche wrote, “This is the real social function of the new public art: to present as natural the conditions of the late-capitalist city into which it hopes to integrate us.” To visualize this premise, consider Ned Smyth’s “Upper Room” (1986), designed for Battery Park City, in which an imaginative columned court of concrete, bluestone and mosaic surrounds a long table with cylindrical stools. Public projects such as these sought to position art as an extension of architecture, offering a service and performing a purpose. This civic sculpture supplanted form for function and reasserted the serviceable capacity of the city. Moreover, works such as these were readily assimilated into the built environment, be it parkways, plazas or lobbies—take Milwaukee’s River Sculpture initiative established in the nineties, which turned the riverwalk into an outdoor art gallery, thus championing industry along the city’s waterway. The city works and so does its sculpture. The effect is quite different from Smyth’s red, green and blue spiky columns installed this summer just west of the Milwaukee Art Museum; conspicuously colored and glittering, the glass mosaic-adorned posts resemble alien plant species sprouting from the earth. Ornamental in nature—detached from any recognizable function—Smyth’s mystical, spiny stalks, do little more than relish in the inspiration that organic forms afford.

And this is the case with many projects in “Nature Doesn’t Know About Us”: the art contends with nature in broad strokes. Somewhat apathetic to what a sculpture can be or do in relation to a specific place, individual artworks contemplate the expansive scope of lived experience at an intimate scale. Introspective, this art looks inwards to comment outwards. Some works coyly pontificate on the conditions of urban life, but their functional capacity is limited or irreverent: Arthur Simms’ “Real Estate for Birds?,” first realized in Brooklyn’s Prospect Park in 2007, offers dinky houses for birds set atop a utility pole. The question mark in the title of the work sets forth an inquisitive tone—do birds really need real estate, or is the city, the sky and all the environs that one may fly to already theirs for the taking?

Looking ahead, visitors can look forward to a new iteration of artist Agnes Denes’ mammoth wheatfield installation, planned for spring 2023. An homage to her 1982 work, “Wheatfield—A Confrontation”—in which the artist planted two acres of wheat atop a landfill on the western tip of lower Manhattan that was slated for urban redevelopment—the new work, comprising wheat and sunflowers, will be harvested by the community in fall 2023, concluding Rondinone’s sixteen-month cycle of sculpture in the city. 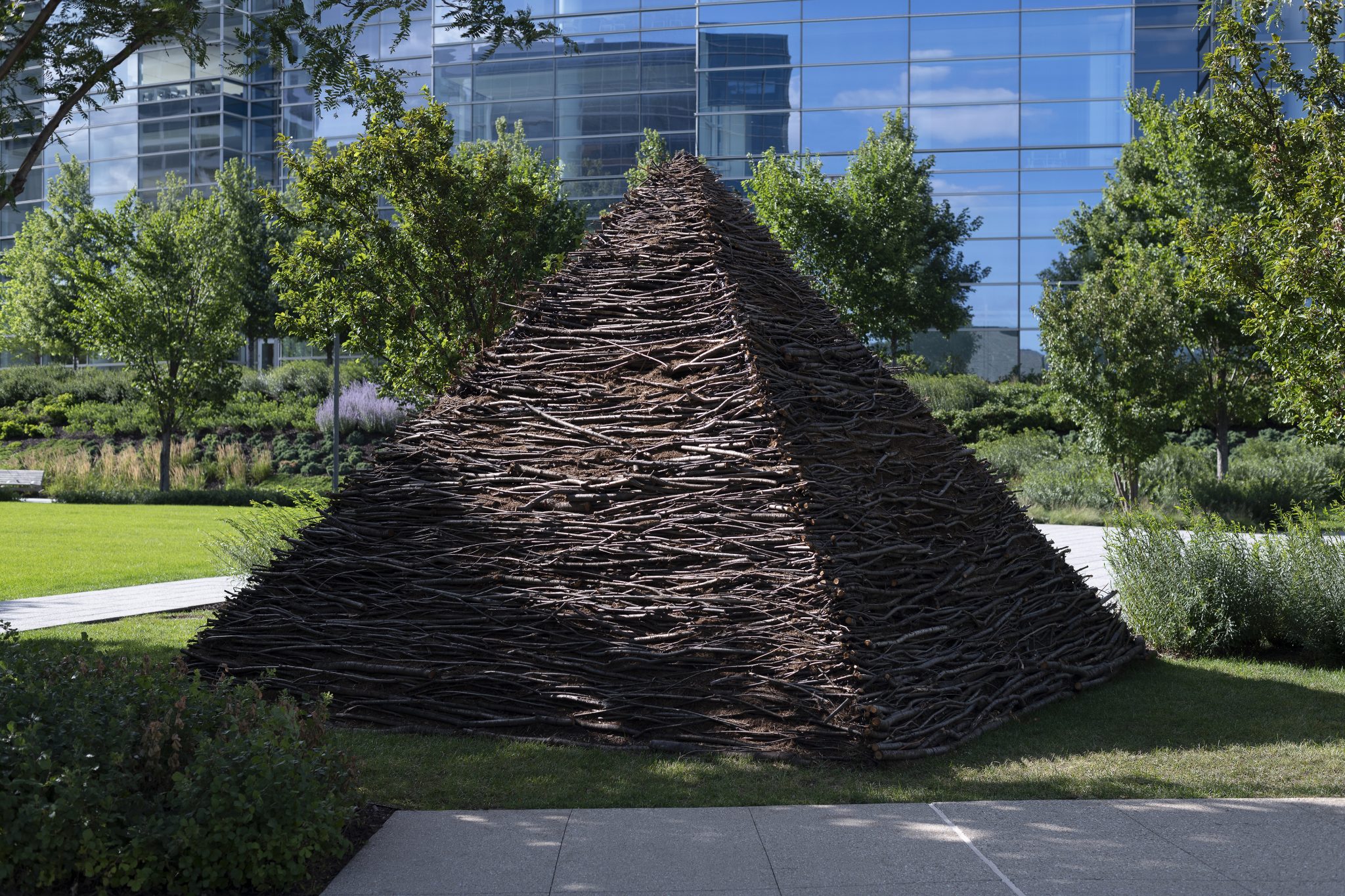 But there is revelry and wisdom to be reaped in works of a modest scope. Maren Hassinger’s “Pyramid (Monument)” (2022), rests on a neatly landscaped plot of grass in the Northwestern Mutual Gardens. Beneath the imposing sheen of a glass and steel skyscraper, Hassinger’s woven branch sculpture seems dainty. But no matter its unobtrusive stature, the square pyramid form recalls prodigious and enduring edifices from around the globe. The construction straddles the natural and the man-made. Beyond its apparent discord with the scale of its surroundings, the work presents an internal conflict: look closely at the piles of tree boughs and dirt, and its structural integrity relies on artificial supports, including metal poles, wire netting and plastic zip ties. The work is elegantly honest about its essence. No matter that it’s manufactured; the structure still holds. And nature has its flaws: as I looked intently at the bark peeling off a twig revealing rings of warm wood, it reminded me of the flaking of orange paint on a neighboring steel sculpture by Mark di Suvero. It’s here, in these distinct yet corresponding moments where nature wears away at us, that our humanity, and all its attendant peculiarities and fragilities, is laid bare.