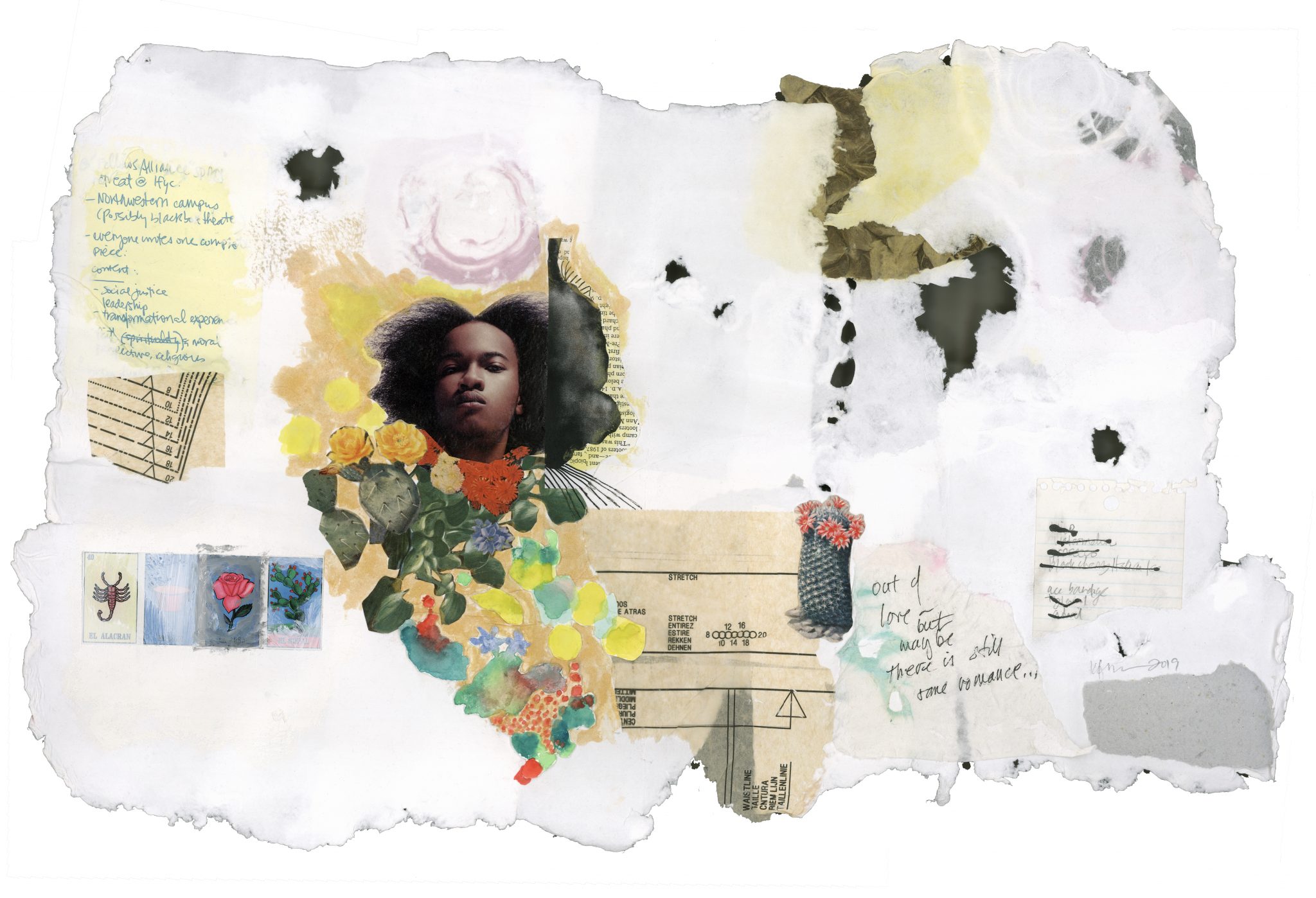 A poet, visual artist, Afrofuturist, performer, Afrosurrealist, writer, generous collaborator and Chicago mainstay; one might think Krista Franklin has had an abundance of solo gallery and museum shows in her multifaceted career. This is not the case. DePaul Art Museum’s long-overdue “Solo(s),” curated by Ionit Behar, is Franklin’s first individual exhibition within the white walls of a museum.

Franklin’s Chicago career is marked by collaboration and interdisciplinary making. Her 2015 solo show, “Like Water” took place at the Center for Race, Politics, and Culture at the University of Chicago, a multidisciplinary academic, community and research space. “Like Water”’s subject matter (shapeshifting as a vehicle to explore and illuminate the self), Franklin’s work is fluid, transformative in theory and practice. Her practice is cultivated from a material, bodily change: a process which translates to a corpus of work where a change in medium is always urgent, always necessary, but the message remains the same. Franklin’s subject remains constant amidst the valences of her practice, as she is the message. The question of the hour: who is Krista Franklin? The artist’s past, her present, her memories, her dreams, her possibilities, her family, what it means and what it could mean to be Black and a woman in this space, in any space, are animated, excavated and celebrated throughout her work. This is a song of the self rarely seen within white walls. “Solo(s)” is a vital window into the practice of a thinker and maker who has forged a unique and valuable body of work. “Solo(s)” illuminates the beauty of a self created not in a vacuum, but through the starts, stops and touches of others. 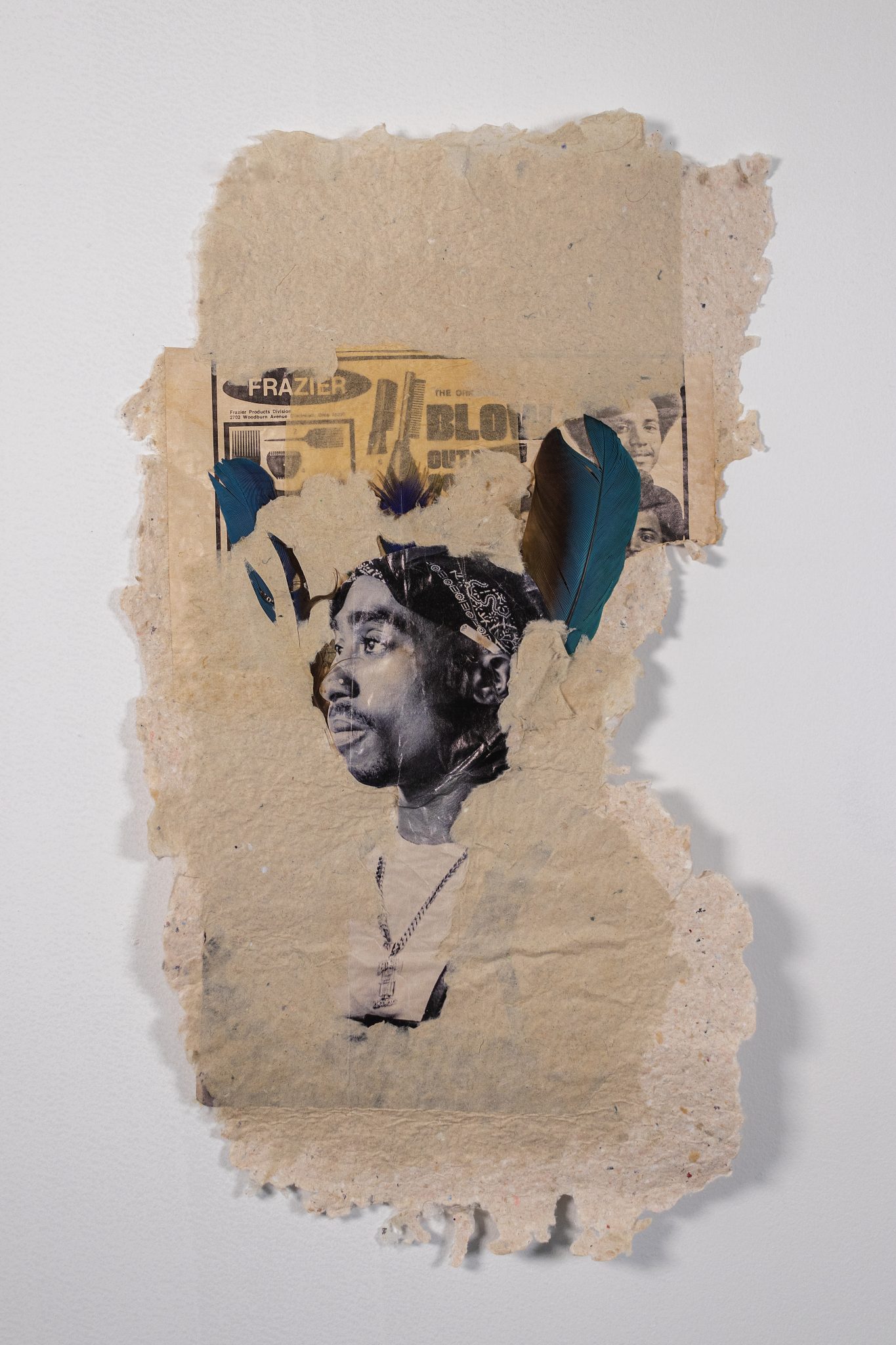 Let’s reconsider the word “solo” and, by extension, the exhibition’s title. These are knowing winks to the truths Franklin has long explored, the freedom to be yourself is determined by the system we live within—class, race, sex and gender all play a role in how you can move through the world. “Solo(s)” presents identity as a concept formed through, by and sometimes in spite of the cruelties of racial capitalism. In “Solo(s)” the self is made from interactions in the world, communities found and formed. The self then is never a set point, others can help you grow and you them. Thus it is fitting that the majority of Franklin’s work within the show was made through artistic partnerships. The exhibition opens on some of Franklin’s collages, created for friends’ and collaborators’ album and book covers. As a visual artist, Franklin is well known for her collage work, her technique and primary mode of inquiry featured within her artist books, “Under the Knife” (2018) and “Too Much Midnight” (2020). Collage itself is a method where disparate parts are taken by the artist’s hand and interpreted in order to make a new whole, a cohesion formed through discontinuity, every separation now a potential link.

The immersive installation “Library 0f Love 2014/2022” displays Franklin’s thinking on the possibilities of connection, community and the transformative power of intimacy in its many forms. In the first “Library” iteration, staged in 2014, the installation was an ode to Chicago during a time in popular discourse in which the city was positioned as a site of unchecked violence, a place to fear. The 2014 “Library” was itself a love letter to the city’s many communities that blossom in the face of structural disenfranchisement and material inequities, a truth echoed and amplified throughout “Solo(s).” For the 2022 iteration of “Library,” Franklin writes in the installation’s wall text, “as the pandemic rages on in its terrible adaptations, as America negotiates her love of firearms over the sanctity of human life, as legislators lean into the idea of women, femmes, and children as property… we are hungry for spaces to feel whole and loved.” Visitors can sit upon a love seat to listen to a mixtape Franklin created with other creatives on what love means to each of them, read a book on love for which Franklin created the cover art and write a love letter. While it is perhaps obvious to all that these three activities are not mutually exclusive, it is worth stating as this, too, is Franklin’s conception of love: it is never an exclusion. Love here is time, work, attention and presence. Love, in Franklin’s view, goes hand-in-hand with her conception of the self—it is a necessity for one to know others to know oneself. 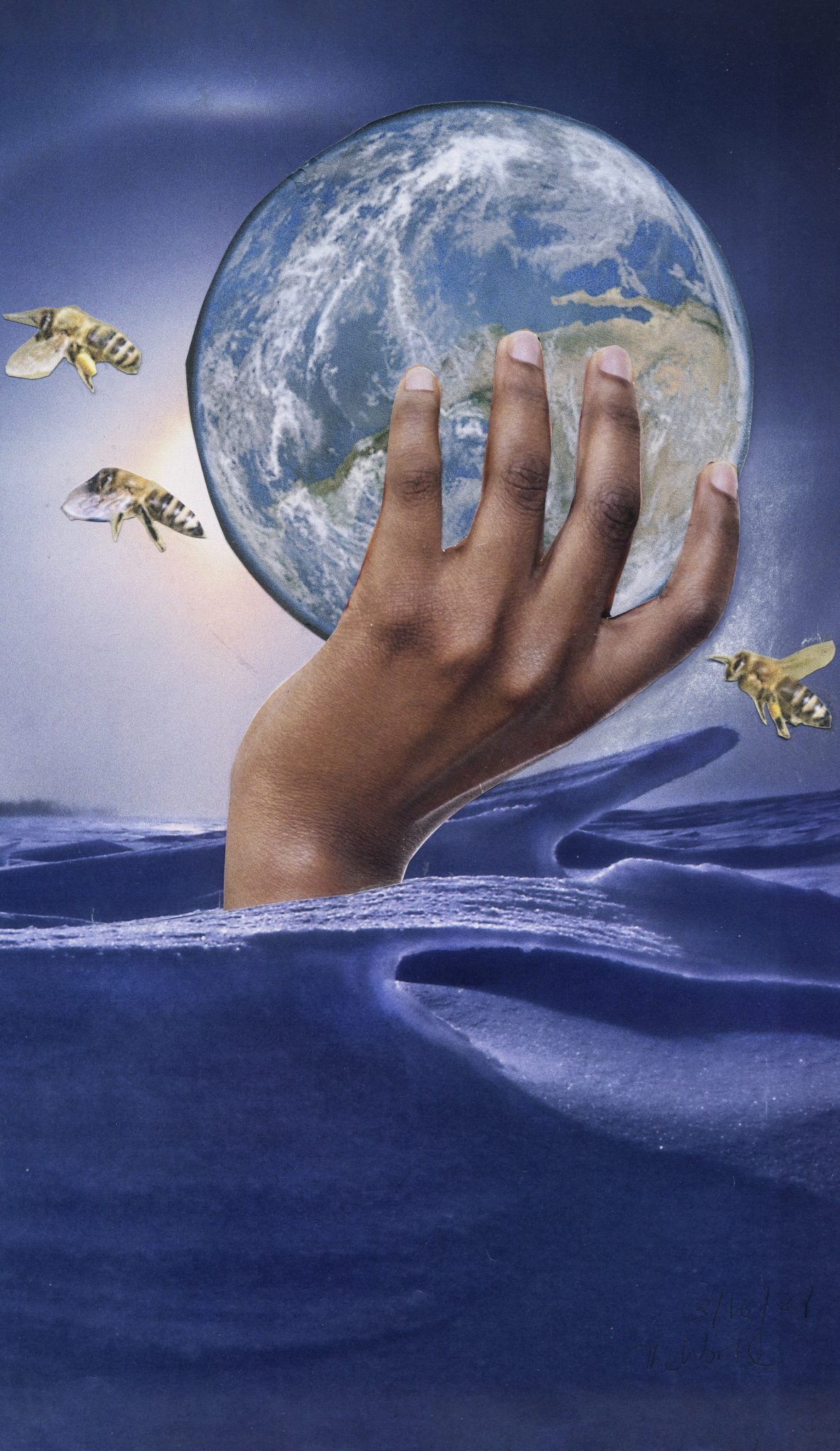 Then what does it mean to call Krista Franklin a multi-hyphenate artist, an Afrofuturist and Afrosurrealist? She has posed this same question back to interviewers. Usually the conversation turns to Franklin’s use of mysticism, metaphysics, astrology and tarot. She considers surreal ideas of horror, the dream state and speculative fiction as her preferred modes of inquiry to express what is often inexpressible for Black and brown people within intersecting systems of oppression. Though her work has superficially been compared to Sun Ra’s practice, Franklin herself has cited author Octavia E. Butler’s writings as a major influence on her own thinking.

In 2006 she made the artist book “SEED: (The Book of Eve),” a series of two-page collages that responded to Butler’s science fiction and in 2015 partnered with adrienne maree brown to contribute to the collection, “Octavia’s Brood: Science Fiction Stories from Social Justice Movements.” When considering Franklin’s work, the idea of justice is paramount, as it is not Butler’s references to mythology, space or dystopia that provide a throughline between these thinkers. Rather, Butler used these systems and ideas to imagine stranger, better worlds: worlds that reflect our fears, and our hopes, and never fail to surprise. Franklin too uses the speculative, sci-fi and the surreal to think through the vast possibilities, the horror, the grotesque, the beauty, of the collective and the individual.

“Solo(s)” features arcana from Franklin’s upcoming work with the Octavia E. Butler Tarot, the deck soon to be published through AK Press. Images of the tarot are collaged and interpreted through Franklin’s eye: The Empress, The Lovers… What does it mean to be faced with the Hierophant? The World? Know this, each piece contains the unknown, its meaning malleable, a desire unfixed. These are possibilities that belong to you and the person sitting next to you on the loveseat. This is the heart of “Solo(s):” transformation happens not in a vacuum, just as the unconscious, that unknown potential, is formed through the world. It is possible to find oneself through the eyes of another.