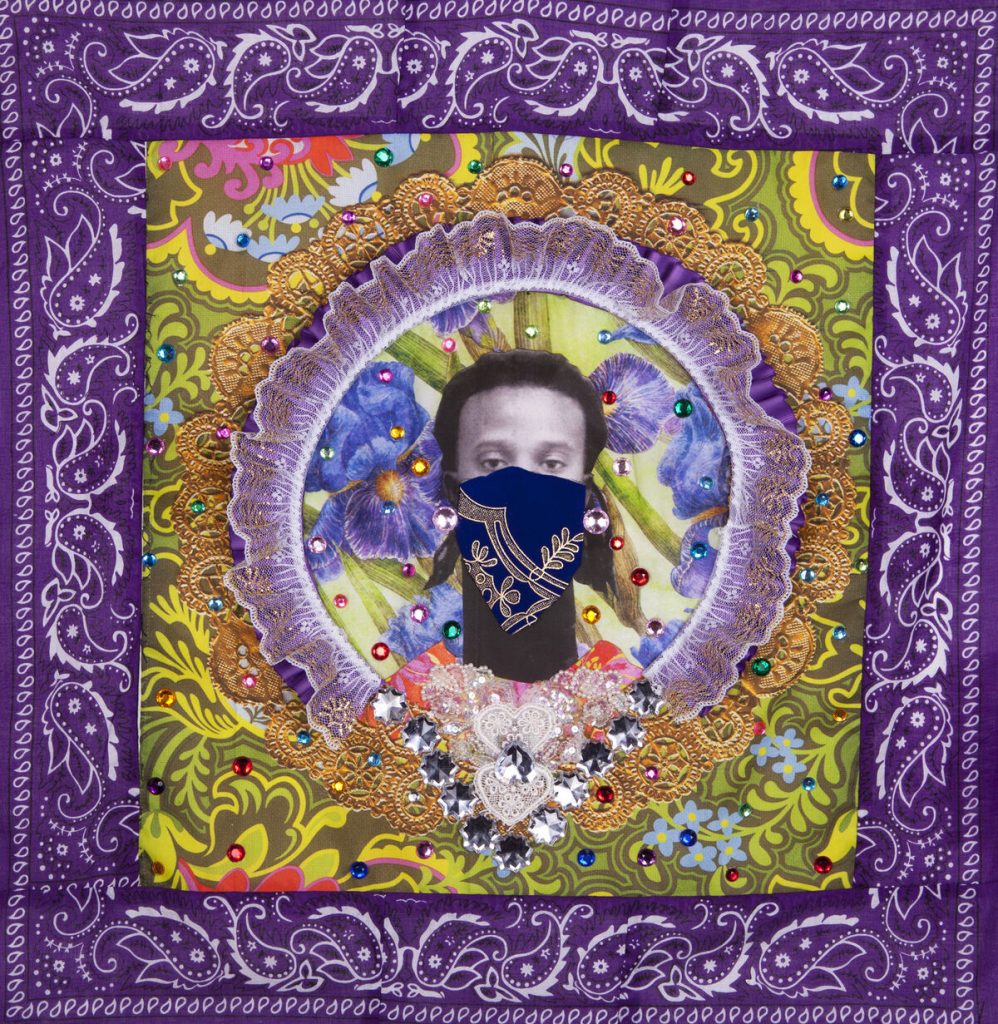 October is the perfect time for a quick trip to the other side of Lake Michigan, to catch fall in all its brilliant abundance. An exhibition at the Lubeznik Center for the Arts in Michigan City offers another enticement: a chance to view a cornucopia of the most exciting contemporary artists working today, presented in a fresh and revealing context.

“moniquemeloche presents” is both a tribute to and collaboration with Chicago-based Monique Meloche—whose eponymous and storied gallery is now entering its twenty-second year. In addition to spotlighting her curatorial eye, the show celebrates how Meloche, who is white, made a commitment to representing artists of color right from the start. Spread across two galleries are several works by eleven of the artists on her roster, including Sanford Biggers, Ebony G. Patterson, Sheree Hovsepian, Dan Gunn and Nate Young. Ranging across mediums (painting, photography, video, installation), much of the work was made over the past decade (Rashid Johnson’s 2009 “Green Belt” is the oldest piece in the show) and some of it is drawn from recent Chicago shows. Taken as a whole, the exhibition offers varying points of entry, whether to observe how an individual artist evolves over time or to consider how formal and thematic explorations ripple and deepen when seen across multiple works.

A particularly evocative encounter takes place in a corner of the main gallery, where a quiet call-and-response unfolds between two of Jake Troyli’s Pietà-like portraits of young Black men adorned in emblazoned athleisurewear (“Natural Habitat I and II,” 2019) and a pair of sumptuous paintings by Kajahl (“Terrestrial [blue helmet],” 2016 and “Green Face Mohawk,” 2017). In the foreground, “Aso Ebi: Turquoise and hint of Plum” (2021), a wood and fabric bust by Nigerian-born sculptor Layo Bright, acts as a sentry into this almost-cloistered space.

Exhibition director Lora Fosberg says the grouping was one of the “magical moments” that resulted from working with Meloche. Troyli and Kajahl both employ early Renaissance painting techniques to varying ends and, along with Bright, are investigating and reimagining a legacy of art-historical forms and codes to not only critique their erasure or marginalization of Black subjects but to put forth new ways of seeing, through precise stylization and historical recombination.

Bright’s use of a “Ghana Must Go” bag (the ubiquitous blue, red and white plaid plastic carryalls that have become a symbol of forced migration, as with Ghanaians made to flee Nigeria in the 1980s) puts her piece in kinship with a cluster of work on the second-floor gallery, where a focus on handmade and everyday objects, particularly as material for esthetic experimentation and social critique, is given full attention.

Through fabrication and inscription, Sanford Biggers, Karen Reimer and Ebony G. Patterson press quilts, bandanas, vintage fabric scraps and dollar-store flotsam into intricate patterns of information, from data graphs detailing climate effects to encoded messages from an imagined past and memorials for unknown victims of Jamaican gang violence resulting from American policy interventions. None of these visualizations necessarily offer a one-to-one correspondence with an existing reality but instead ask us to consider how meaning is made, why it becomes blocked or inaccessible and where it lays the ground for new forms of communication.

Fosberg and Lubeznik’s executive director Janet Bloch still seem amazed that Meloche agreed to a collaboration that has brought such rich work to their receptive community. While they insist the arrangement is a one-time thing, it does align with a larger strategy, to build and diversify their audience, by gaining access to artists of a caliber they have neither the budget nor the status to draw on their own. Crediting Fosberg for cultivating partnerships that are allowing them to be more relevant and “more a part of the art world,” Bloch asserts “We’re no longer ‘good for Michigan City,’ we’re good for anywhere.”