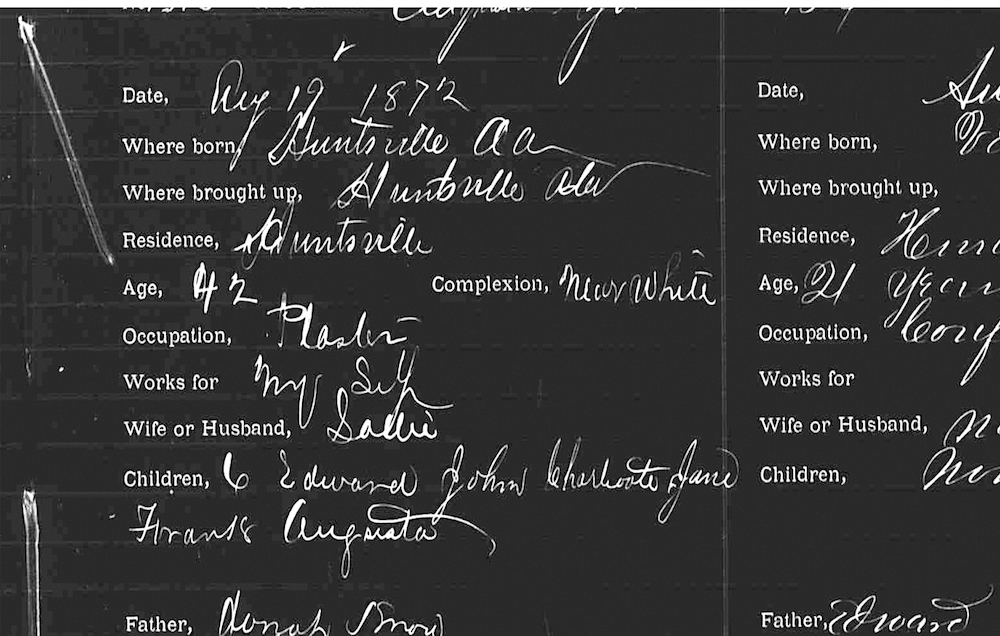 For artist Shonna Pryor, food is the conduit through which she explores memory, community and politics. Trained in painting at the School of the Art Institute of Chicago, where she teaches, Pryor’s focus on food, and the way it can represent ideas as disparate as financial health and wellness and family traditions and belonging, came about by happenstance.

“I was in grad school, and one semester unable to go home during Thanksgiving,” she says. “I just started making these paintings. One particular painting I remember is this giant sweet potato pie. And it was in my studio, and I just remember everybody who walked by just sort of paused and came in and we just had really rich conversations around food and family and it made me happy.”

The theme manifests in Pryor’s practice in a number of ways. One iteration, cleverly titled “Bread, Cheddar, Dough,” looks at financial health and legacy for African Americans, and includes the series “WallPAPER of Respect,” a gorgeous set of silkscreen-on-paper pieces featuring ledgers from the Freedman’s Bank. Begun in 2020, “WallPAPER of Respect” was on view in the recent “RELIC” show at Arts + Public Life, and will be included in Pryor’s 2023 solo exhibition at the Evanston Art Center. 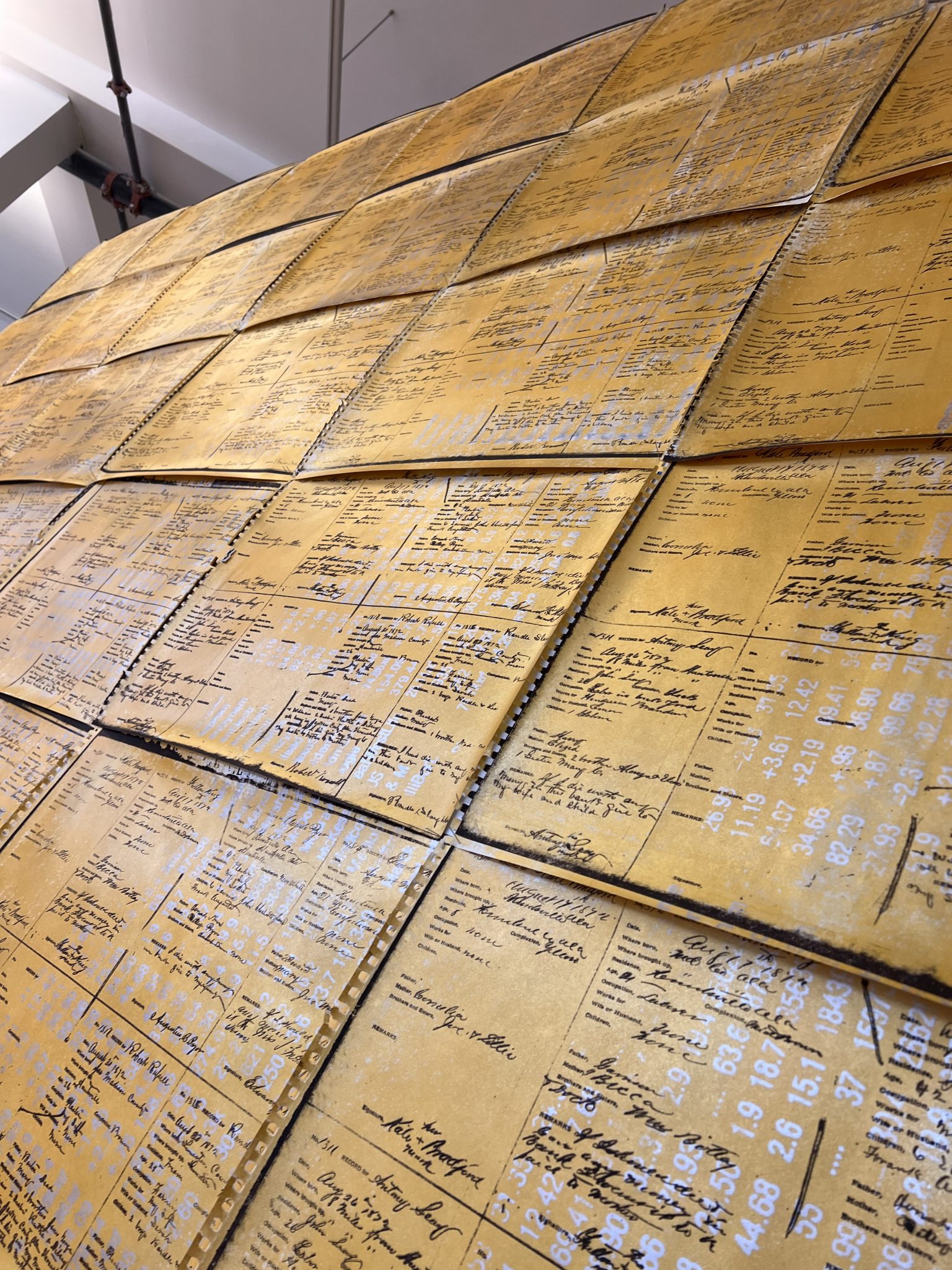 “Financial legacy and that whole theme factors into this idea nourishing those who are coming behind you,” Pryor says. “These are my ancestors that, despite the impossibilities of it, were still able to eke out a living and something that they can bequeath to their families.”

For the Evanston Art Center exhibition, “Of Portals and Pathways II: Fiscal Frontiers,” the artist hopes to print the ledgers on actual wallpaper. “It would be more immersive and you can get a sense of the expanse and the gravity of all of these people who were involved,” Pryor says. “And it’s a celebration. That’s why I call it the ‘WallPAPER of Respect,’ because these would have been the painted portraits of these individuals on that wall.” In the background of the ledgers, another layer of screenprint shows the stock pattern of different Fortune 500 companies. “Juxtaposing this in the opposite direction, pointing to the fact that this is the fabric of our financial success here, our financial power here in the United States,” Pryor says. “These are the people who built the foundational wealth of this country with free labor.”

The idea of nourishment is also on view in Pryor’s series “Care Package for An Afro Migration to Mars,” which are reclaimed items vacuum-sealed onto a foil-lined wood panel. The items depicted are Afrofuturist in theme, representing what essential items Pryor and her friends and family would choose to bring on a speculative migration to Mars.

Pryor got the idea after stories of tech billionaires seeking to colonize other planets. She reached out to a NASA food scientist to learn more about how astronauts are sustained in space. “The thing that kept coming back to me was this idea of preserving and sustaining the foodstuffs, they preserved it and sustained it through this vacuum seal,” she says. “That was one of the things that became this sort of focus: what’s worthy of preserving and sustaining my body, mind and spirit if I went on this speculative migration to Mars?” 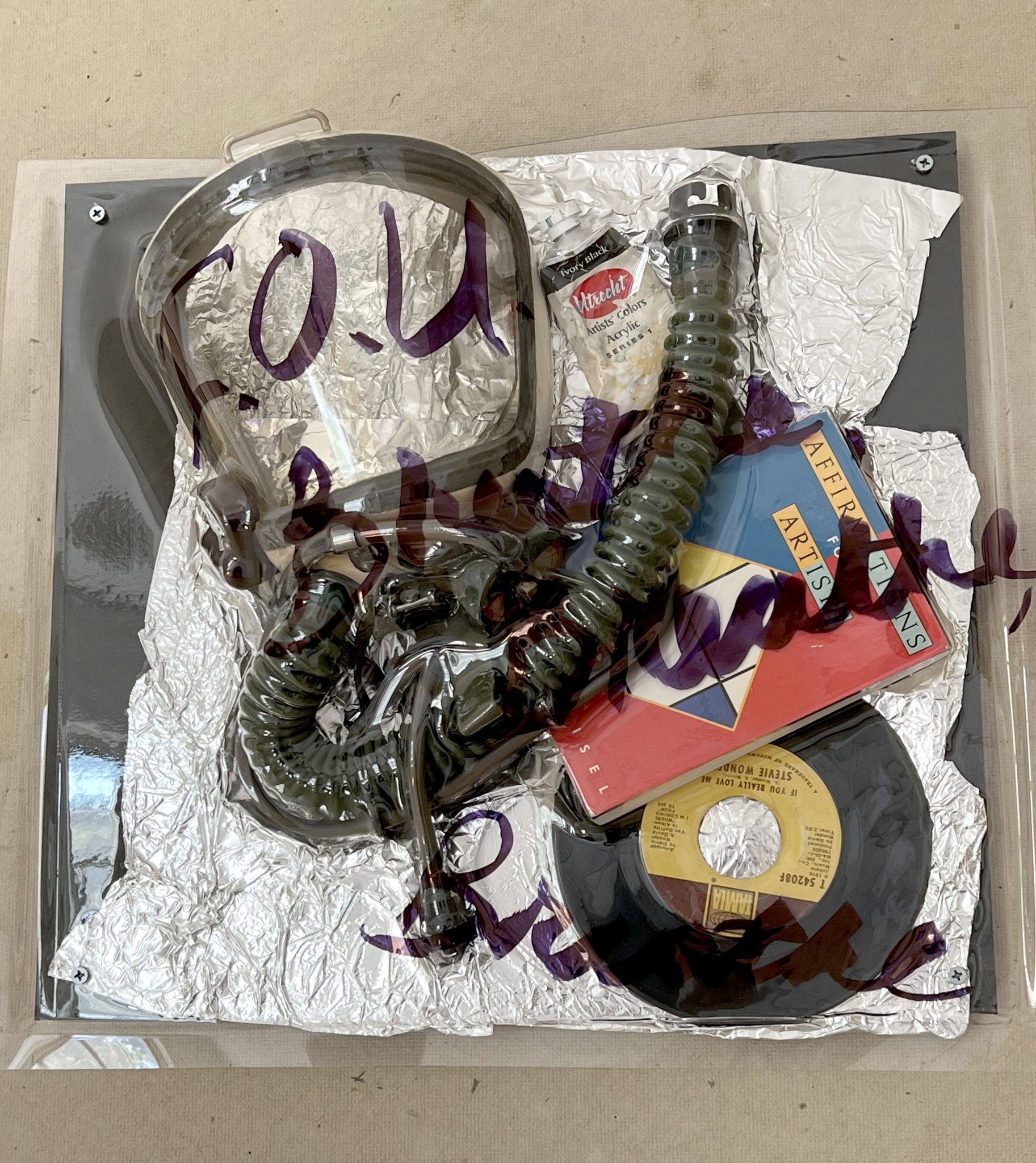 Shonna Pryor, “Care Package for an Afro Migration to Mars—Breathe”

One care package includes a deck of cards, a hair pick, a paint brush and a handheld radio; another has an astronaut’s breathing mask, a Stevie Wonder single, paint and the book, “Affirmations for Artists.” Pryor sources the items from eBay or secondhand stores, it’s important that they’ve had a previous life. The aluminum foil backing offers a futurist vibe, and also reminds the artist of Sunday dinners with her grandmother, who made sure everyone went home with leftovers.

Pryor recently had the realization that all her projects function as a sort of underground railroad, offering escape, or a portal, to freedom. She seeks to channel the past and the present into a speculative, more just future, where nourishment, whether financial stability or artistic fulfillment, is bountiful for all. (Kerry Cardoza)

You can see Shonna Pryor’s work in the group exhibition, “A woman with a baguette. Another one.(An object that was lost upon your entry into language is visible in its bruising.)” at Ruschwoman, 2100 South Marshall, Unit 105, through October 30.