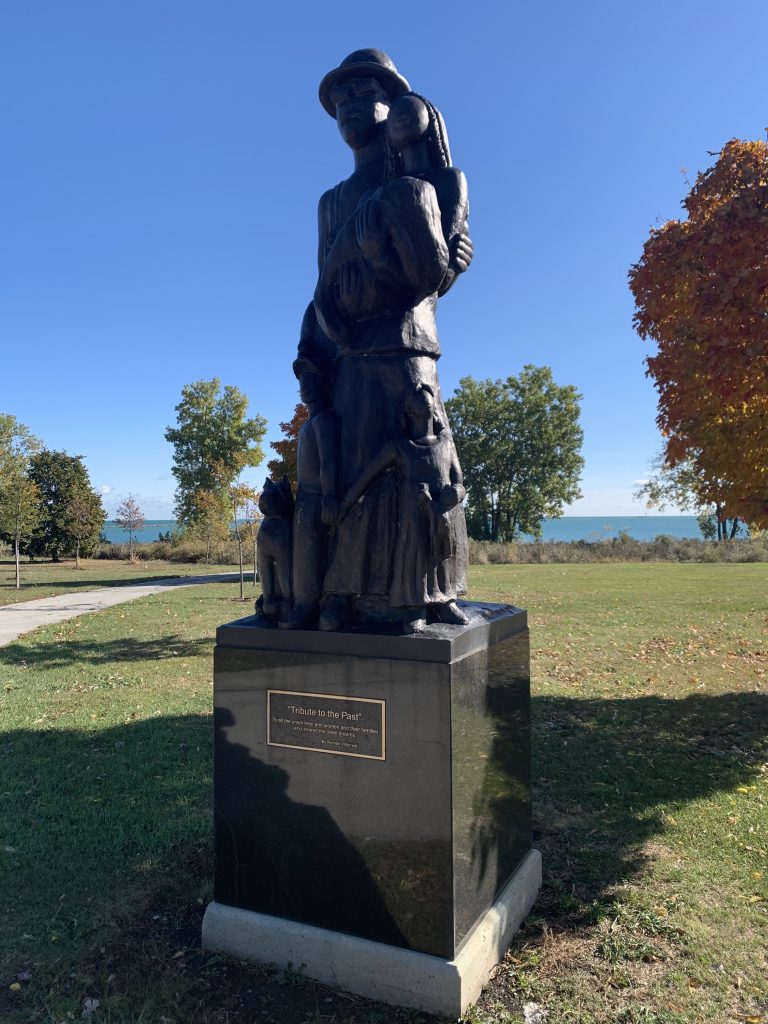 Roman Villarreal, “Tribute to the Past,” Steelworkers Park

At the entrance to Steelworkers Park where 87th meets Lake Michigan stands a fifteen-foot-tall statue by local artist Roman Villarreal. The statue features a union steelworker sporting overalls and a handlebar mustache, surrounded by a woman, three children and a dog. The plaque at its base reads: “Tribute to the Past.” The statue is one of many above-ground tributes to the history of the region’s steel industry.

A dozen people gathered at the foot of the statue on Saturday, October 14 to pay tribute to a past that rests beneath the ground: the unceded Potawatomi territory underfoot. The occasion was the preview of a new audio piece, “Shore Land,” created by JeeYeun Lee. “Calumet” is one of six audio tracks that Lee is working on with collaborators and an audio engineer. Each track corresponds with a different section of shoreline between Evanston and Indiana. The series as a whole is part of the Roman Susan Art Foundation’s “Navigations” series.

The genesis of the piece can be traced to a 1914 lawsuit that the Pokagon Band of Potawatomi filed against the City of Chicago. When the Pokagon were forced out of the Chicago area in 1833, they signed the Treaty of Chicago, which ceded their land to the shore of Lake Michigan. The City of Chicago filled in that shoreline with construction rubble, sand and debris from the Chicago Fire, extending its city limits out into the lake. In short, the land that we now know as the Chicago lakefront was, less than 200 years ago, lake.  In 1914 the Pokagon Band of Potawatomi sued the City of Chicago for its land, which by then included features like Grant Park and the Art Institute of Chicago. The Pokagon lost the case at the Supreme Court, which ruled they had the right to occupy the land but had failed to do so. 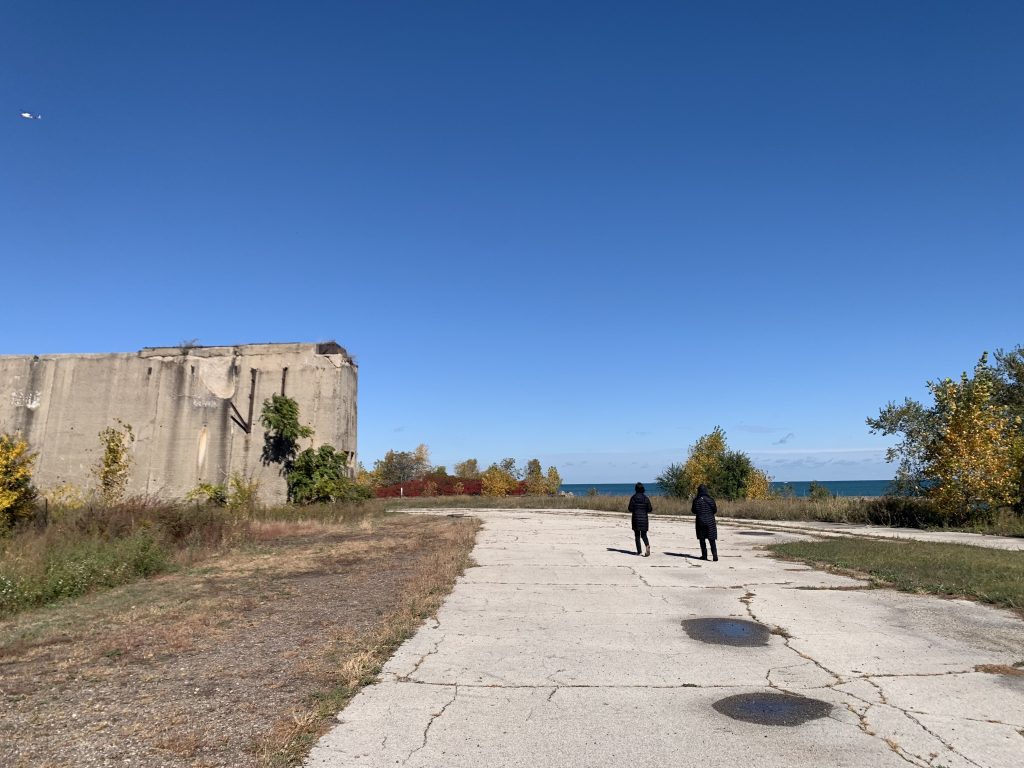 Last fall, after Lee read about the court case in a book by John N. Low, she developed the “Whose Lakefront” project, a procession through downtown Chicago that left a line of red sand on the sidewalks, marking the unceded land. “Shore Land” is an expansion on “Whose Lakefront,” as the two projects share content and collaborators.

Lee is quiet and bold. Her answers are succinct and thoughtful. She has a habit of distributing credit, and I always leave our conversations with a list of other people that I should talk to. But Lee is also magnetic in her ability to gather people and rally them.

Billie Warren, an educator and artist of the Pokagon Band of Potawatomi, introduces the audio piece at Steelworkers Park. Warren, chatty and bright, is wearing a pink Patagonia puffy jacket and rhinestone sneakers. “I want to know who’s here—I’m Billie,” she says warmly, as people gather. “When I first heard about JeeYeun, I was like who is this lady? What does she want to do with the Potawatomi?” Warren says. Warren decided to stay open and the two exchanged words. Lee explained her project and her own background as a Korean immigrant. Warren was convinced by Lee’s knowledge and commitment. “And her spirit,” Warren says, the light in her eyes flickering, her warmth toward Lee cutting through the biting wind.

Before the cold can creep in too deeply, a QR code is handed out to the group and everyone scans it and puts headphones on. For the next twenty-five minutes, a multidirectional meander takes over the park. I head to the north, toward the abandoned ore walls, and make my way clockwise while the twenty-five-minute piece plays, perfectly timed to a slow lap around the perimeter.

The piece begins with the sound of water and flits between treaty readings, legislation, interviews, anecdotes, nature sounds and songs. At some points the sounds overlap, words over music or even words over words. Some of the layering is calming, like swishing of water behind an anecdote about childhood. Others are layered for intensity, like the overlapping legislation readings from 1909. 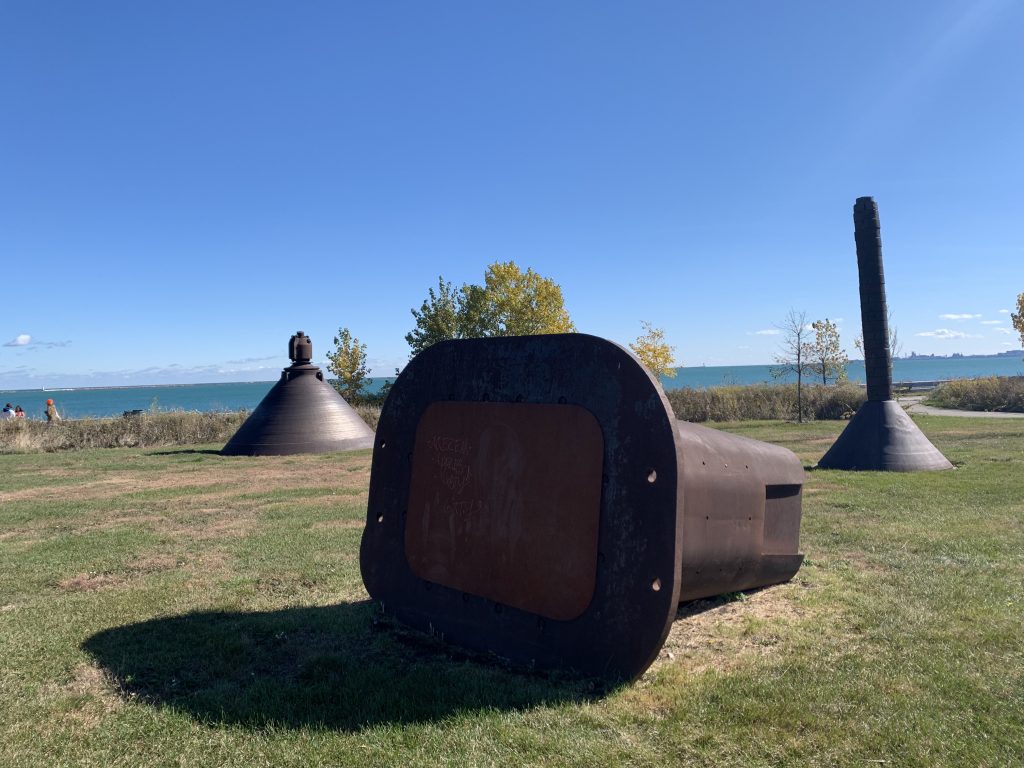 Heather Miller of the Wyandotte Nation, whose voice is featured in the audio piece, describes her experience of reading the treaties in the sound room. “I’ve read tons of treaties,” she says. “But reading them back-to-back in that space, seeing the total devastation that these documents induced, that was impactful.” Hearing the finished project changed things for her. “Seeing how [Lee] used those words to illustrate this particular piece, it makes it come to life better. I appreciate the way that people can conceptualize [this project] as they move around, as it relates to them right now, in this space.”

The stories don’t appear chronologically and therefore can’t be told as a single narrative. They are instead the auditory intersection of many pasts which went unacknowledged in the creation of Steelworkers Park, and of the Chicago shoreline as a whole.

Don’t get me wrong, I love parks. I think that public access to green space is necessary for mental health and a perceived high quality of life, especially within a city. I don’t think that Lee’s project is a demand to strip the green spaces along the shoreline from the public and deny access to anyone who is not of Potawatomi descent. The piece is more successful as a question: What does entitlement to land really mean? When the City government declares a land “public space” which was neither theirs to declare nor private in the first place, what history is deliberately obscured to make that designation? Who did they have to willfully forget in order to create, and then offer, this public good?

Back at the entrance to the park, Lee takes the time to hear thoughts and questions about the piece. The sun has risen higher and is casting a strong downward shadow on the steelworker and his family. The worker’s presence is an important tribute to a past, but not the past. The past contains multitudes of stories. Stories that begin long before the steelworker and his family moved to the area. The multitudes remain, at least for now, deep in the ground. But Lee and her generous collaborators are trying to bring them to the surface.

“Shore Land” is a work-in-progress by artist JeeYeun Lee. Check the artist’s website for updates and previews. It is part of the Roman Susan Art Foundation’s “Navigations” series.