Martine Syms, “A Pilot for a Show about Nowhere” (still), 2015, two-channel video (color, sound), twenty-five minutes/Courtesy of the artist and Bridget Donahue, NYC

When it comes to talking about one’s work, Los Angeles-based artist Martine Syms, a self-dubbed “conceptual entrepreneur,” is not afraid of making sure that her voice gets heard. For her solo exhibition, “She Mad Season One,” at the Museum of Contemporary Art Chicago, she introduces the exhibition in a video interview displayed at the entrance. Throughout the exhibition, the color purple—a reference to Alice Walker’s 1982 novel—recurs as a unifying element: a series of purple-painted aluminum wall studs form an immersive accordion divider, zigzagging across the museum’s second-floor gallery. Shuttling back-and-forth through these bare-bones walls, the audience watches five of Syms’ video works, spanning from 2015 to 2021, which make up a conceptual sitcom series that features the artist herself as the main cast member.

There is a long, running list of contemporary artists who actively insert themselves into their works: Amalia Ulman, Miranda July, Nikki S. Lee, just to name a few. But rather than conjuring a distinct persona separate from the self, Syms renders “She Mad Season One” a lot more personal. “I like the idea of trying to make myself into this kind of caricature. What are the things so specific about me that they become relatable to anyone?,” the artist says candidly in the introduction video. She is known for a body of work that concentrates on the representations of Black experience in popular media through a critical perspective that also examines the technologies which mediate them. For this exhibition, Syms uses herself as a subject to examine how mass media and social networks can start a feedback loop that fictionalizes reality and realizes fiction. 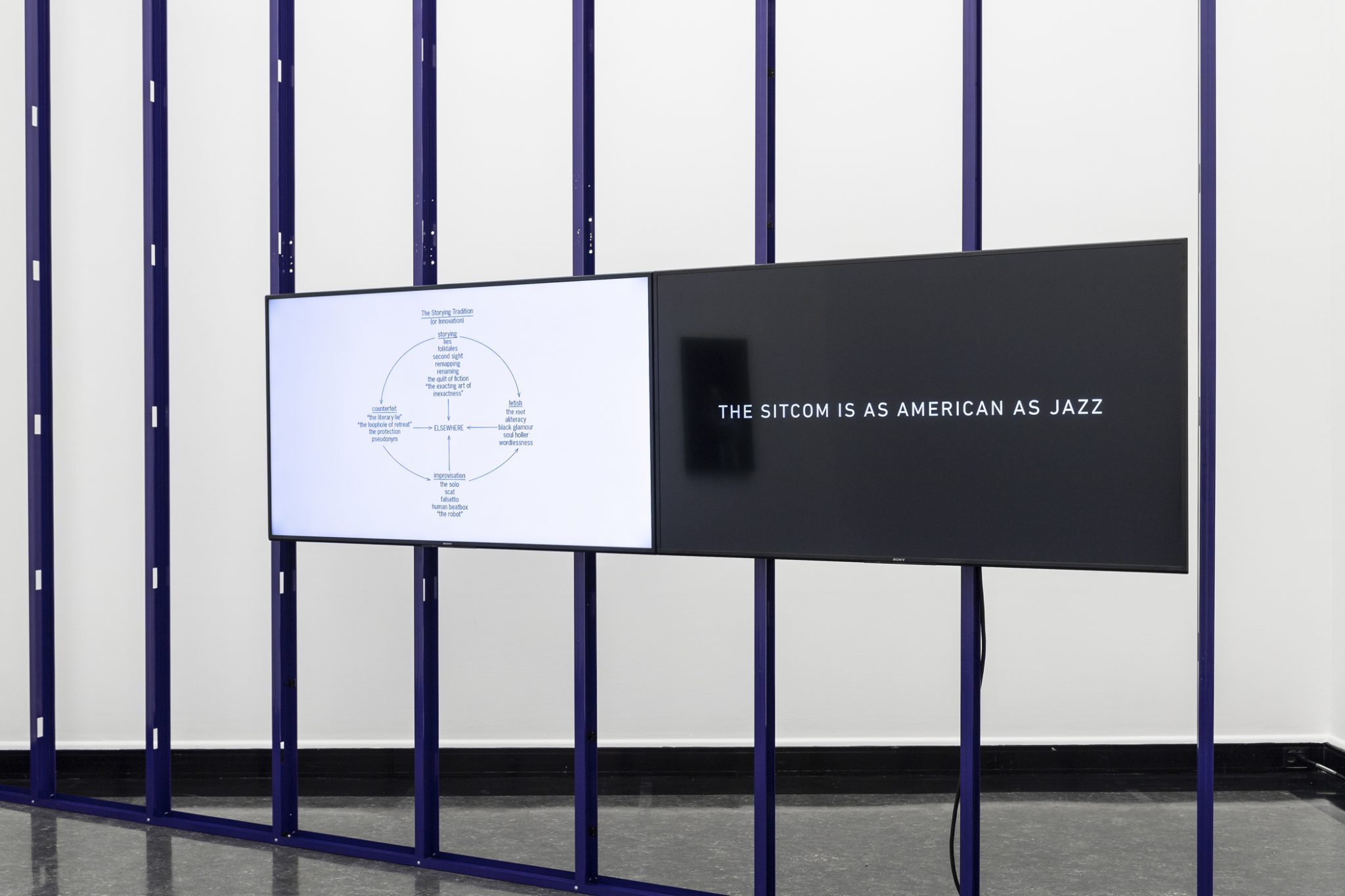 We can read this exhibition as a multimedia autofiction in which the artist serves both as the author (Syms) and the protagonist (Martine). Autofiction as a literary form is exemplified by authors such as Sheila Heti, Chris Kraus, Ocean Vuong and Ben Lerner. In autofiction, as literary critic Christian Lorentzen defined it in 2018 on the Vulture website, “There tends to be emphasis on the narrator’s or protagonist’s or authorial alter ego’s status as a writer or artist and that the book’s creation is inscribed in the book itself.”

This is a fairly accurate account for “A Pilot for a Show About Nowhere” (2015), the earliest episode of the series. The twenty-five-minute video essay, which surveys the history of the sitcom and its systemic tendency to distort or misrepresent Black experience, is narrated by Syms and is also itself a proposal to her sitcom, “She Mad.” “She Mad” follows graphic designer Martine who tries to make a living in Los Angeles’ creative industry. Loosely following this conceptual setup, the remaining four videos are anecdotal episodes–ecstatic, humorous and satirical–that discuss socioeconomic, racial and psychological conditions for a young artist while parodying popular media such as reality TV shows and TikTok. 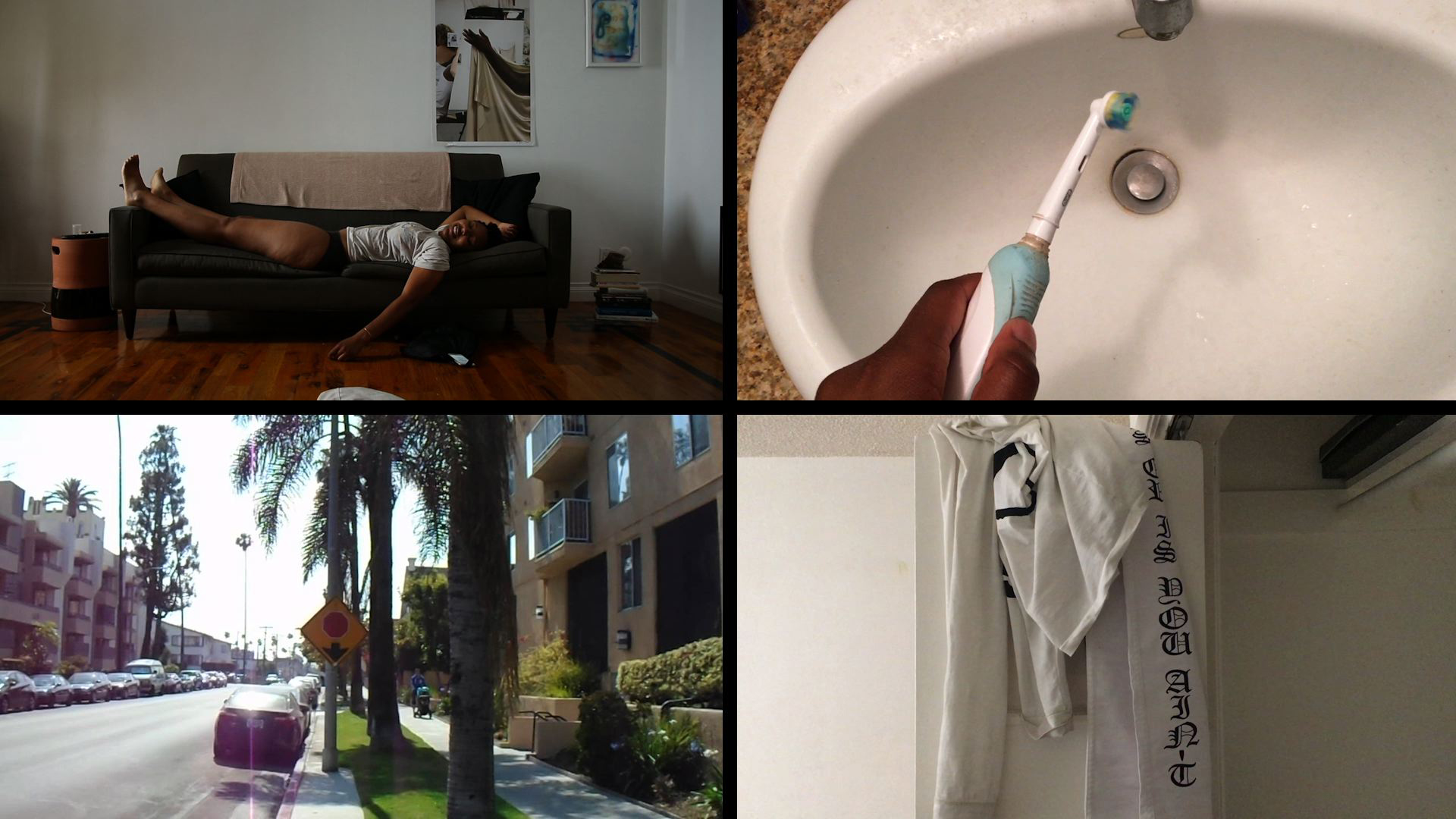 What’s exceptional is Syms’ dexterous use of cinematography to develop make-believe narratives for Martine. “Laughing Gas” (2016), stands out as a four-channel video that recounts the protagonist’s visit to the dentist. Under the effect of nitrous oxide, Martine wakes up from the surgery, laughing away that the insurance company has denied her coverage and that the doctor sends patronizing microaggressions her way: “You want to maybe give dad a call?” Four flat-screen monitors unite in a two-by-two grid, showing the same scene unfold from multiple angles—including a first-person view from Martine’s perspective, or juxtaposing it with snippets of delirious laughing culled from films, TV shows and internet memes, paraphrasing the protagonist’s psyche. Syms takes advantage of such video composition to construct a narrative artifice that simultaneously presents a subjective and objective view of the protagonist. It has restored a reality that is Martine-obsessed, and this reality seems as Martine-real as the U.S. healthcare system is costly.

“The Non-Hero,” 2021, a vertical video addressing the aspect ratio of a smartphone, is a salient example of how autofiction proliferates on social media. American-Canadian writer Zach Pearl theorizes the concept of “ghost writing the self” to describe networked media as spaces for autofiction writing, indicating that platforms such as Instagram and Twitter “conflate the notion of self-narration with documentation” through features and limits that each provides and imposes. Modeled after rapper Lil Nas X’s four-part viral TikTok videos “Life Story” of the same year, “The Non-Hero,” using the same TikTok feature that the original videos had (video collage, overlay texts; Syms even used the same moody track, “Decks Dark” by Radiohead as background music), confesses a similar bumpy journey from rising to stardom to struggling with depression—though this time, the subject is Martine. 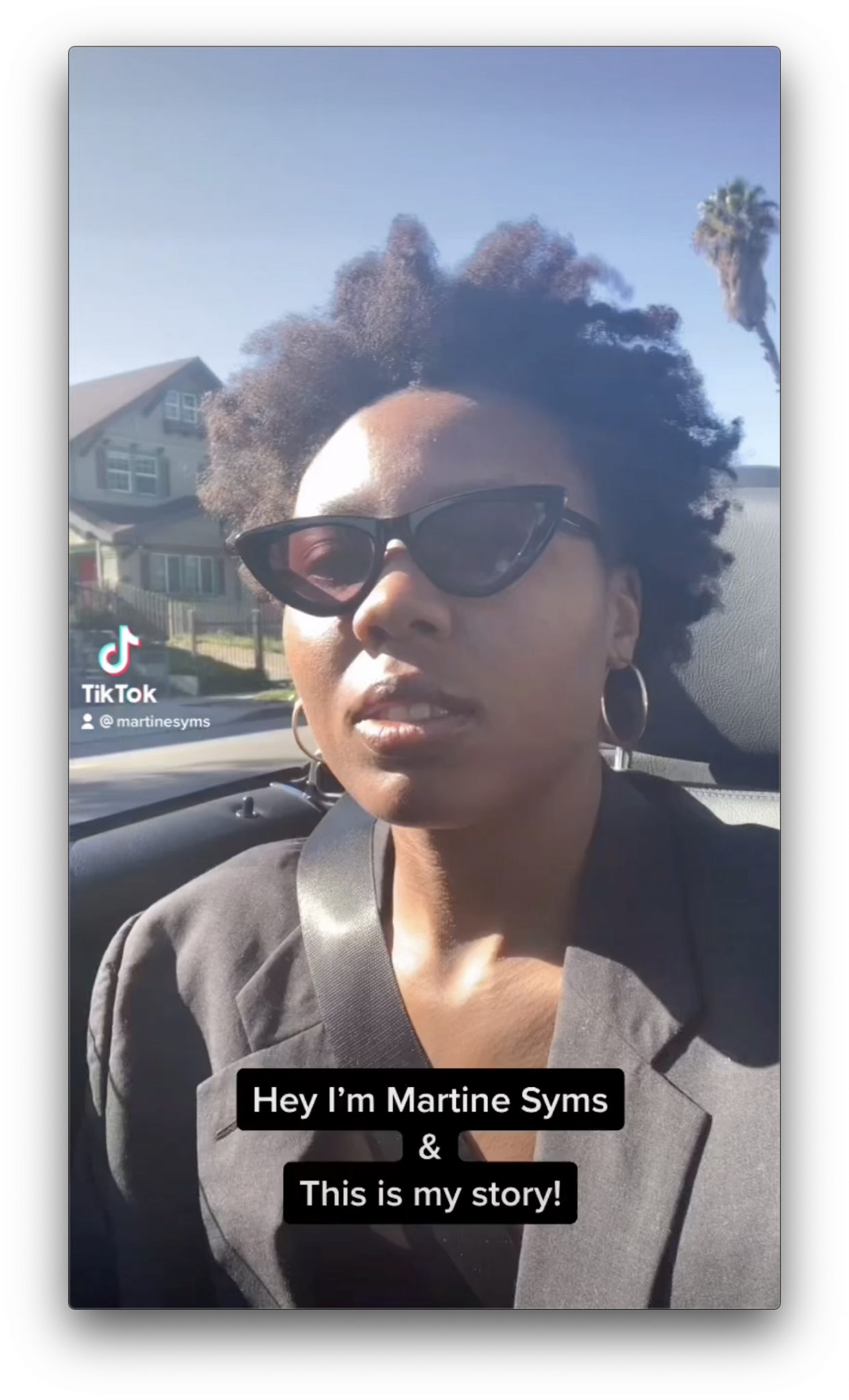 “Intro to Threat Modeling” (2017), of which the title alludes to a cybersecurity procedure that evaluates vulnerabilities in digital networks, echoes with similar psychological volatility. Applying threat modeling on herself, Martine vomits out her frustration and distrust, declaring that art is not her home and trying to set up a defense system to protect her image, her privacy, her mental state, against a capitalist art world that attempts to profit from her.

Apart from the five videos, the show exhibits quieter elements that play an equally crucial role to substantiate the life of Martine. Similar to Syms’ previous show, “Incense Sweaters & Ice,” at the Graham Foundation in 2018, the videos are in sync and play one at a time. Instead of the monochromatic purple that fills the screen when a video is not playing, which was the case at the Graham, Syms chooses to show slides of personal photos as though they were uploaded in bulk directly from camera to the computer—like how early users used to create Facebook albums. Are these photos genuinely Syms’, or by Syms for Martine? We aren’t quite sure. Some connect to the artist’s previous feature, for example, photos taken on set of jazz singer Fay Victor as Mrs. Queen Esther Bernetta White against the familiar purple background. Others are confoundingly banal: an empty Monster Energy drink can sitting on a car, two or three shots of the same fluorescent light tube popped against the wall, out-of-focus still-lifes and vitrines, a bong and a jar of weed, portraits of Martine/Syms, depicted sitting on a café patio or laying in bed. 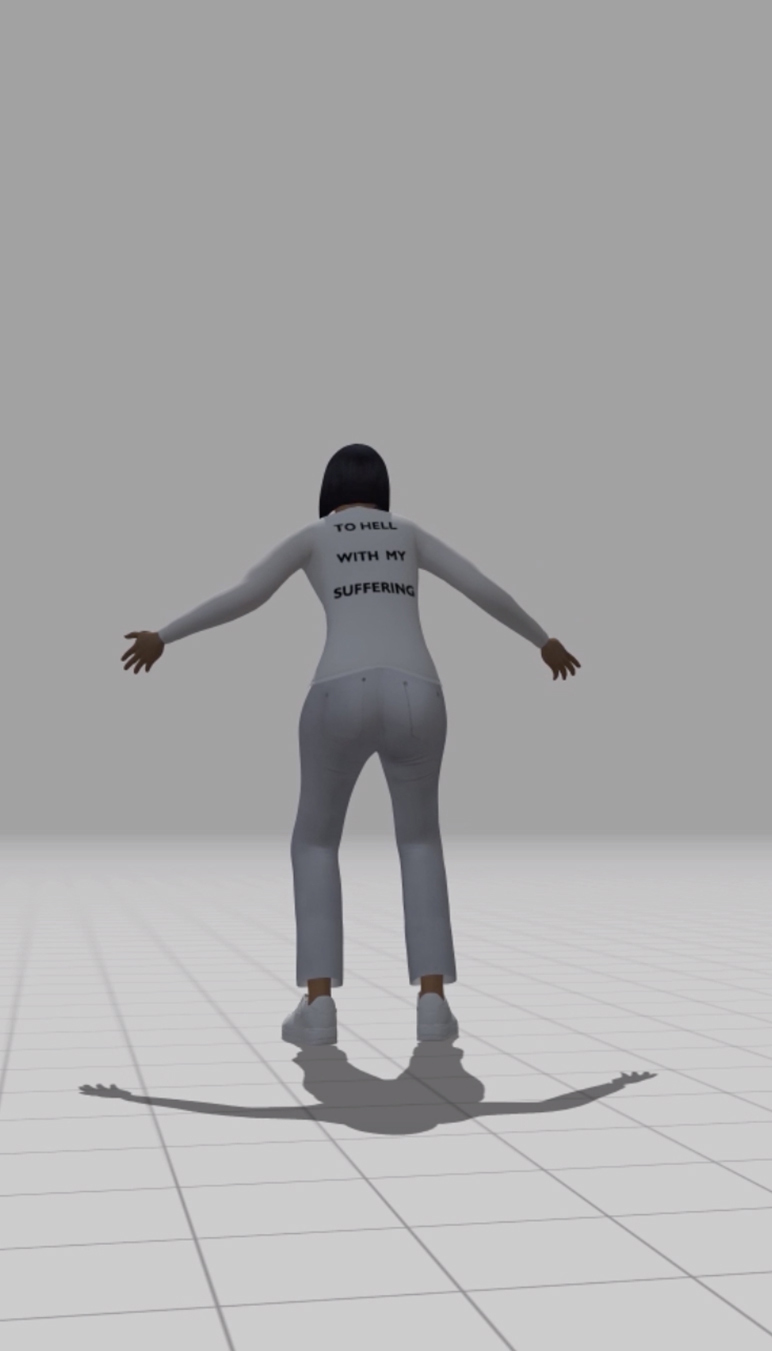 What unites these photos are their grainy film quality, and a time stamp in the corner that apparently gives out a wrong date (most of the photos are dated 2002). Presenting these analog-looking photos of mundane—sometimes redundant—subjects on a digital screen mystifies the identities between the protagonist and its IRL double. Their banality makes them deeply autobiographical; their intentional sloppiness alludes to fabrication. Martine/Syms is at the verge of bifurcating and reconvening; she has become the image that through exposure she can protect, deflecting our voyeuristic gaze, snatching our inquisitive eavesdropping. After all, this exhibition is about herself—and for herself, as she yells “To hell with my sufferings!” (Nicky Ni)