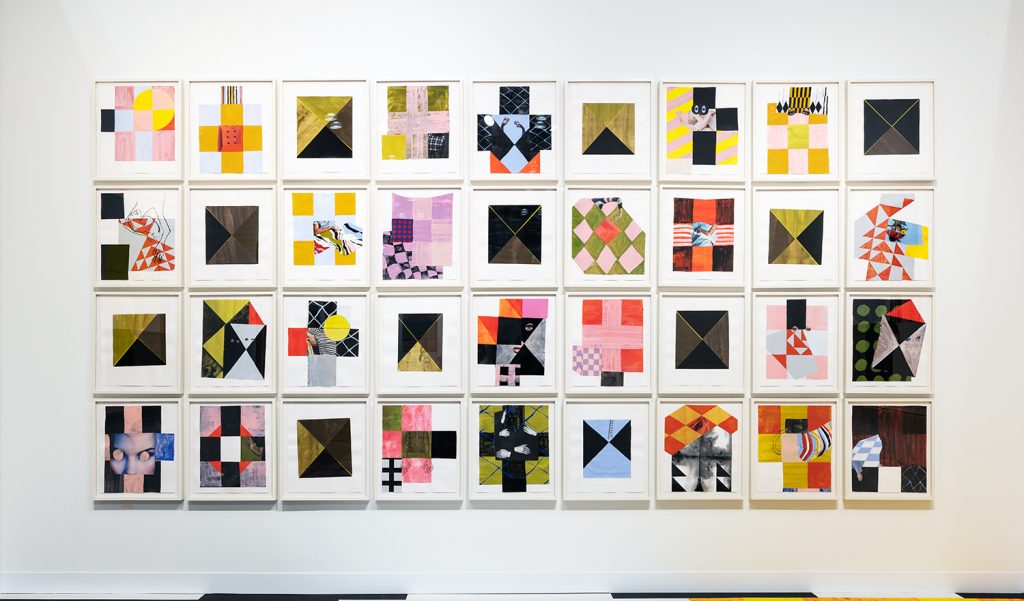 Carrie Secrist Gallery has spent the better part of the past two-and-a-half years in a state of flux. Forced to abandon their West Washington home of nearly twenty years at the outset of the pandemic, the venerable Chicago institution shuttered its doors in May 2020. Quickly relocating across the street, the gallery sprung back to life in the stately, but not especially accessible environs of a luxury condo. Provisional though it was, it worked as an exhibition space. And in an era where galleries transact most of their business online, and buyers collect works sight unseen, I guess it didn’t matter too much anyway.

Thirty or so months later, this November witnesses the gallery again opening its doors on its newest temporary space. Nestled in the former Catherine Edelman gallery on West Chicago, Secrist and company have put together a  presentation featuring the works of established artists on their roster as well as friends and affiliates. These group exhibitions in miniature will carry the space through until next spring when the gallery makes the transition to its future, permanent home a few blocks away. 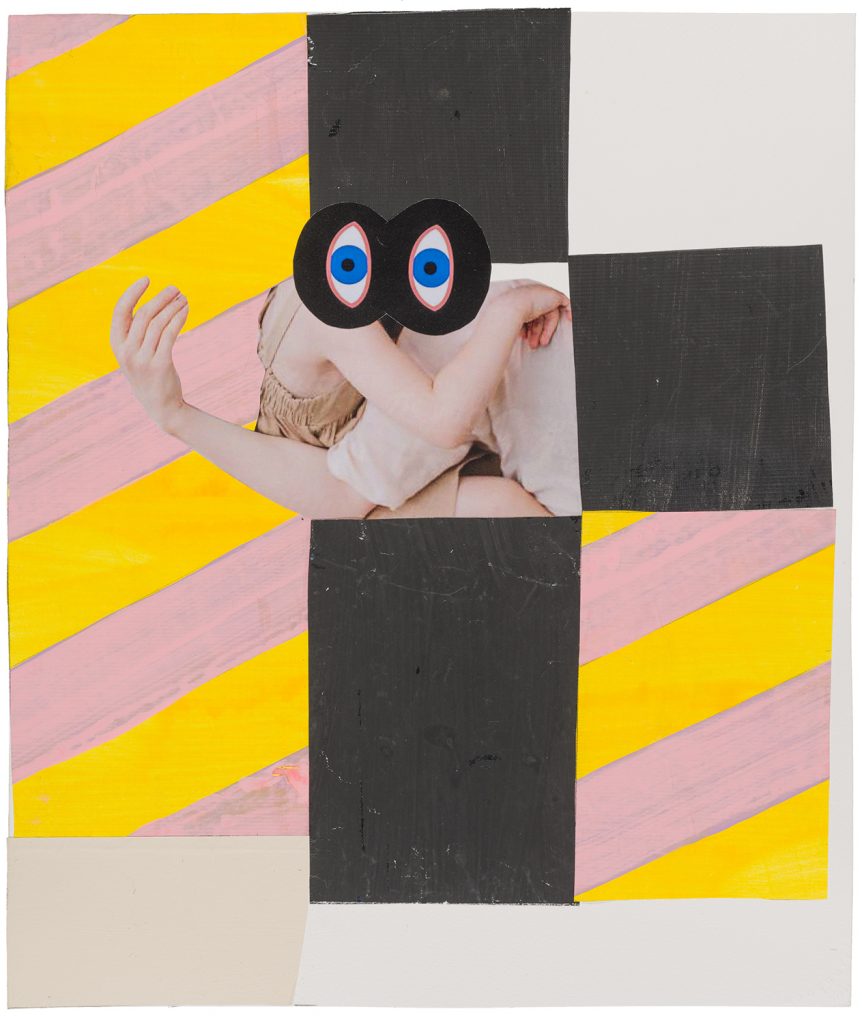 In art, as in life, one regularly ends where one begins. And so it is that Secrist’s inaugural show should feature some of the latest works by Diana Guerrero-Maciá, the Chicago-based artist whose “The Devil’s Daughter is Getting Married” closed out the gallery’s run back in 2020. Paired with a selection of found object sculptures by Oli Watt, the total effect of “BTWXT #1” (as the first of these presentations has been dubbed) runs the gamut of touch, material, color and expressive range. Funny but not frivolous, serious but not severe.

Guerrero-Maciá’s collages and larger assembled “paintings” continue to explore the artist’s interest, pattern and material and the socioeconomic relationships embedded within. Her newest works are based upon the “nine patch,” a “fundamental crop block pattern that organizes space in quilt making originating in the beginning of the nineteenth century”—or so the press release assures me. Hued with earthy greens, saccharine pinks, and clement yellows, the thirty-six collages in her immersive “Sleeping Giant” series feel thoroughly modern, but without the ridged geometry one might associate with their midcentury antecedents. 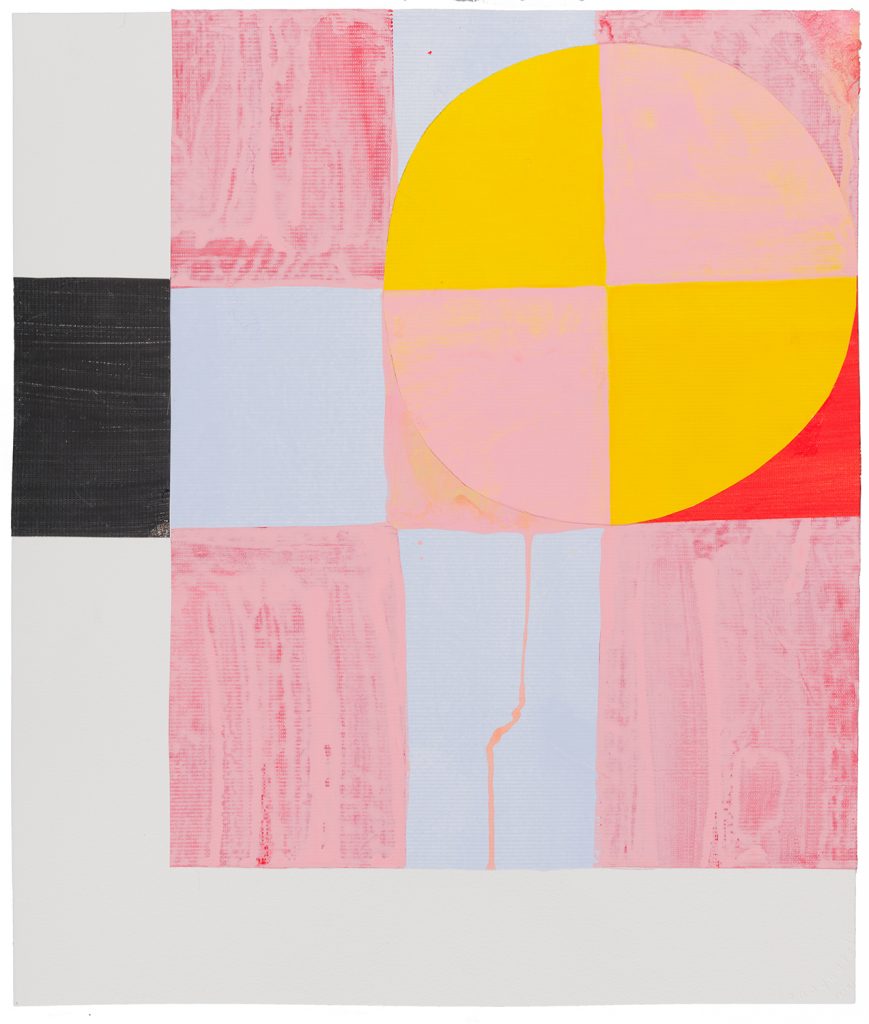 They’re arranged hierarchically, with the upper tier works allegedly referencing a more “enlightened spatial experience” while the bottom row points to darker id-like manifestations. Beautiful, but hard to see. The differences in color and content among the many pictures are not so significant that the artist’s intention is immediately apparent. And though most feature images or drawings of figures in bed or at rest and the formal structure is based upon quilting, the title of the series seems to reference the famous (and historically inaccurate) quote by Japanese Admiral Isoroku Yamamoto who, at the end of the film “Tora! Tora! Tora!” claims that the result of the Pearl Harbor attack has been to “awaken a sleeping giant and fill him with a terrible resolve.” The “Sleeping Giant” of course, is us.

I suppose by virtue of being made in 2022, these works contain a political dimension that may be obliquely connected to the series title. If the “giant” is full-on, conspiratorial, fact-denying crazy, that gobbles up resources while destroying its capacity to live safely and harmoniously in its only home, then it is most assuredly wide awake. Or maybe I’m reading too much into it. We too are “between spaces” and on these days after the election, the security blanket of art might be a good place to ride out the storm. (Alan Pocaro)