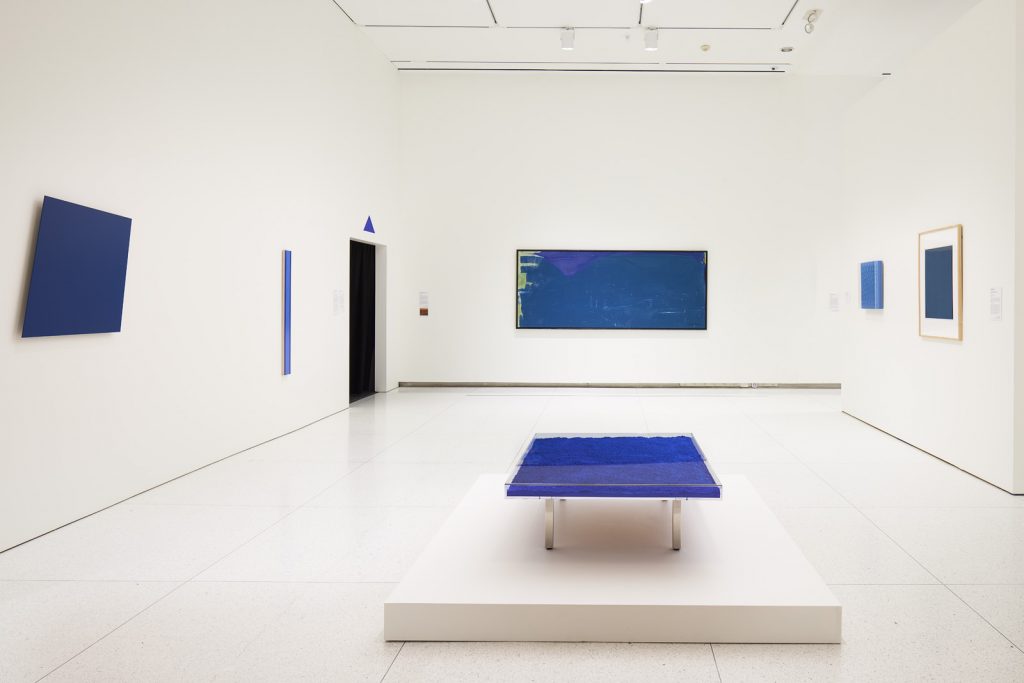 “Monochrome Multitudes” at the Smart Museum reimagines the ways and methods in which color and monochrome can be translated to the public. Red can be seen as rage, blue can be gendered and all color can be heard. The exhibition groups 120 works various sections and alcoves around similar themes. One grouping is self-reflective, another about monochrome sound, another looks at urban spaces, and one focuses on the body. While the themes are the same, the works range in material, color, context or history. Weavings, sculpture, painting and video are among the mediums used by the global artists in the show.

The exhibition, large with a labyrinth of artwork, is also dense with text describing each work. Labels are written by faculty members—not just art historians but a mathematician, an astrophysicist, a legal historian, students and interns—at the University of Chicago.

This, in part, is because the exhibition is a part of an ongoing series at the Smart called “Expanding Narratives,” where pieces from the collections are reevaluated in new curatorial strategies. The exhibition space is also the sole classroom for the Art History seminar course with the same name which was co-taught in autumn by the curators of the exhibition.

Reviewing 120 works is no easy feat, but the museum’s ability to display the works thematically gives some type of order and ease when walking from one space to the next.

In an interview with WTTW News, Christine Mehring, a University of Chicago art professor and curator of the exhibition said abstract art, or “art made from one color,” is the most challenging art you could encounter. “It’s the type of art that many people will say, including my students, either ‘I can do this’ or ‘Why is this art?’”

From Anne Truitt’s standalone three-dimensional painting (at human size) “Sun Flower” (1971-1984) to Derek Jarman’s monochrome 35mm film “Blue”  (1993), the show dives into how art can exist beyond color, yet be entirely focused on monochrome. It’s difficult to singlehandedly appoint a reason for each work as many of them exist in multitudes—as text, as a performance, a film, or a painting—and their exterior shouldn’t be deceiving (or thought of as “easy”).

And while many of the works are abstracted, the exhibition also gathers figurative themes within monochrome and how color can be associated with the inside and the outside of the body. Byron Kim’s “Synecdoche” series (1992) is four small painted “portraits” of his sitter’s isolated skin tone. Displayed alongside Kim’s work is Wolf Vostell’s “Manschetten” (1972), which are concrete cuffs that were used in a ten-hour exhibition where participants entered a cramped train car with animal brains and were forced to listen to their own EEG (electrical brain activity) and audio of heartbeats, all while wearing concrete handcuffs on their wrists and ankles. These associations with the body remind us that color is a signal for emotion, gender stereotypes and other forms of representation.

Ellsworth Kelly, whose artistic career focused on color field and minimalism, wondered about the public view of monochrome, too. He said in 1996, “‘Can I make a painting with just… color?’ I loved it, but I didn’t think the world would. They’d think, ‘It’s not enough.'”

But the Smart confronts those questions head-on. They acknowledge that artists have been discussing what art is, and what it isn’t, for centuries. “Monochrome Multitudes” isn’t necessarily trying to prove to the viewer that any of the artwork on display is art. It’s a view of the complicated and rich history of monochrome and the multiple mediums it can live through.  (S. Nicole Lane)

“Monochrome Multitudes” at the Smart Museum of Art, The University of Chicago, 5550 South Greenwood. Through January 8, 2023.