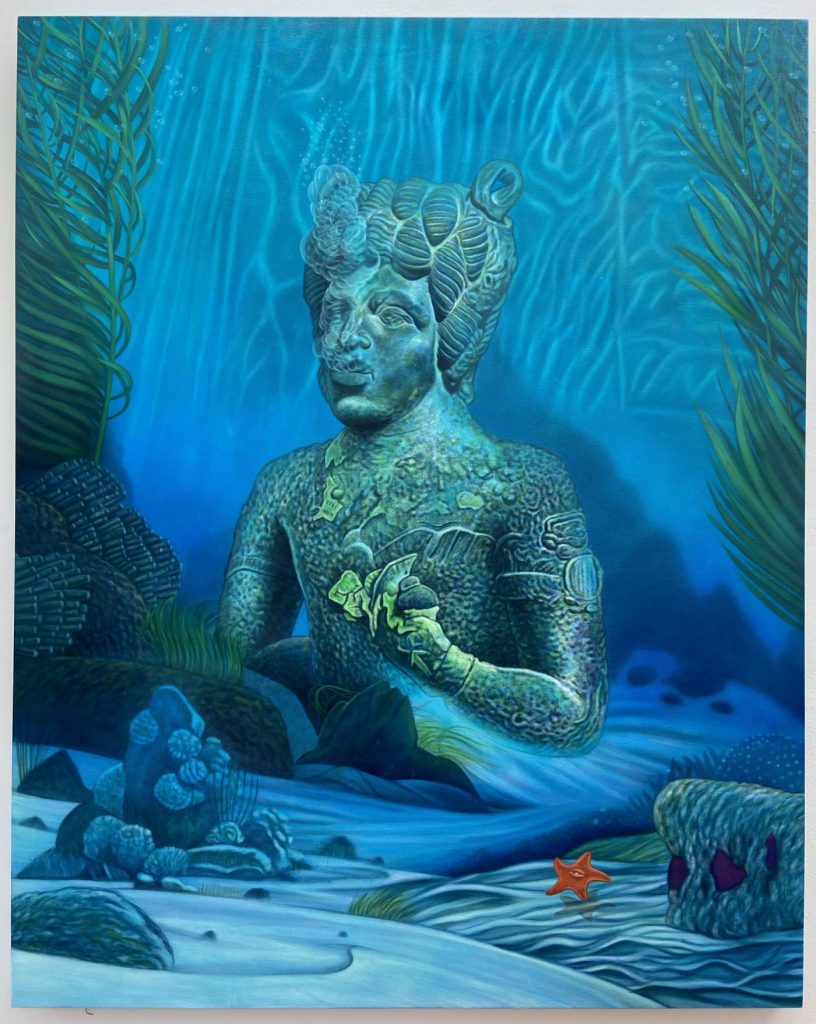 Inspired by his views of Monterey Bay, California from his new studio, Kajahl brings to life his striking vision of a fictional aquatic world for his latest solo exhibition. As his second solo show at the Monique Meloche Gallery, “Submersia” explores this world’s ecosystem through eight oil paintings, taking the viewer from the shifting currents of the ocean’s surface to the dense sands of the oceanic floor. Within this boundless world, teeming with mythical water beings, Kajahl imagines how an artifact might live to outgrow its original meaning and conveys what it looks like for cultural relics to take on new life.

In the world of “Submersia,” viewers observe two kinds of fictional creatures—Oceandwellers and Iceberg Entities. Aptly named by Kajahl himself, their names allude to their characteristic qualities. Iceberg Entities resemble icebergs that drift in the sea, and Oceandwellers reside on the ocean floor, completely submerged underwater. Both species resemble Greco-Roman artifacts that imitate the likeness of people from Sub-Saharan Africa, possessing features stereotypically associated with African people, including wide noses, full lips and deep set eyes.

However, this is where the similarities between the two species end. While Oceandwellers are the embodiment of renewed life, Iceberg Entities represent artifacts in the state of decay. While studying the Oceandwellers, I wonder if, in this fictional world, the bottom of the sea was meant to be their final resting place, discarded by their previous owners, but regardless of where they came from, these creatures have come to belong in their surroundings. Like the organisms that share their habitat, Oceandwellers breathe the water around them, depicted by bubbles and plumes of air that escape their mouths. In addition, erosion changes the textures of Oceandwellers’ original materials to resemble the textures found in deep sea environments, such as in “Underwater Exhale” (2022), where the Oceandwellers’ mottled surface is reminiscent of the coral’s deep grooves.

In contrast, the Entities exemplify stages of thawing, with jagged cracks and sheen from melting ice appearing across the ice being’s body. In “Iceberg Entity II (Glacial Fracture Head)” (2022), ruptures from this Entity’s past can be seen between the now-frozen shards of ice making up its top half, but in “Iceberg Entity IV (Cracked Head Thawing)” (2022), water runs down the Entity’s frozen chest in long, round drops. Though we bear witness to this species’ imminent disintegration, the Entities still retain a stately presence. Above the thick waterline, the strong-shouldered beings hold the viewer’s gaze firmly, and beneath the water’s surface, a light-blue glow surrounds each Entity’s bottom half.

Using the properties of water, the artist skillfully conveys that these artifacts are not limited by their physical impermanence. Kajahl illustrates water not only as a liquid, but in all its states. Sentient icebergs melt into the water then evaporate into the clouds that replenish the ocean the Oceandwellers breathe. When exposed to the passage of time, Kajahl’s artifacts adopt new forms but never lose their essence. Their significance lies in their impact, which, like water, is far-reaching and allows them to have life beyond their initial purpose.