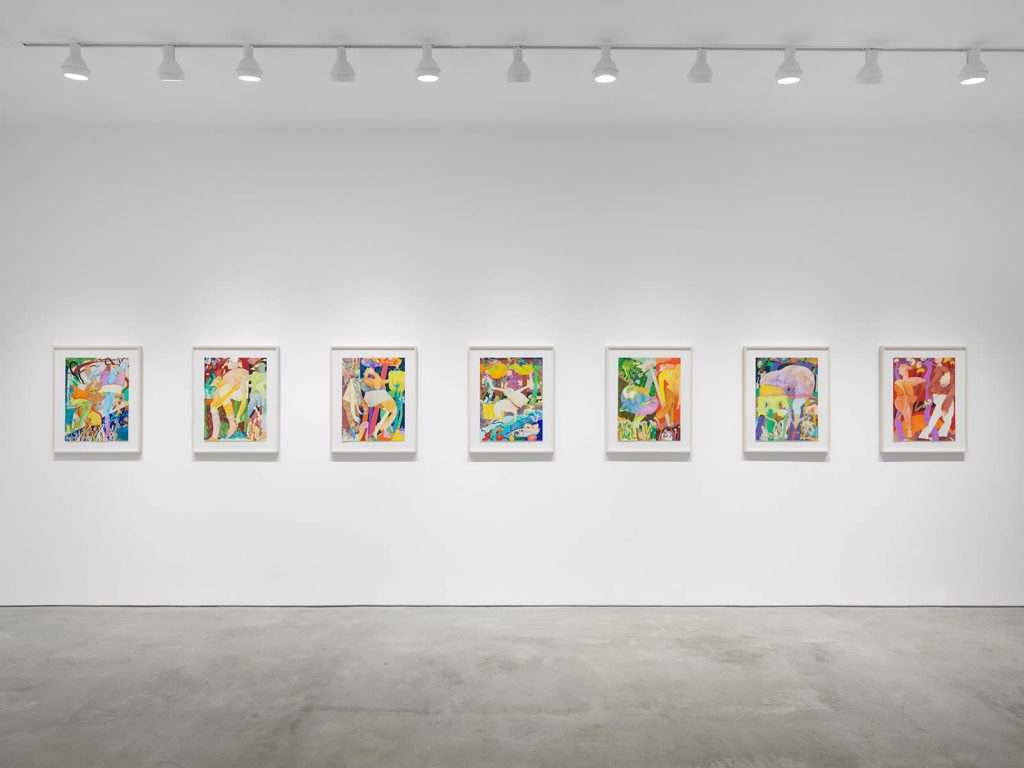 Known as one of the original Hairy Who Chicago Imagists, Gladys Nilsson’s “New Works in Watercolor” at Garth Greenan Gallery in New York features a vibrant blend of watercolor, gouache and colored pencil that radiates in an array of comforting, colorful hues. From a distance, they seem almost abstract. Upon closer glance, the paintings on paper are filled with bodies, portraits of characters with their limbs contorted, compositions of rotund elastic people drawn in a vast display of colors. Their skins are pink, orange or bright blue; lavender, electric green and sunflower yellow. 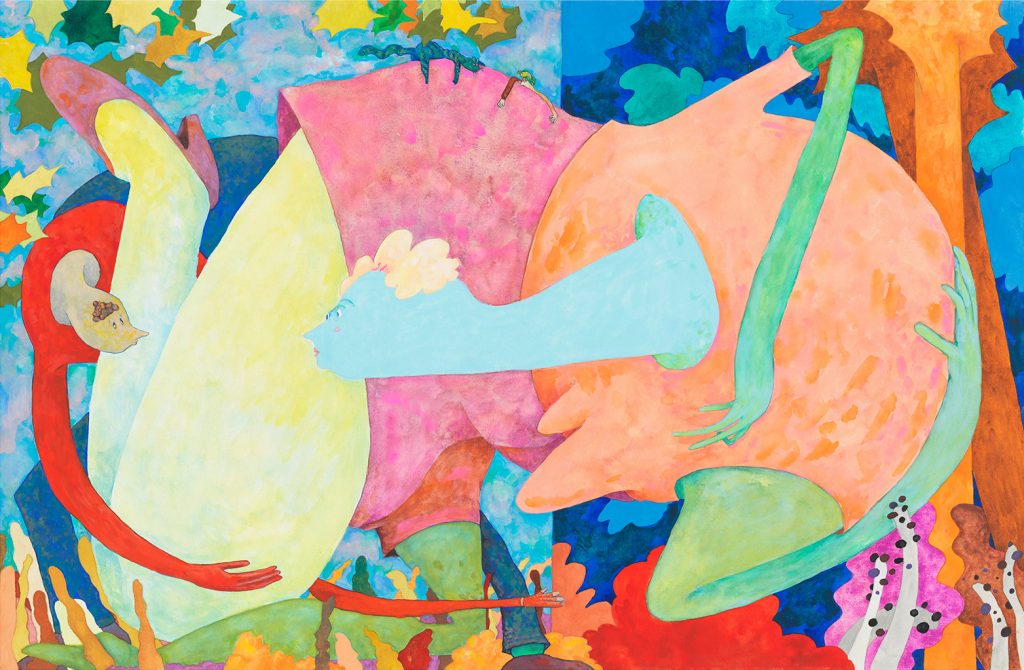 A desire for connection transpires across the vivid works. Hands reaching out to touch other hands, limbs intertwining, eyes looking up and down and all over. The bodies themselves feel gender fluid, but Nilsson once told Chicago magazine in an interview that she paints large-breasted women in her paintings to “differentiate between male and female.” The women that are depicted in her show take up most of the space within the frames, large figures that other smaller figures either sleep on top of or hide under, such as in “Scramblena.” 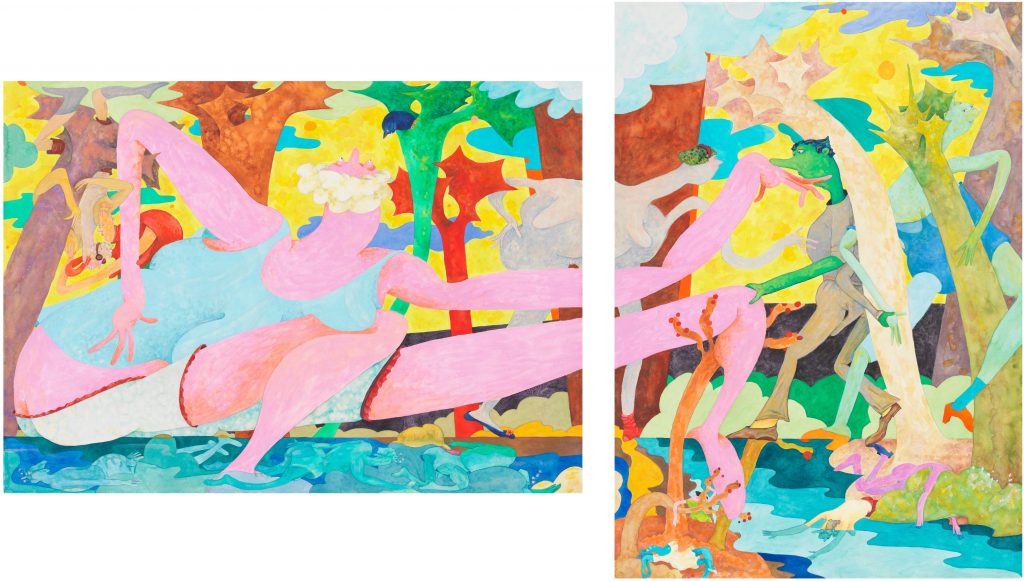 The highlighted piece from the exhibition, “A Stretch Too Far,” depicts a pink woman stretched across two separate frames. The pink arm outstretched is stroking the face of a green body, himself pressed against a tree. Looking further around the canvas, I notice even more bodies and limbs, intertwined with trees or with each other. Each vivid color appears to be the shape of a body or a tree. The varied shades of blue underneath the pink body are made up of several blue bodies swimming; camouflaged. The foreground and background are blended. In fact, most of the paintings are foreground-oriented, with barely any detail in the background other than textured, colorful brushstrokes. She mostly paints bodies and trees. 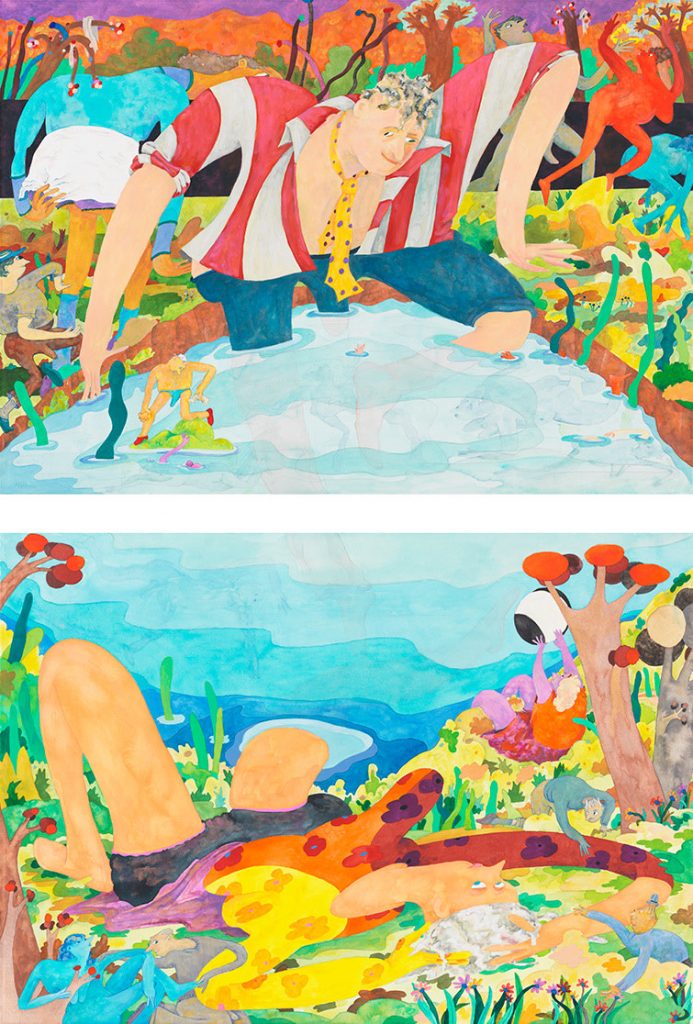 Nilsson’s playfulness reminded me of a sculpture by Nicole Eisenman called “Sketch for a Fountain’‘ that I saw in Münster, Germany as part of the permanent collection of works from “Skulptur Projekte.” Similar to Nilsson’s watercolors, Eisenman’s characters don’t seem to do much else other than lounge by the water or bathe in it. Their purposelessness is what feels so serene. They do not truly exist on earth, but rather in a liminal floating otherworldly space, where nothing really happens. In Nilsson’s painting “Pond (A Splitdytch),” two figures are looking at themselves across a small pond. There is a nauseating feeling of infinity in the painting. The pond feels like a mirror and a portal all at once.

Eye contact also transcends the boundaries of the frame in these new watercolors. If you follow where one character is looking, you will notice that they are perhaps looking at another character in the same painting, or even into another painting on the neighboring side, or across the room. The glances are almost erotic, while also embodying a playful innocence, a tension that does not resolve. I am reminded of how trees communicate, nurture and nourish each other outside the boundaries of our time frame, invisible to our human eyes. The bodies in her paintings seem to be doing the same thing.