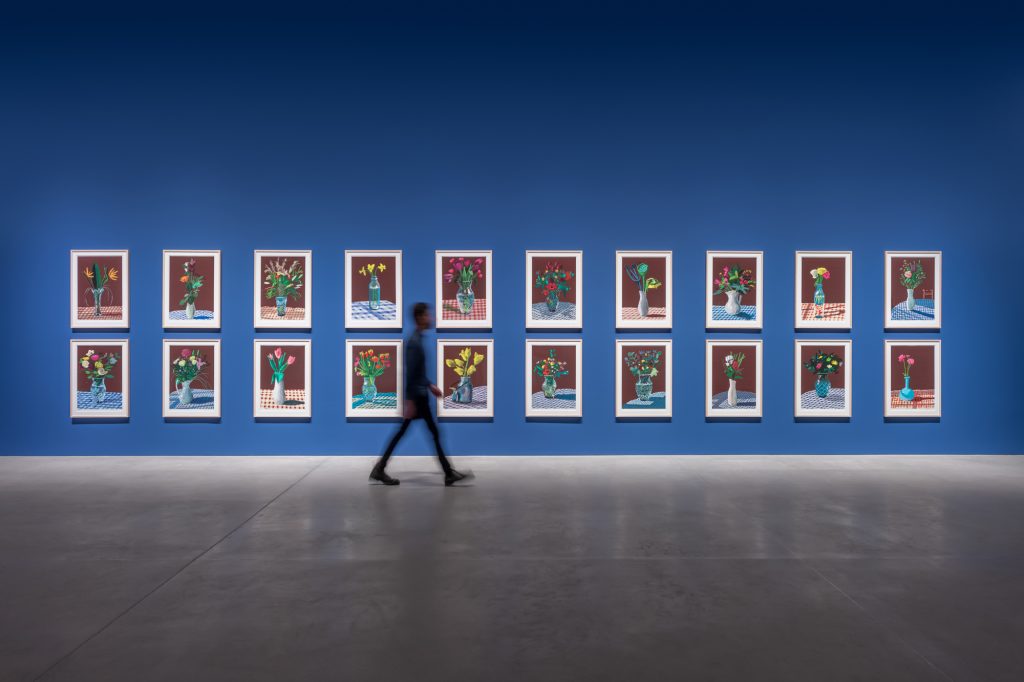 If you’re the sort of viewer who relishes the physicality of paint, the wafting, aromatic smell of turpentine perfuming studio air, or the inimitable hand of the artist as it’s embodied in the form of their chosen media, fear not: octogenarian painter David Hockney’s large-scale inkjet print-apalooza “20 Flowers And Some Bigger Pictures” at Gray Gallery is definitely not as bad as you’d think it would be.

Odorless, touchless and dimensionless though they are, the works on view, all composed on an iPad (or series of iPads strung together) are not without their charm. But they’re not particularly good, either. Part of a globe-spanning, five-gallery simultaneous display (Pace, L.A. Louver, Galerie Lelong & Co and Annely Juda Fine Art are in on it, too), the twenty eponymous flowers, landscapes and large photo collages capture the endearing, quirky restlessness of David Hockney the man, bound up in the lifeless surface of a mass-produced consumer product. That’s computers for you.

Unlike the scores of highly advanced brush packs that can render a “watercolor” or “conte crayon” drawing executed on an app such as Procreate almost indistinguishable from the real thing, Hockney at least, isn’t out to fool anyone. The “brushes” that comprise the binary fracture of his so-called painting are unmistakably electronic in a MS Paint ca. 1997 sort of way. This observation isn’t an insult, it’s one of the few genuinely praiseworthy aspects of the artist’s foray into the medium: a digital painting should look digital. 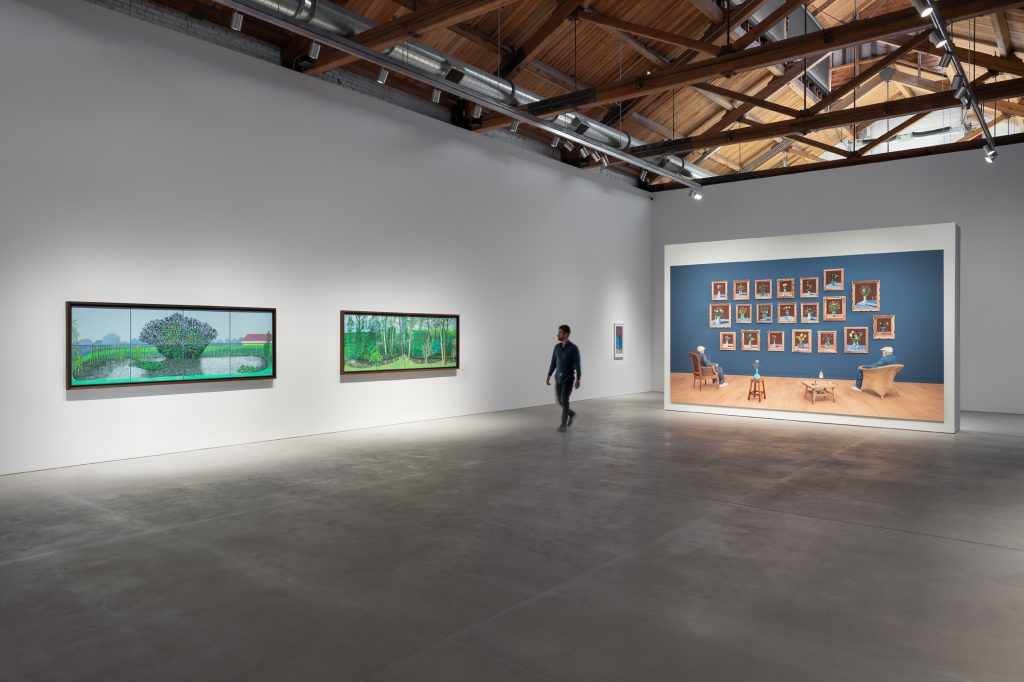 As an expressive tool, an iPad, or any other novel technology, ought to add new verbs to the creative lexicon, not simply refashion or reproduce existing ones. The fuzzy, rudimentary lines, with their complete lack of sensitivity and variation do precisely that: look uniquely electronic, if not especially captivating. And because of the program’s ability to deploy blurring and selective focus—making background objects less distinct in a manner that is more photographic than how we actually perceive space—Hockney achieves a hyperreal illusion of depth in his landscapes far superior to that found in many traditionally imaged paintings. “30th May 2021, From the Studio” is an outstanding example of this effect.

Admirably, Hockney has embraced technological change as an indispensable aspect of his creative practice with an enthusiasm that few artists of the past sixty years have shown. But the digital revolution has fundamentally altered our tastes and expectations in both art and in life. One need only to scroll through Instagram or watch an episode of Netflix’s “1899” to see how advanced computer assisted imaging has become in the past twenty years. Hockney’s iPad paintings and “photographic drawings” look dated and childlike by comparison. Revolutionary if they had been made in 1992, perhaps, but little more than a quaint and anachronistic curiosity in an era of advanced AI and thoroughly convincing deep fakes. Their strength, that they look like they’ve been made on a computer, is paradoxically, their weakness. (Alan Pocaro)

“20 Flowers And Some Bigger Pictures” is on view through December 23 at Gray Gallery, 2044 West Carroll.