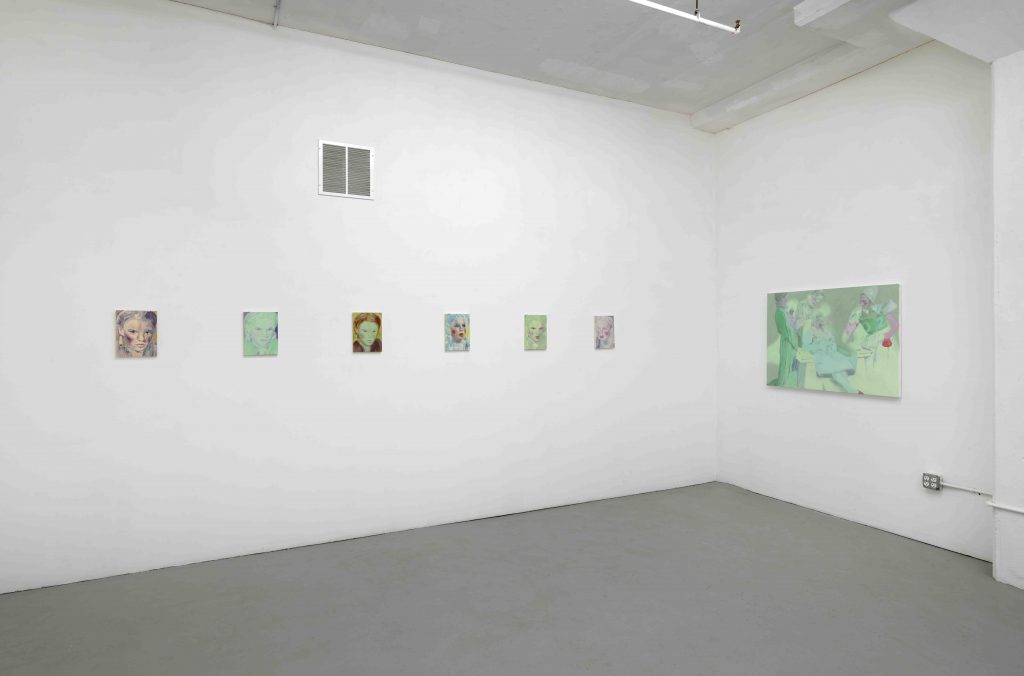 “Everything Was Forever” is a poetic sentiment that mirrors loss and sentimentality. Delving into the film “The Wizard of Oz,” Marina Ross’ paintings play with cinematic foreshadowing to depict a range of stills of Dorothy Gale, as played by Judy Garland. The work functions as a timestamp, catapulting the viewer into the void of absence; the present is consumed with mourning the past while fearing the future. Viewers are asked to indulge in the replay by rewinding or fast-forwarding to relive and avoid the inevitable moment before or after. Ross invites us into the Land of Oz to witness, unfold and grieve the inevitably slippery complications of embodiment and loss.

Dorothy is all-encompassing; she is the archetype of hope, spectacle and the desire to transcend the limitations of narrative. The sequential portraits of Dorothy haunt as much as they tease the viewer. She is the siren, the virgin, the possessed and the temptress. Each portrait is a screenshot of femininity—or perceived femininity—that flickers back and forth, refusing to stay one-dimensional. Ross’ use of the multiple calls attention to the linear sequence of narrative in film. Dorothy’s longing gaze inward is a spectrum that frames a line of portraits. She turns toward herself, evoking the sensation of watching the self in an infinity mirror (or dressing room) to witness the self as fractured and whole. She is both Judy and Dorothy. 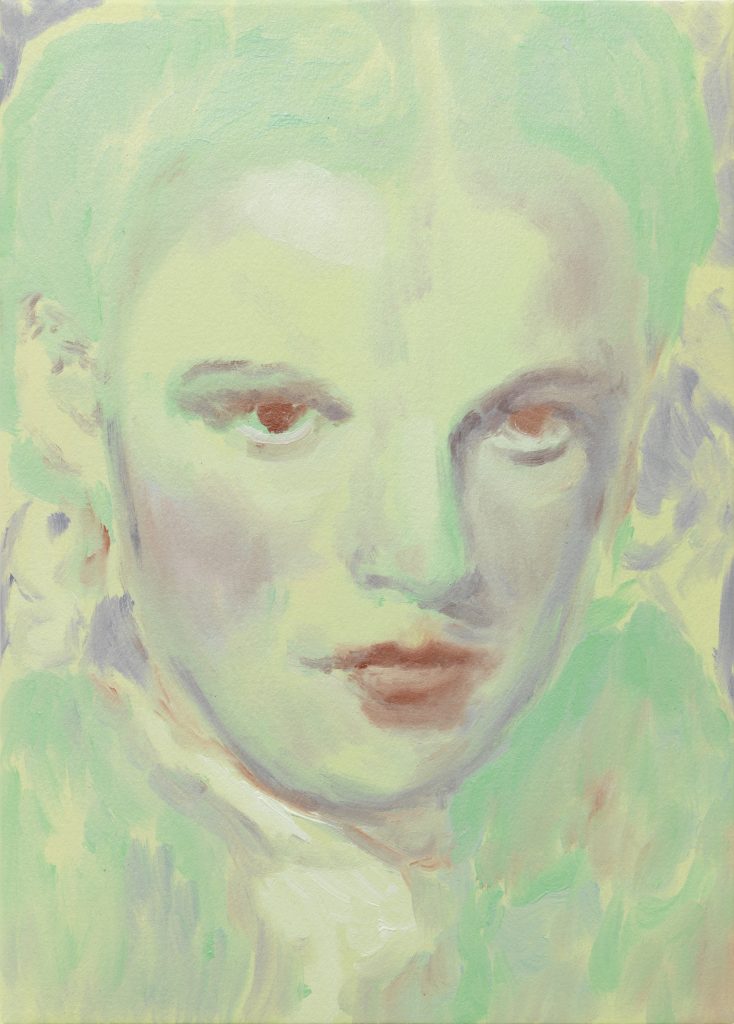 In Ross’ paintings, Dorothy reflects the temperamental stages of grieving; she glares one moment, red eyes piercing, and the next, she is jovial, looking toward the future with hope. The paintings reflect this shift in tempo and temperature, as fast as a suspected mood swing or temper tantrum. Dorothy is simultaneously infantilized as a grieving lady-in-waiting and fetishized through her girlhood “goodness.” The precariousness of her perceived moods, a common marker of lunacy, hysteria and insanity, render her “unable” to save herself. The complexity of her emotions is distressing. She must be saved from herself. This is an all-too-common hetero-patriarchal view that dominates the medical industry and American culture’s perspective of grieving (such as sorrow, crying, weeping, sadness, depression). Any feelings independent of rage or anger are viewed as feminized threats that must be medicated, anesthetized, or silenced. Ross’ Dorothy is anything but a simple farm girl; she is an ever-shifting performance of a Midwestern milkmaid gone sour.

Her multiplicity alleviates and exacerbates the fear and pain of being caught somewhere in the middle. Ross’ Dorothy is the embodiment of loss and the performance of it. When is the performance no longer a performance, but real? This feels akin to the sorrow of the lived performance of femininity, where the expectations of others often outweigh the performance. Ross’ paintings beg the question, “How do we transcend prescribed narratives that exhibit the facade of happiness, wholeness and contentedness when these narratives do not align with our own story?”

Ross’ cotton candy palette and mark-making are mesmerizing, haunting and playfully erotic. Creamy pastels are paired with acid yellows, greens and blues to etch a Technicolor tension that freezes the figures in a dreamlike state. The surfaces are blurry and hazy, like an overpowering sedative, a feeling Dorothy must have experienced after falling asleep in the field of poppies. The paintings are saccharine and intoxicating, leaving the viewer with pangs of withdrawal, hoping for another moment of bliss. Ross’ sensitivity to forbidden pleasure is reminiscent of Lisa Yuskavage and Jean-Honoré Fragonard’s paintings. Like their work, Ross’ paintings seek pleasure in escapism, yet their eroticism grows from a soured dystopian view of linear narrative. 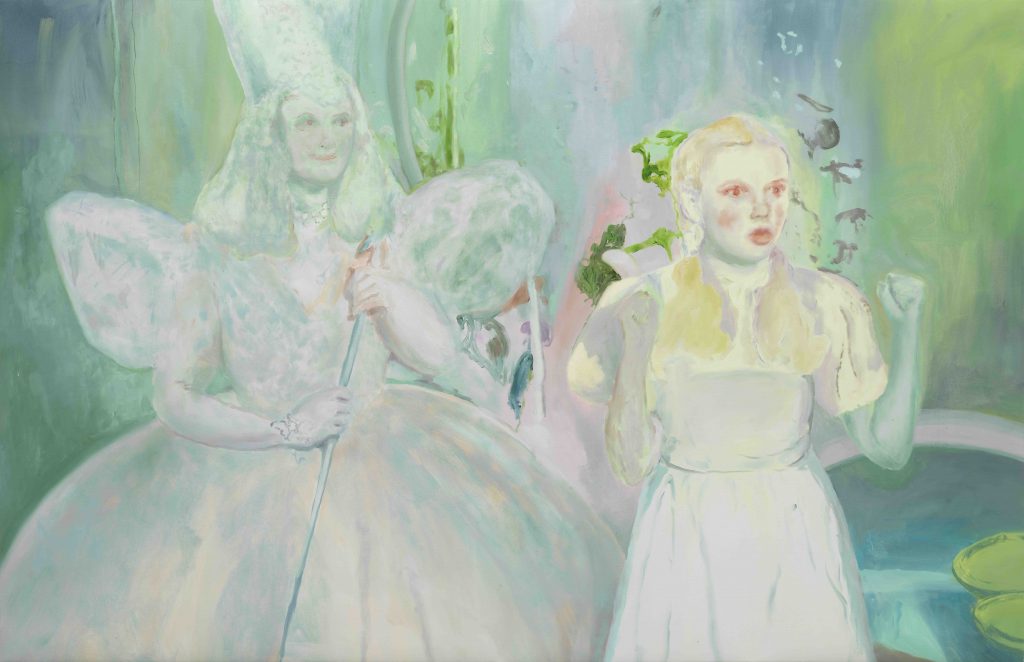 Ross lulls us into a state of awe long enough to forget the original story. Euphoria is clouded by a series of gestures that obscure rather than articulate. The artist presents us with secondary characters like Glenda, The Good Witch, alongside Dorothy’s helpers; they are passive props to witness Dorothy’s becoming. In “There’s No Going Back,” the viewer is presented with a red-eyed, ruby-cheeked Dorothy, her fists poised with hope as she wishes to return home to a simpler time, but there is no release. Glenda and Dorothy are frozen and chromatically drained. Like Luc Tuymans, Ross dissects the cinematic image of goodness through erasure via wiping and chromatic bleaching of the scenes until parts become anemic. The structure of the narrative dissolves, yet Dorothy remains the only character fully intact. In Ross’ painting titled “Invisible Layer,” the stage is set: Dorothy is depicted as a reality-show makeover contestant. The work references Dorothy’s synthetic nature and the constructed reality of her inescapable narrative. But, is the goal to escape, to witness, or to realize? Like the curtain pulled back at Oz, Ross’ paintings reveal that this is all a performance.