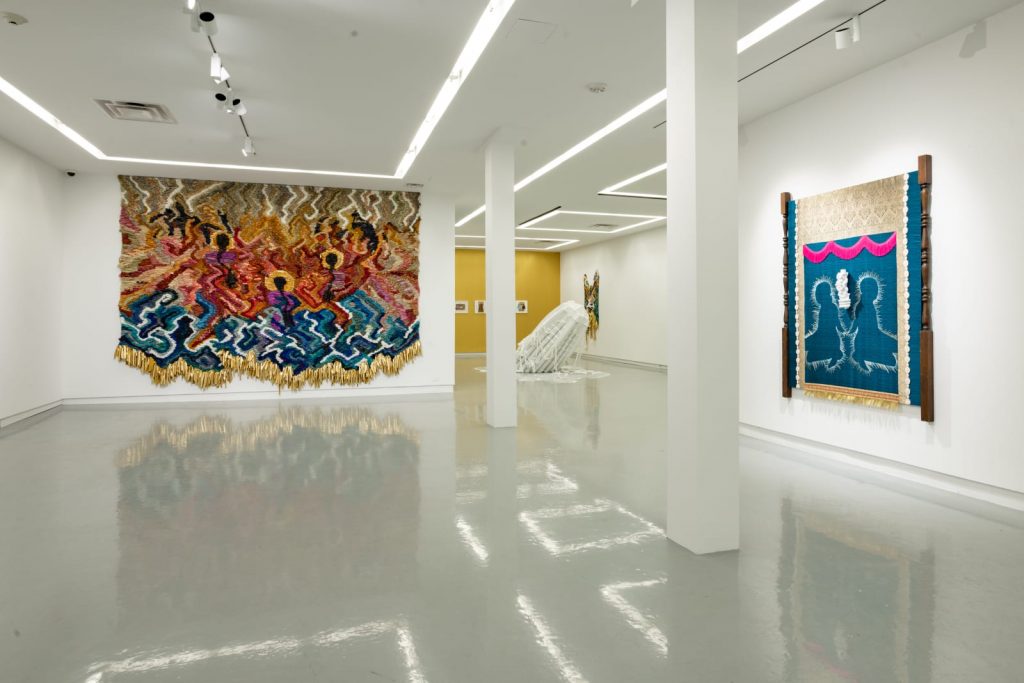 The energy in the gallery is palpable. The walls are filled with thick woven sculptures featuring bold colors and materials such as acrylic, vintage saris—including the artist’s mother’s own—tassels, found fabric, trim, ghungroo bells, boas and beads. Elsewhere: gouache, watercolor, vintage book pages and appliques. And let’s not forget the salt—but we’ll get to that in a second.

Suchitra Mattai’s family has its roots in the wave of Indian migrants who arrived in British Guiana over a century ago to work as indentured servants. An immigrant herself, Mattai left Guyana when she was three years old and has since lived in Wolfville, Nova Scotia; Udaipur, India; and, in the United States, in Philadelphia, New York, Minneapolis and Denver, where she currently resides. Mattai’s background is deeply tied to her work, which uses mixed media often associated with colonialism and the domestic sphere (think: embroidery, weaving and fiber elements) to rethink and reimagine history, memory and identity. 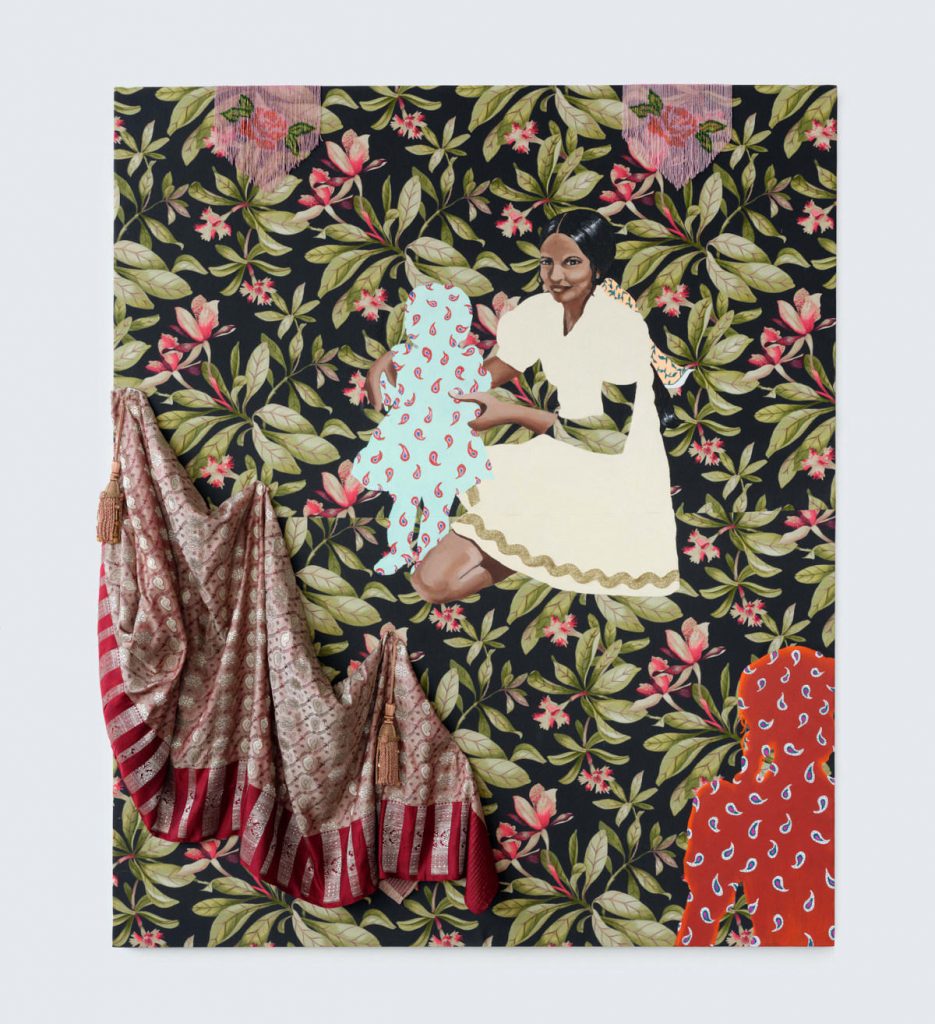 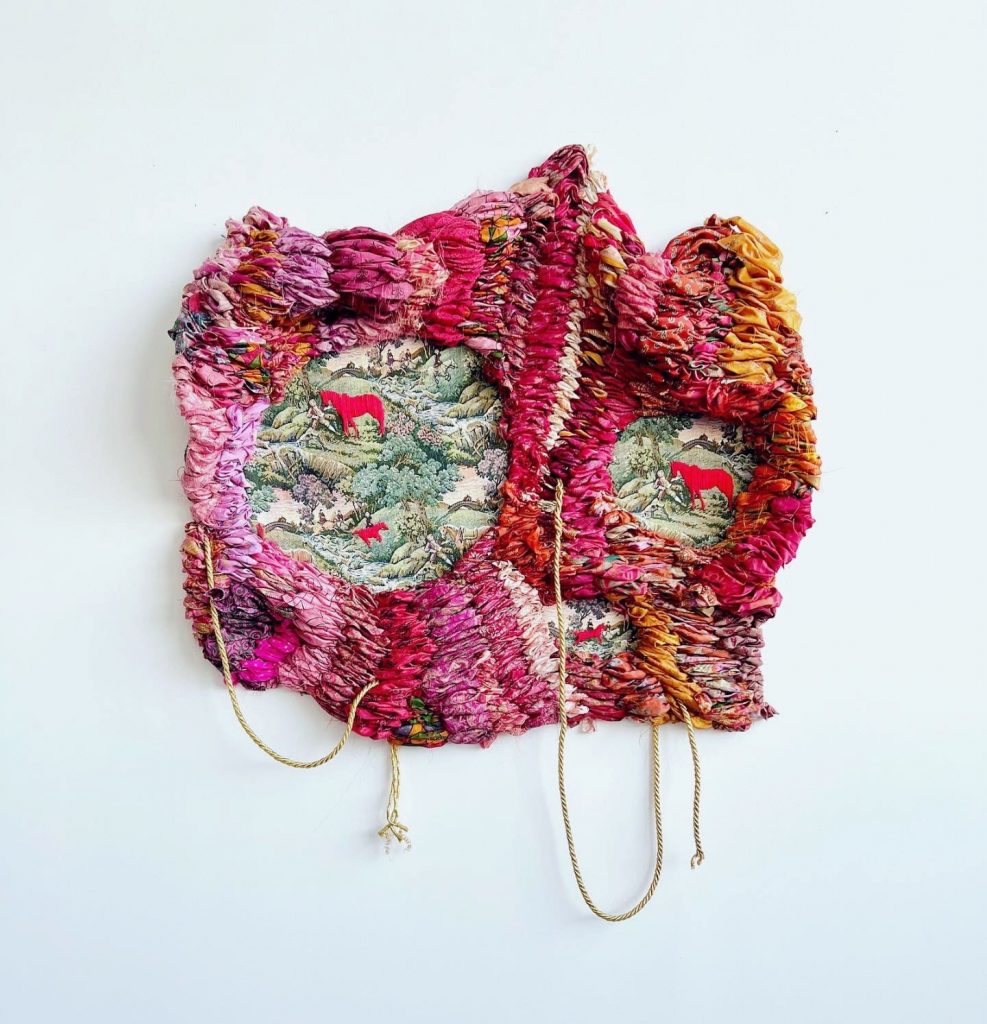 In “Osmosis,” an exhibition on view at Kavi Gupta that takes its name from the migration process of water molecules from one region to another, the Indo-Caribbean American artist considers the saltwater ocean migrations that shaped her family’s cultural and geographic heritage. “A Glimmer, A Glow” (2022) is based on the artist’s favorite photograph with her mother. It features Mattai as a child who’s learning how to walk, but in a quite abstract way (a cutout; her body shape filled with a teardrop pattern) that speaks to memory’s abstract nature—especially those of our childhood relationships with our parents. It was taken in Guyana circa 1974. “The In-Between, the Here and Now” (2022) is a woven tapestry featuring two round windows onto a dreamlike country scene of abundant greenery and bright red horses galloping free—a nod to the struggles of those who made the in-between passage from South Asia to the Caribbean in the aftermath of slavery that simultaneously serves as a hopeful note. Her work is full of color and life, her imaginary landscapes idyllic and her materials soft and fuzzy. But at a closer look, one gets a better idea of the major themes and deeper meanings within her narrative. 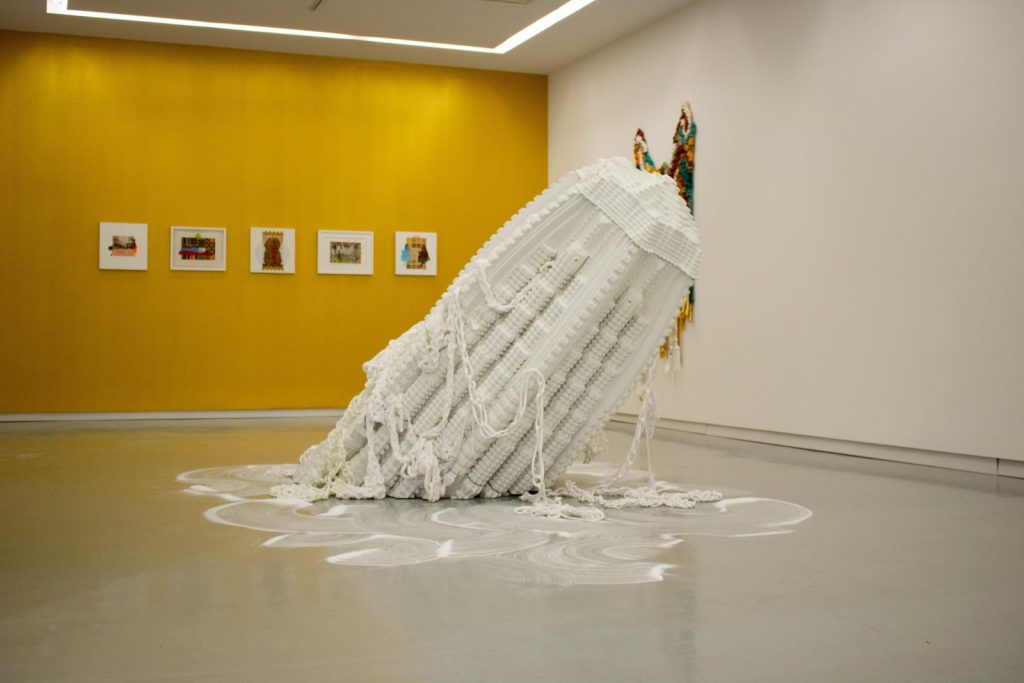 Amid the woven wall works a life-size sculpture takes center stage. “Osmosis” (2022) is made out of salt, fabric, cords and wood. Here, salt is used as both sculptural medium and a chemical instigator of aesthetic transformation. Mattai looks at the sea as a major influence to her personal, familial and cultural history. “Osmosis relates in a way to the flexibility of storytelling,” she says. “It’s about agency, pushing and pulling, ebbing and flowing, and the curiosity of probing what’s revealed, and unearthing what’s concealed.” To her, it’s about the emergence of something and the loss of something—both at the same time.

The salt-encrusted sculpture rises from the gallery floor much like the priceless ruins in the ancient port city of Mahabalipuram in Tamil Nadu when uncovered by a tsunami. The city, known for its Shore Temple, is designated by UNESCO as a World Heritage Site and has been the subject of scholarly curiosity: Legend has it that Mahabalipuram had six other temples—seafarers referred to it as the land of seven pagodas till even two centuries ago—which were consumed by waves. It brings to mind vanishing histories of eras bygone.

But “Osmosis” is less about displacement, disorientation and belonging—it’s ultimately about courage, strength, perseverance and transformation. Informed by her global perspective and experience, Mattai looks at the roots in the distant past, to make sense of the present and the future. Her work might be deeply personal but as she fearlessly embarks on this journey she urges one to do the same.