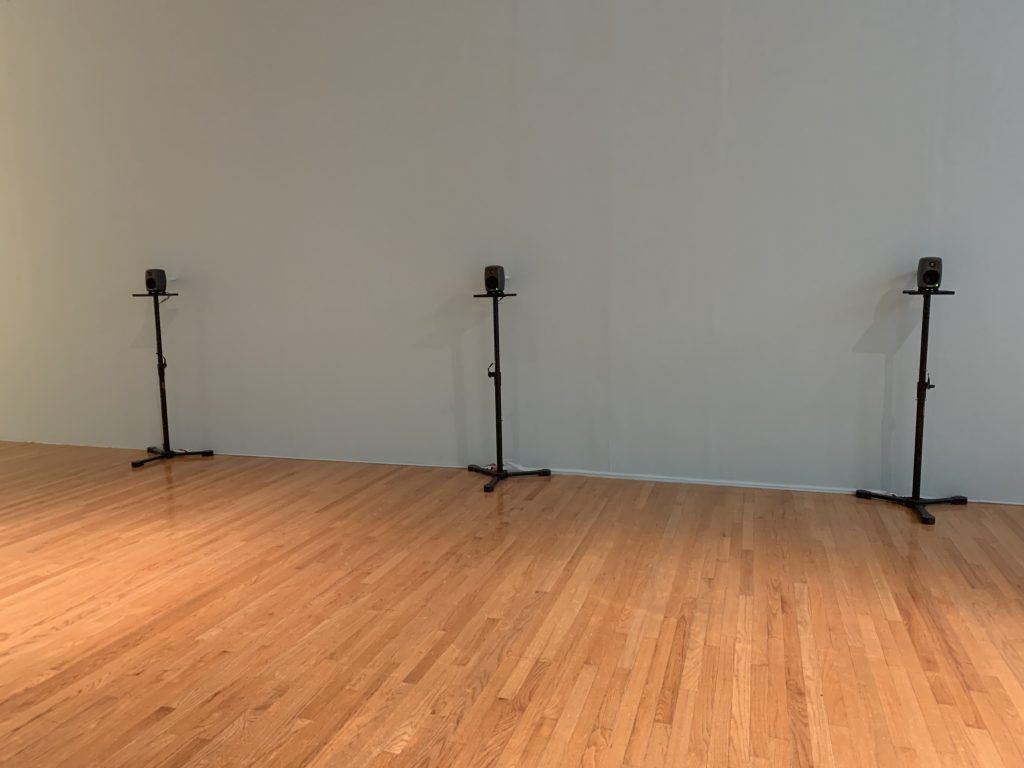 If there is one thing to notice it’s the sound. Eight speakers along three walls point toward the middle of the room. Some play familiar sounds: chirping birds, humming wind, rushing water. Others are harder to place: loud fuzz, distant voices in song, a crackling that might be a fire, a stick or a crinkled paper bag. And they transform. The loudest corner of the room quickly descends into quiet, while chanting voices give way to metallic gurgling. To experience Norman W. Long’s “Calumet in Dub” exhibition at the Glass Curtain Gallery is to absorb the sounds of a space, all at once, as they shapeshift around the room.

This isn’t a novel experience to someone who has lived a day on earth. We constantly take in sounds, process them and unconsciously sort them by relevance. But paying attention to these sounds is a different task, and understanding what they might mean is another matter entirely. As Eric Leonardson, founder of the Midwest Society for Acoustic Ecology (of which Long is a member), explains: “Opening up your ears to everything around you gives you a deeper awareness. It also raises questions. If something bothers me, why does it bother me? What is making it? An individual or a system? Should I do something about it? Does it exert control?”

Calumet is a region shaped by movements: the labor movement, the environmental justice movement and the Great Migration. These forces—economic, environmental, demographic—affect the region holistically, their influence always present but constantly shifting. Similarly, one can’t pick a specific spot in the gallery from which to “correctly” experience it. Everything converges and nothing is steady. 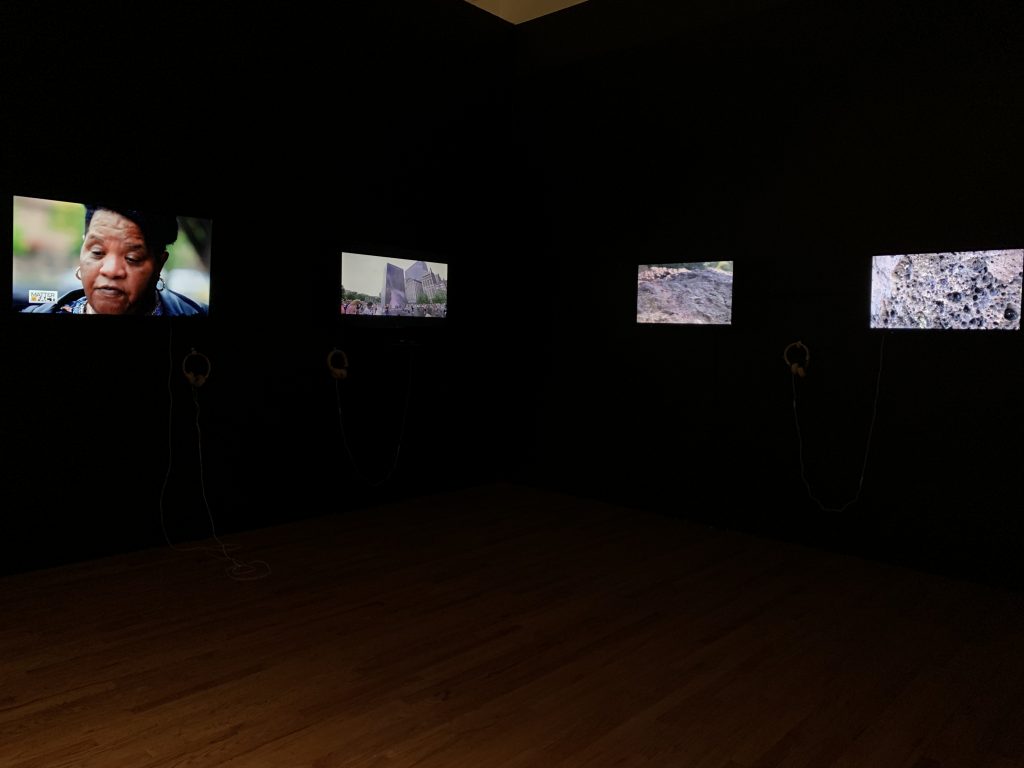 Four monitors in the backroom play documentaries that inspired Long’s work, as well as field recordings from the Calumet region/Photo: Parker Yamasaki

Taking inspiration from Annea Lockwood’s “A Sound Map of the Hudson River,” a 1989 album of field recordings from fifteen sites along the Hudson, Long selected sites along the Calumet and Little Calumet Rivers in Southeast Chicago to ground his exhibition. While Lockwood’s recordings demonstrate different characteristics of the river based on geology—the way the water flows never sounds the same twice—Long’s recordings overlay geological characteristics with ecological and historical context. 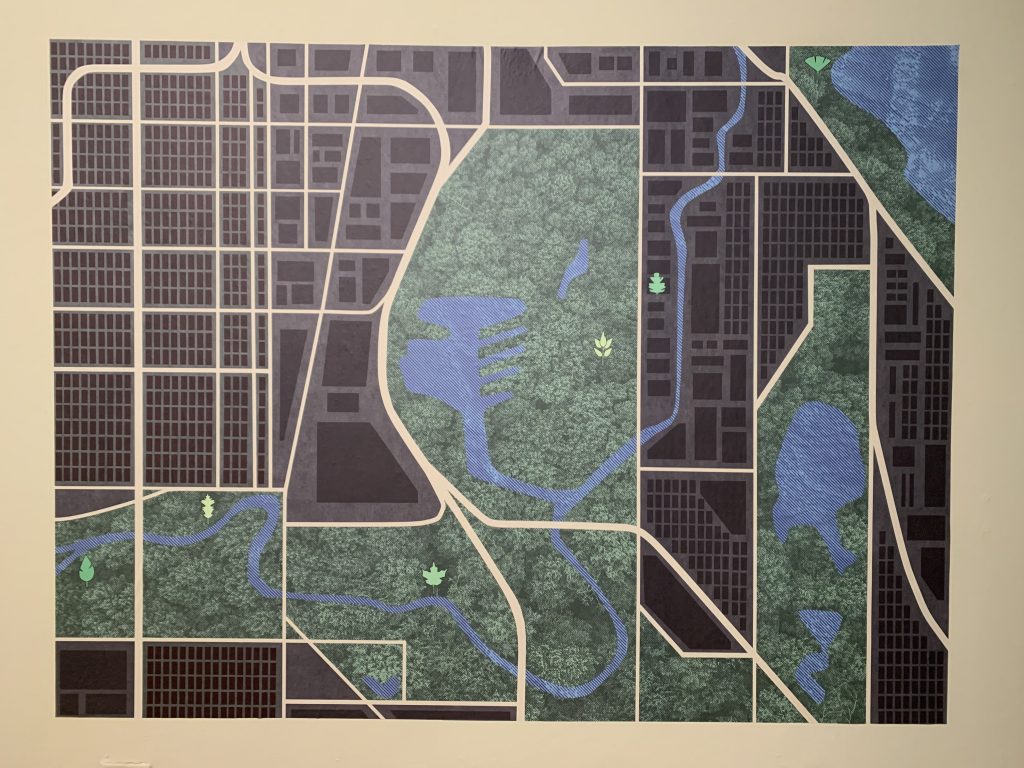 A map of the Calumet region with indicators of where Long’s research is grounded/Photo: Parker Yamasaki

Beyond the gallery’s main room are two enclaves that hold a sliver of Long’s research for the project. Six sites along the Calumet are displayed. Each is accompanied by a photograph, notes from Long’s visits, and datasets that monitor the sites’ air quality, water quality and demographics. While the photographs and notes are comprehensible to a general audience, the data is dense and uninviting to anyone without specialized knowledge. These doorstop-thick datasets show numbers like “RadNet monitor data from Chicago 2017” and “African Americans as a percent of the population by large U.S. cities.” For “Calumet in Dub,” Long converted these datasets into acoustic tracks using a process called sonification. To put it simply, sonification is data visualization for the ears.

The partition walls top out at around three-quarters of the gallery’s height, and the sonified data and field recordings from the front room’s soundscape seep into the research rooms. At times, this mixture enhances the visitor experience, like while one is looking at a photograph of the Acme Steel Company mill, or skimming Long’s notes about the site.

Other times, as when attempting to view the NBC and PBS programs that inspired Long, the sonic effects conflict. Buzzes, hums, chants and drones easily creep under the loose-fitting headphones attached to the monitors, and add a strange backdrop to the predictable inflections of a cable documentary. To really focus on the screen one would need to press the headphones tightly to their ears, but then again, maybe we’re supposed to hear it all.

Omnivorous listening doesn’t just mean hearing the train pass overhead and the ping of a chain against a flagpole. It also means listening to the bigger systems in that environment. What do we hear when the water laps against the slag at Steelworkers Park? Or the wind rustles non-native Phragmites that surround Big Marsh? Do we hear decades of restoration efforts and environmental activism that converted the sour soil into peaceful and walkable public spaces? What does freedom sound like? Is it the sound of a leaf skittering across the sidewalk? Long’s piece asks us to hear the environment in its totality: its surfaces, its complicated histories and all of the questions that haven’t been asked.