Entering the gallery feels like stepping into a different world. Two video projections stand across from each other, filling the space with pinkish light that often becomes purple and blue. Mesh dividers hang from the ceiling creating pathways between different art forms (works on paper, embroidery, ceramics) and floor pillows invite the viewer to take a minute and sit; think.

The video begins and so does the transport to the Indian Himalayas—more specifically to the mountain Nanda Devi. There, in 1965, in an act of Cold War espionage, the CIA and India’s Intelligence Bureau collaborated to install a plutonium-powered spy device to intercept Chinese nuclear missile data. Only things took a turn: A terrible storm interrupted the mission, and the device was abandoned on the mountainside. To this day, it’s nowhere to be found—its presence made apparent only by nature’s ongoing radical transformation. 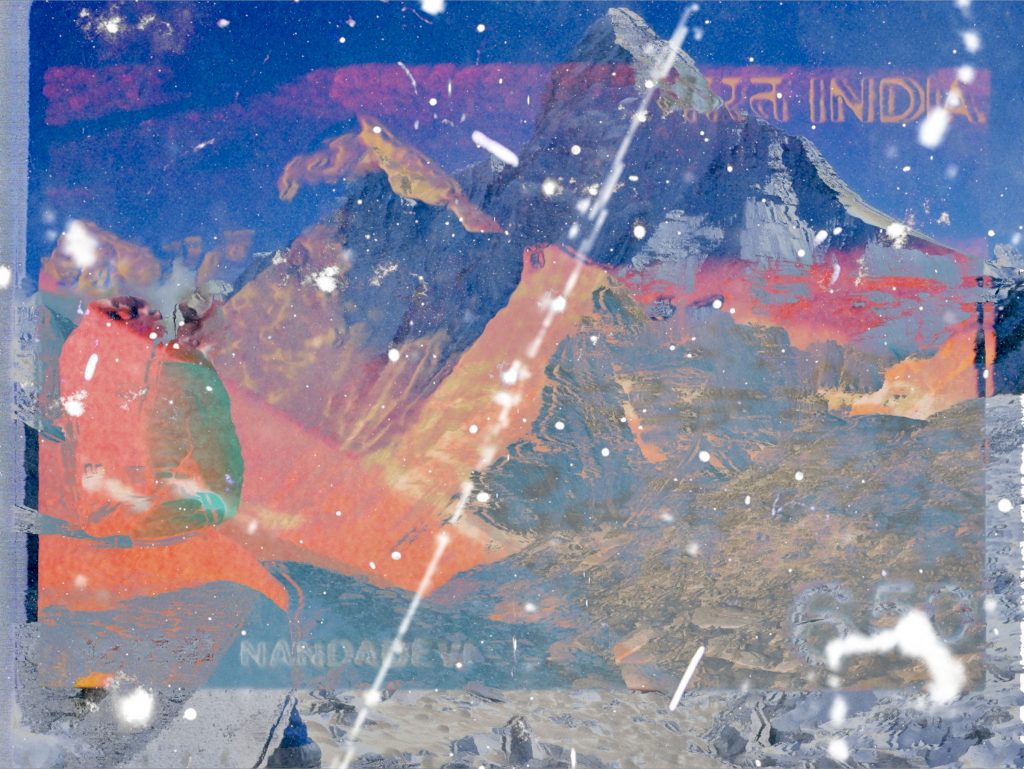 Considering this devastating aftermath in conjunction with another important incident in her life—a 1978 mountaineering expedition, where her father took a photograph of Nanda Devi that ended up being made into a postage stamp—Himali Singh Soin brought “Static Range” to life. Reflecting on a variety of real-world concerns, ranging from the climate crisis to issues of ancestry, history and identity in the postcolonial era, the London- and Delhi-based artist creates elaborate fictional worlds through immersive installation, music, video, performance, textiles, ceramics and poetry. The public and the personal intertwine.

In her first solo exhibition in the United States, pressing environmental issues take center stage in the form of a love letter—one from the spy device to the mountain narrated by the artist herself. Soin’s voice, slow and emphatic, is only interrupted by the sound of the nagada kettle drums of the Kumaon region where Nanda Devi is located—the music of the Uighur community in the Xinjiang region that is also home to the Lop Nur nuclear research facility. Imagined scrambled radio signals complete the soundscape. Across the gallery, a fifteen-minute animation plays of the image of the postage stamp as it is exposed to radiation—the mountain turning ice blue, bright orange, ultraviolet, glowy pink. The lost spy device and the mountain appear to be in conversation. Perhaps a healing one. 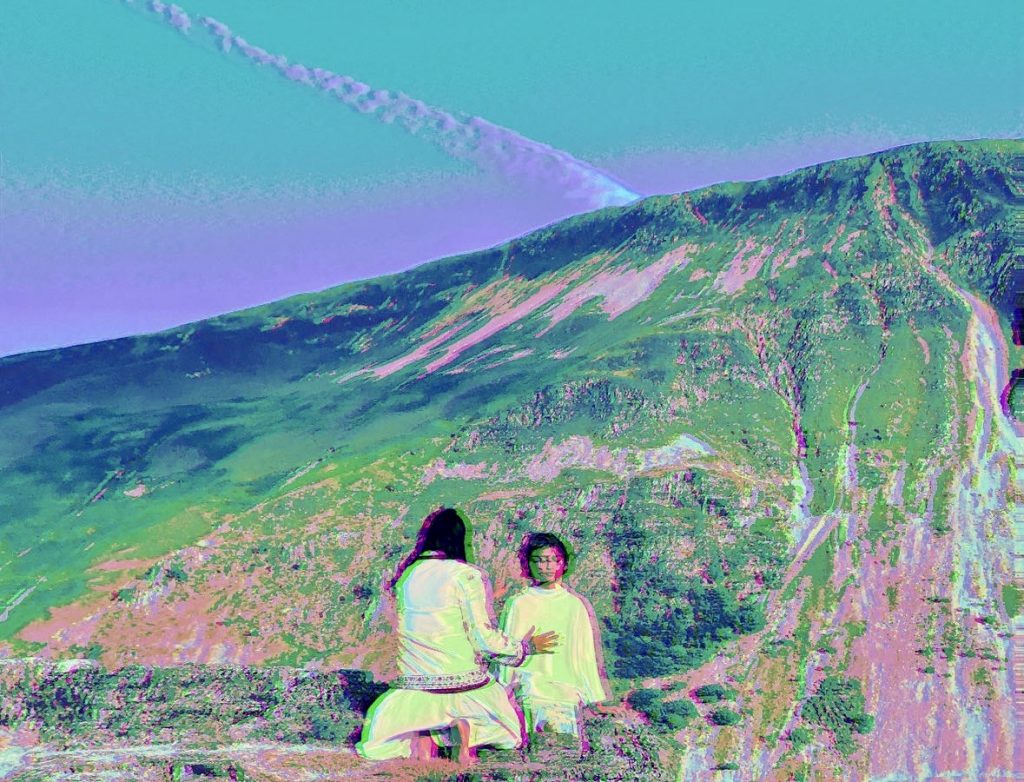 Himali Singh Soin. Still from “An Affirmation,” 2022/Courtesy of the artist

Soin, also a writer and a poet, uses words wisely. The connections she makes are intentional and so are the artworks she chooses to accompany her videos. Jordan Nassar’s response uses a Palestinian motif that shares patterns and forms with the Himalayan Panchachuli (five peaks) weave, to embroider an image of Nanda Devi mountain. Elsewhere lie a pair of nagada (kettle) drums handcrafted with beaten copper and goat hide by artisan Sudama Lal Tamta in the Kumaon region. They are the ones used by composer David Soin Tappeser for the “Static Range” video. Made of glazed porcelain, “Body of Light” evokes one of the earliest nuclear bombs, nicknamed “Fat Man” for its bulbous design. Developed by the Manhattan Project, the work creates connections between global nuclear sites—from the Lake District in England to Fukushima in Japan to Chernobyl in Ukraine and to Chicago.

To get a well-rounded idea of Soin’s work, a second exhibition is just two galleries away: “we are opposite like that” is an ongoing series of interdisciplinary works—performance, poetry, textile, video and sculpture—in this case, the artist presents a video that creates fictional mythologies for the North and South Poles. The lines between the natural and the supernatural blur in this magical realism tale that features an alien figure—a woman wrapped in an aluminum foil garment—emerging from the ice. Victorian England meets the post-human in an endless wander of the figure that transforms into a melting fossil. The storytelling is once again by the artist herself as she considers the differences between past and present, the consequences of our actions, the environmental catastrophe and ways we might be able to rectify it.

A mysterious force keeps the viewer pinned to their seat—whether a museum bench or a fluffy floor pillow. And it’s then and there that they start to see it, too: Soin may create speculative worlds but their impact is very much real.

Himali Singh Soin’s “Static Range” and “we are opposite like that” are on view at the Art Institute of Chicago through May 15, 2023.