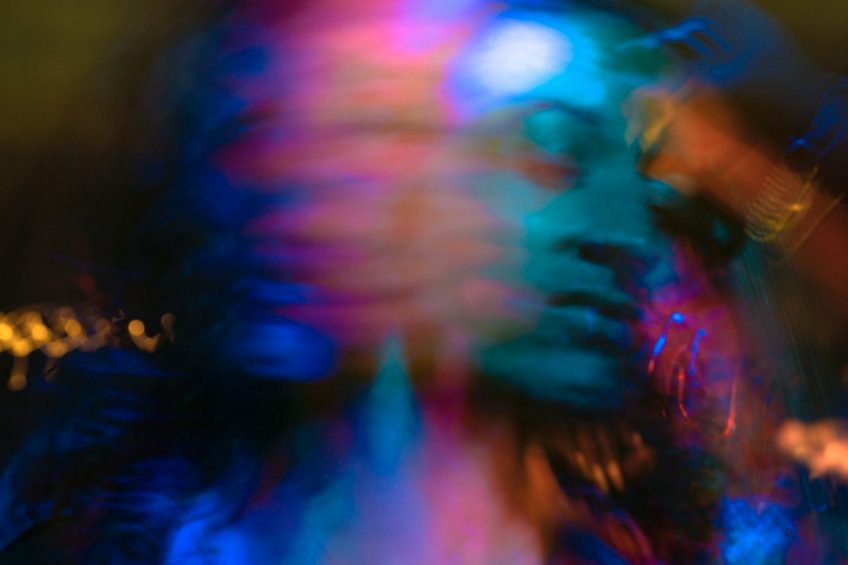 People gathered on December 17 to celebrate the debut of Heaven Gallery’s  “Love Dancing: Documenting Chicago’s Nightlife” in the most suitable fashion—by dancing the afternoon away to the compelling sounds of house music. While some felt more comfortable swaying to the beat from the perimeter of the room, many others confidently showcased their best footwork, their smoothest arm swings and one even showed off a classic breakdance spin across the floor. As friend groups and solo visitors mingled and eventually coalesced into one moving mass, the photographs that surrounded them, though they represent nights of the past now forever frozen in time, somehow pulsed with life in the presence of those who love to dance.

Born from a collaboration between Heaven Gallery and the Chicago Black Social Culture Map, the group exhibition “Love Dancing: Documenting Chicago’s Nightlife,” curated by Jeneca Onikoyi, presents a collection of photographs that document not only the city’s night scene but the people who bring it to life. From the perspective of three Chicago-based photographers—Seed Lynn, Kymon Kendrick and Shay Turner—the exhibit takes the viewer through lively settings, from inside of dense, heated dance clubs to bustling sidewalks underneath a night sky illuminated only by streetlights and camera flashes.

Many of the photographs in this exhibition feature those who, even if they are not dancing, are always moving. In one picture, a crowd huddles around a DJ whose hand hovers above a vinyl record mid-spin, and in another, two women grab onto each other as they squat down low over wooden floorboards. In a pair of photographs taken seconds apart from each other, a woman snakes around a broad-shouldered man whose back shines with sweat. Additionally, many of the subjects pictured in this exhibit are people of color and, as a Black woman myself, I was pleased to see people of color, particularly Black femmes, in spaces that inspire them to move with a carefree ease and a divine fluidity.

Photos of people outside of the club offer the viewer glances at what community looks like in a nightlife setting, such as in a picture where two girls, crouching over a concrete floor, take drags from their cigarettes while the tips of their cigarettes touch. A mix of candid and posed pictures—a woman dressed in red plastic-like fabric throwing her head back as she smiles, a young man wearing retro-style glasses and a zigzag-patterned shirt stopping briefly for a moment to throw a peace sign—gives the viewer intriguing access into the bursts of spontaneity and human connection that often fuel an exciting night out.

Contrasting this set of photos are pictures that experiment with color, light and shadow to create an alluring haze that encompasses its subjects. Flares of orange and blue light pulse around a dark figure wearing a beaded necklace, and a purple and pink blur partially obscures a face illuminated by turquoise light. I often could not make out more than a smoky silhouette of someone’s body or their face, but these photos convincingly portray how one might actually experience a dimly lit dance floor, where one might catch flashes of a person dancing across the room in an atmosphere charged with an ever-shifting energy that reaches even a club’s darkest corners.

On the day of the exhibition’s debut, I found myself wondering how my viewing experience would be different if there were no DJs to curate a dynamic rotation of house music, no lingering smells of sweet wine from plastic cups, and no one to dance with as I moved from picture to picture. What makes nightlife worth documenting is how it activates the senses, but this is also exactly why nightlife resists being archived. Though many of us resort to taking pictures or videos to help us remember a night spent dancing long after we’ve taken that midnight Uber home, it seems impossible to accurately and meticulously document what is best experienced in person. This exhibition stands to show that these moments are special because they are ephemeral. Through their effort to document a scene that consists of fleeting moments, “Love Dancing: Documenting Chicago’s Nightlife” teaches us to recognize these moments as they come, revel in them, and cherish them even after they have passed.