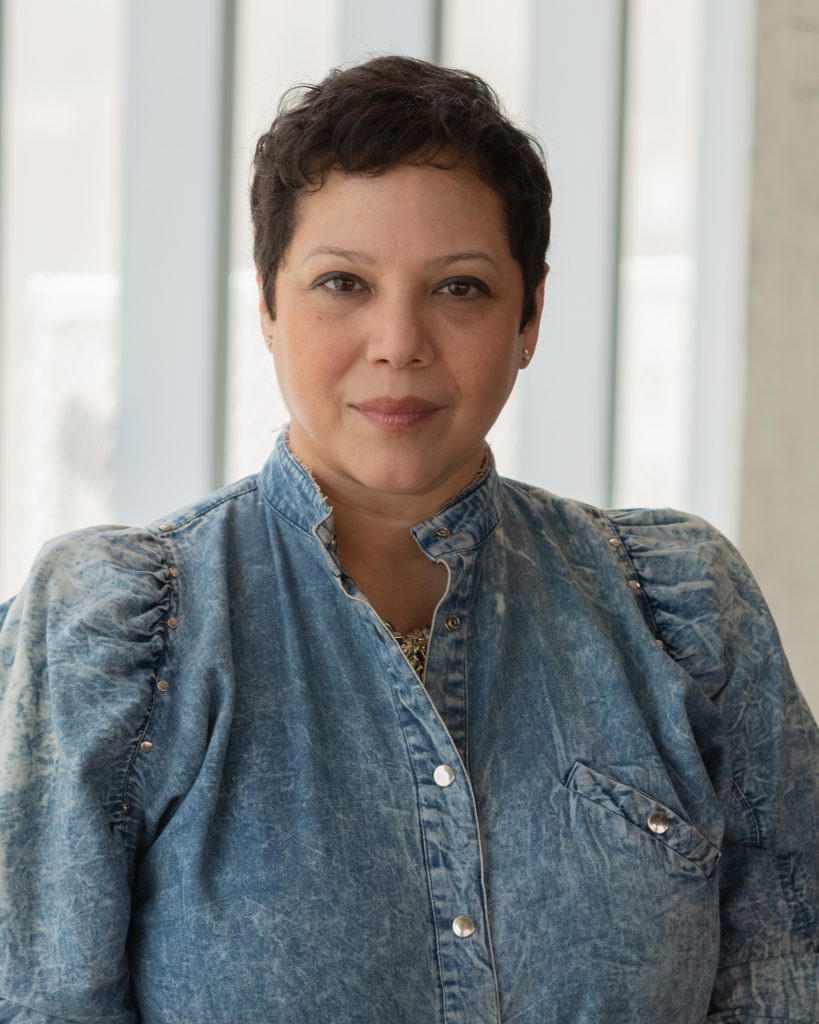 Edra Soto was in Puerto Rico when Hurricane Maria hit in 2017. She was visiting her mother when, she tells me, “I lost my landscape.” The destruction affected her immensely. She saw things that she felt she could not speak aloud. Soto is humble and kind; she speaks in a slow cadence, taking long pauses between thoughts. Her art reflects her empathetic personality. After being faced with the loss of her home landscape, she began to document the disaster. “I had never seen Puerto Rico the way that it looked then. I had never seen the landscape in that way. I felt, in my bones, that I was part of something historical.” She focused her photographs on broken trees and the clouded sky. 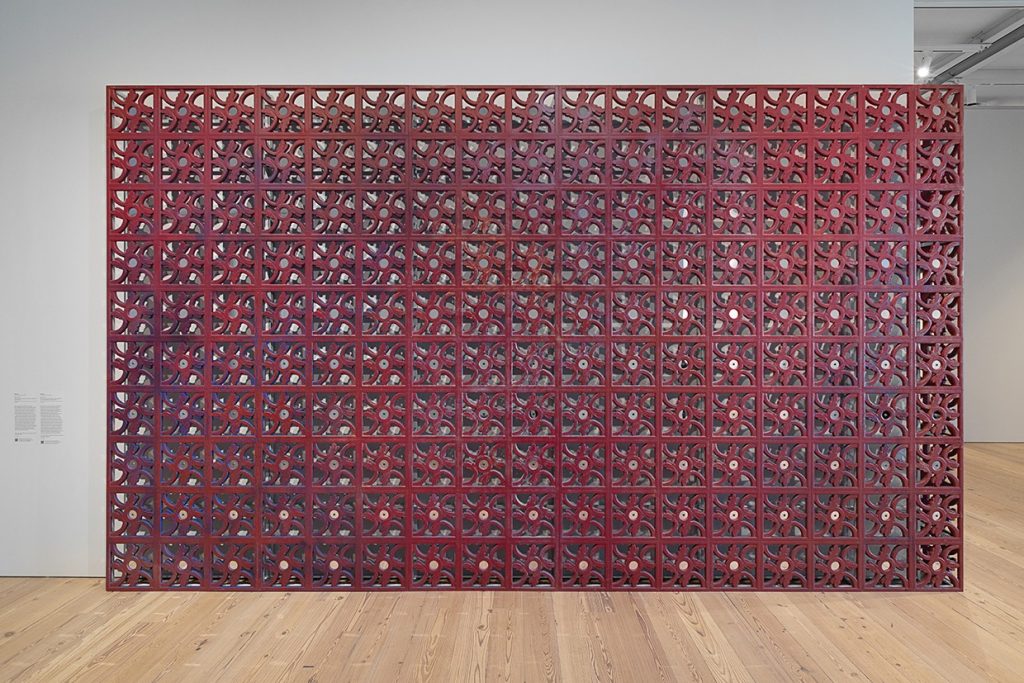 Soto’s native Puerto Rico has long been the source of inspiration for her work. Her decade-long series “Graft” is a way of replicating domestic architecture from Puerto Rico and transplanting it to the United States. Art historian Daniel R. Quiles says in a video for The Arts Club that “the theme that links this series is the form of the rejas, which is an iron fence design common to Puerto Rico. These are what we would call vernacular architecture. We’re not talking about landmark masterpieces of modernism. Instead this is what a middle-class home in Puerto Rico would feature.” The word vernacular is used in architecture to define something built without professional guidance, but even among scholars it is loosely defined. 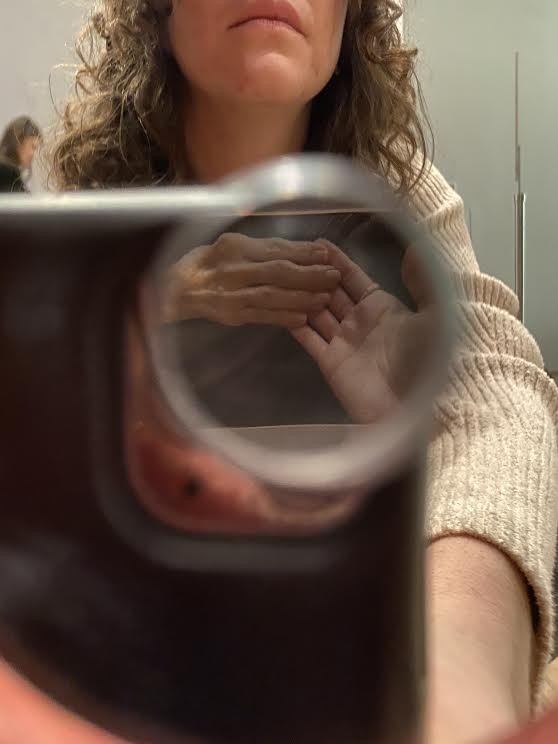 Spanish colonial architecture is exhaustingly prevalent in Puerto Rico, so shedding a light on the vernacular architecture is a way of shaping it into its own significant landmark. Many other Puerto Rican artists are drawn to themes of home and domesticity because of these architectural clashes. Soto says, “Vernacular architecture has been borrowed and integrated into mainstream culture.” Her “Graft” series, transpositions of domestic structures into museums and galleries, poetically reflects the scientific process of grafting skin from one part of the body and transplanting it to another part. “I think of them as my skin,” Soto says. “I grew up in a house like this.” By placing it into a museum, a home becomes a symbol larger than itself. 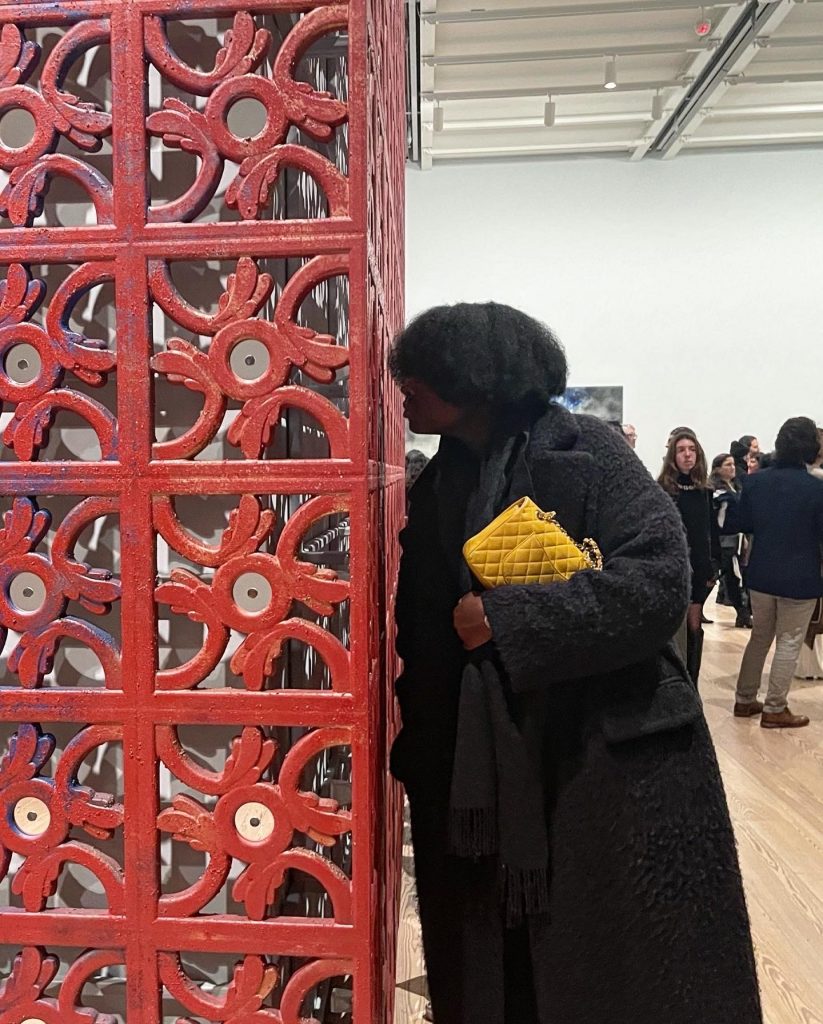 Among the many exhibitions that feature Soto this year, her work is at the Whitney Museum in New York City as part of a larger exhibition titled “no existe un mundo poshuracán: Puerto Rican Art in the Wake of Hurricane Maria,” the first sentence translating to “there is no post-hurricane world.” The photographs she took on her phone from her walks in the post-hurricane landscape, along with old photographs of her mother, are exhibited in viewfinders on a larger Graft structure wrapped around the corner where two walls meet. “I’ve become a tourist in my own land,” she says. When I visit the exhibition, I see destroyed trees juxtaposed with television screens and catch glimpses of a disaster unraveling. I can’t stop dipping my head into the viewfinders that are perfectly placed inside circles. I realize that it’s not often I am this close to a work of art. It is intimate, like looking into the window of a stranger’s home if it were inside a microscope. I overhear another visitor say with excitement, “It’s like a little world in a bottle!” But searching for the photograph in a small hole is an uncomfortable gesture as well. If I move, I lose sight of the image. The viewfinder also has a mirror reflecting our own face peering in, acknowledging our outsider perspective and voyeuristic gaze. 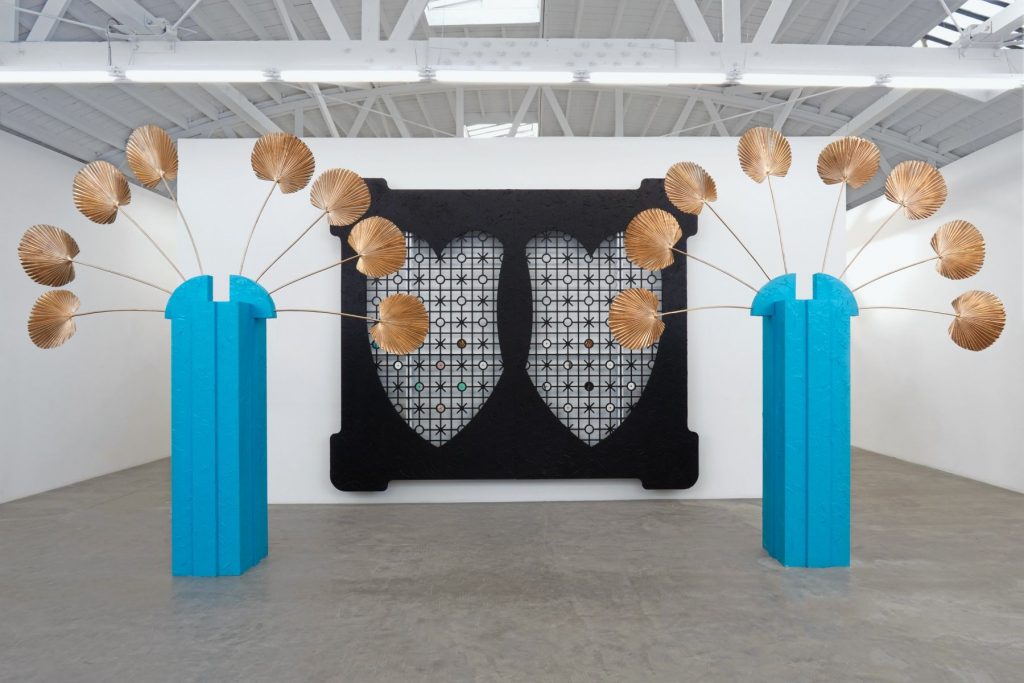 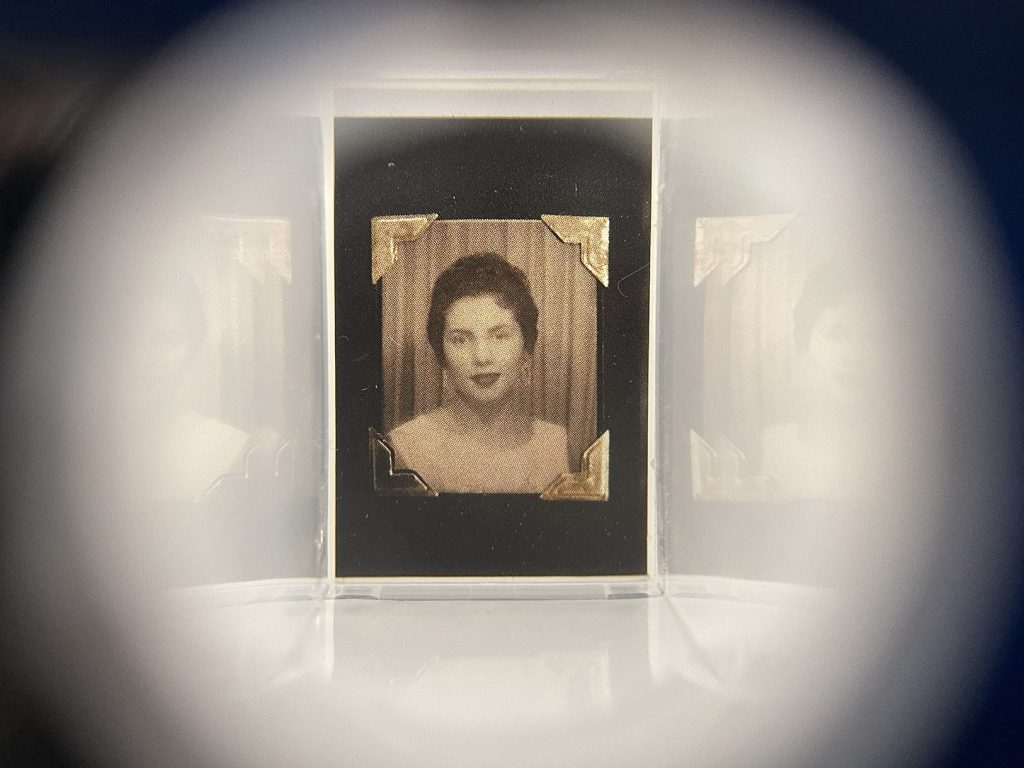 In her exhibition at the Cleve Carney Museum of Art in Glen Ellyn, which closes March 5, Soto’s structure becomes an altar specifically dedicated to her mother. “The Myth of Closure” at CCMA is composed of Grafts in the shapes of hearts and in the viewfinders are photographs of her mother in different eras of her life. When she lost her home in 2017, she also lost her mother to Alzheimer’s—“my mother lost her mind,” Soto says. Following the hurricane, she kept her mother’s chihuahua as a companion in loss and grief. 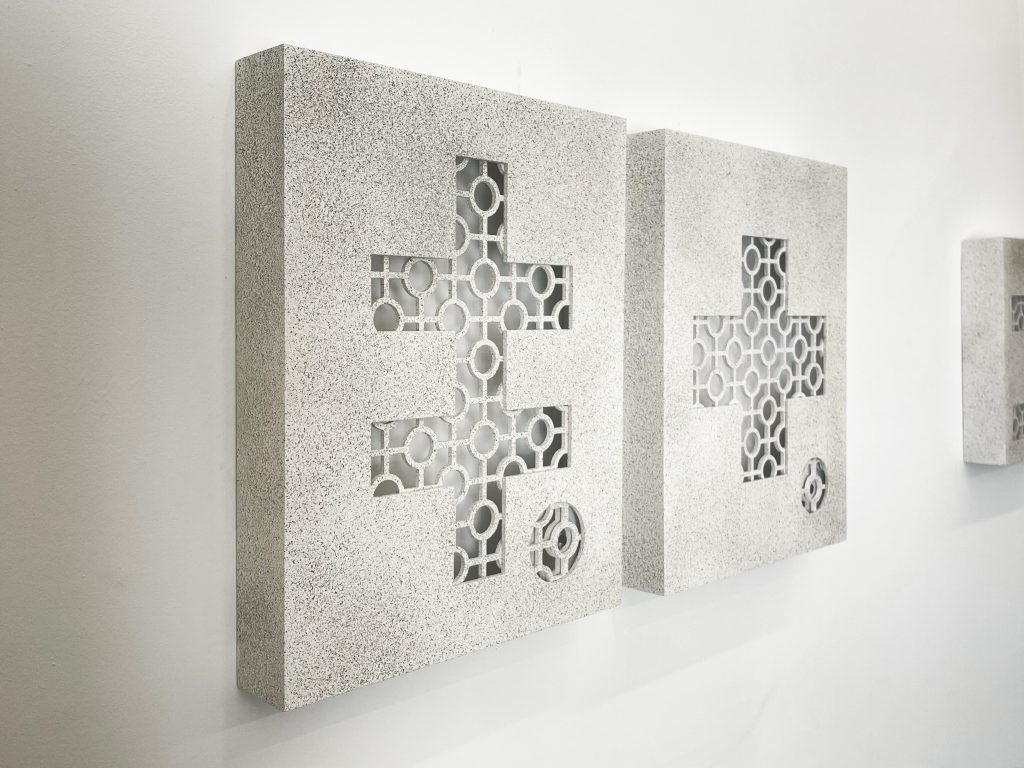 Newcity published a piece titled “Edra Soto’s Really Good Year” in 2016. Though she has had waves of difficult years since then, Soto has resurfaced this year as one of the most prominent and prevalent Chicago-based artists. She has created works for the Chicago Botanic Garden, the Museum of Contemporary Photography and Millennium Park. Alongside the work included in the Whitney Museum, Soto also has an adjacent exhibition at LatchKey Gallery in New York and a solo show at Engage Projects gallery in Chicago. Both are different iterations of this Graft series. Her largest exhibition to date, “Destination/El Destino: a decade of GRAFT,” will be at the Hyde Park Art Center, opening April 23.

Her work is not only defined by transposing Puerto Rico to Chicago. In Garfield Park, where she now lives, she has hosted multiple community art gatherings in her home. One is titled “Open 24 Hours,” and features discarded liquor bottles that she picks up during her walks, then cleans and decorates with her neighbors. Edra Soto sees the beautiful in the mundane. Throughout our conversation, she repeats that she received an MFA in painting and wants to return to the medium. But she also remarks that if she were to paint an image of a Graft, it would be an aestheticized version and wouldn’t have the same candor as her life-size replicas. Her artistic practice is defined by preserving the histories of architectural structures. Rejas are originally enclosures such as walls or fences, but Soto transforms this architecture as an opening, symbolically inviting us into her home.