I met Jojo Baby about a decade ago. I was fresh in Chicago and had just stumbled upon them at an open studio night in Wicker Park’s Flatiron building—a hub that has been home to artist studios, performance spaces and other creative businesses since the 1980s. They were flamboyant, colorful and kind. I knew I needed to tell their story. 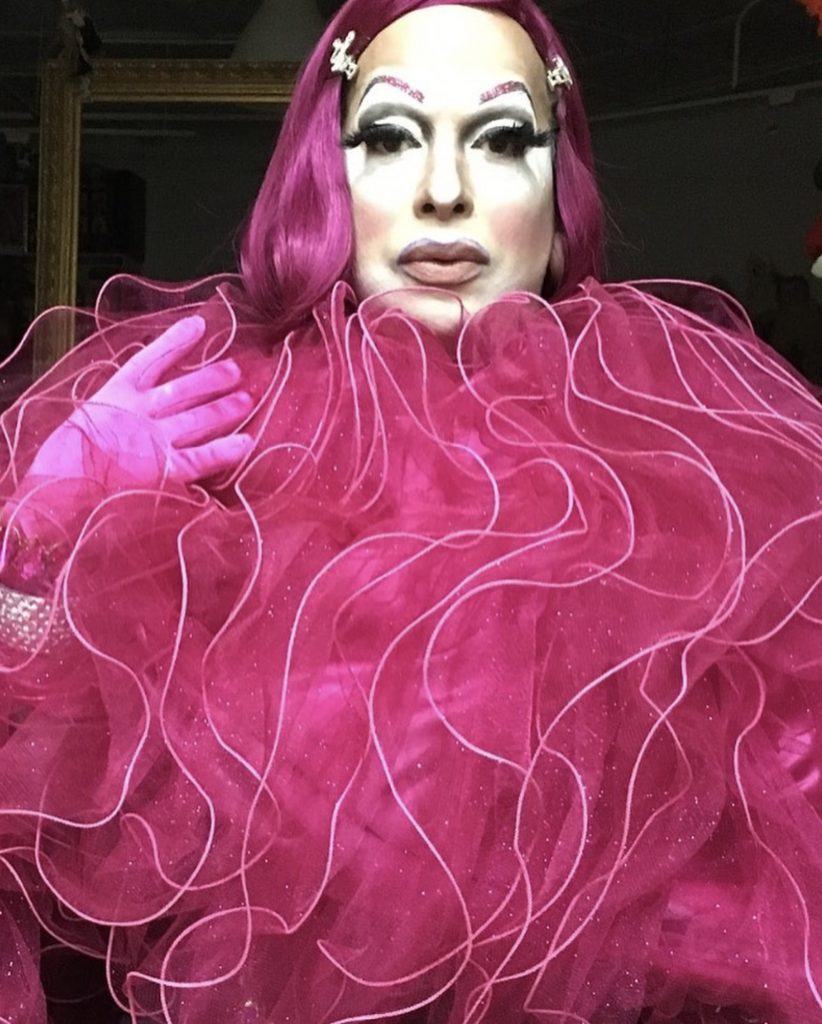 We sat down for an interview that probably took way more time than it should’ve—partly due to my lack of experience (I was a student at the time) and part because of Jojo’s larger-than-life personality. We spent hours in their studio, which is actually a gigantic dollhouse, filled with art and dolls and magic. There, I met a young Jojo, son of a Greek immigrant father and a Native American mother from the Black Hills of South Dakota, who was a bunny at the 1960s Chicago Playboy Club. I met Jojo, the club kid, who started performing at the age of fourteen after being pushed out of the house by an estranged father. And I met Jojo, one of the most prominent drag queens of the late-night, underground club scene—one that wears three-foot-tall platform shoes, elaborate costumes and outlandish make-up and fills up Chicago venues with music and joy. 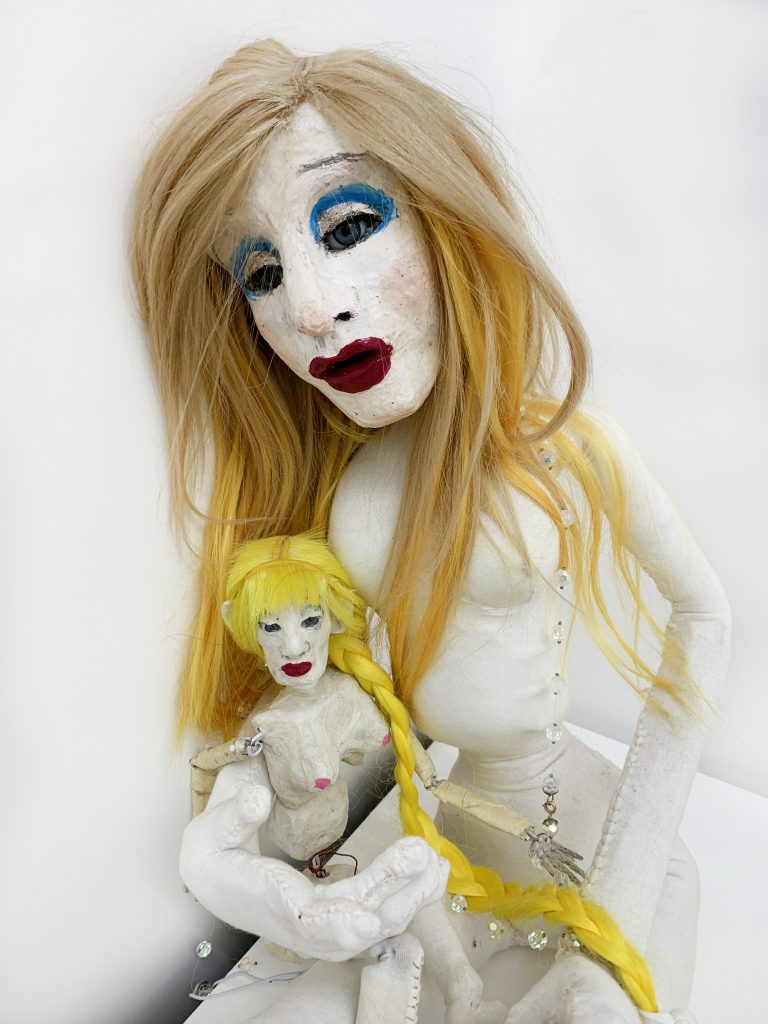 A drag performer, a DJ, a hairdresser who used to do Dennis Rodman’s leopard hair, the subject of a 2010 Clive Barker-produced documentary, Jojo has played lots of roles throughout their life. But they’re first and foremost an artist. Combining ceramics, painting, anatomy and fashion skills, they sculpt porcelain dolls. They then “breathe” life into them, in the form of a little, heart-shaped drawing on the left side of its chest, real hair and teeth, and a full chakra system—the “good voodoo,” as Jojo calls it. Some look like Greer Lankton, the transgender doll-maker who created Big Bird for the 1985 Sesame Street movie “Follow That Bird,” who was the artist’s mentor and inspiration. They look glamorous and weird at the same time. The theatricality is hard to disregard.

“The bandages are off,” their exhibition brought to life by Pickleman and Paris London Hong Kong, is a tribute to a life of legacy and influence. The walls are plastered with Jojo’s iconic costumes—cartoon characters, animal-like creatures, otherworldly personas. To add a sculptural element to the mix and provide a more in-depth look into the artist’s process, dolls would not go amiss. Mixed media, wire, tape, hair, stockings and glass eyes come together. “Greer Making Greer,” is exactly what the title suggests: a doll Greer holding on her lap another, smaller version of a doll Greer. “Dickmatizer” is a remote controlled vehicle of sorts, featuring two dildos, one on each side, mounted on top—its bizarre brazenness and colorful hues align perfectly with the artist’s vibe and perspective. Elsewhere: head sculptures with wide smiles, lush lashes and intense make-up look directly at you. 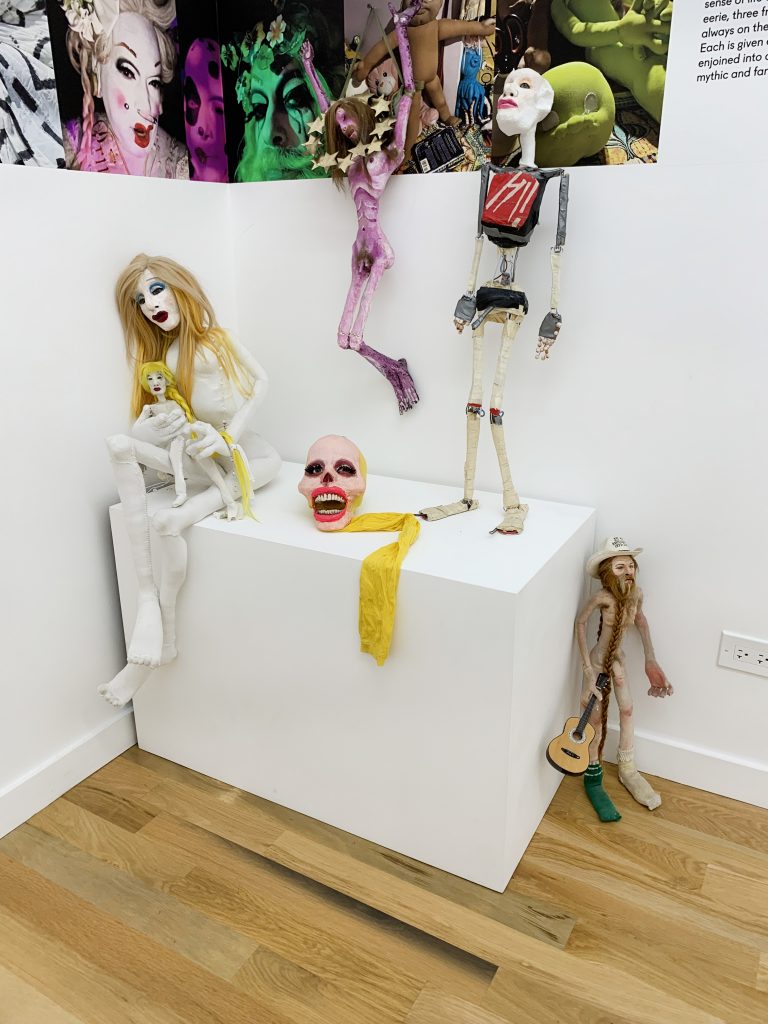 Among Jojo’s portraits of life and work, erect penises and strange-looking dolls, one grasps the artist’s essence. Dedicated to a decades-long practice that is interwoven with life, Jojo brings together the perverse and the fantastical to comment on today’s culture, to evolve, to heal. Speaking of healing, it is important to note that some of the works were created between rounds of chemotherapy—the artist was diagnosed with cancer this past fall. Hence the title of the exhibition, “the bandages are off, “ is a very deliberate one—it hopefully proposes a good omen.

Jojo’s journey has not been an easy one—discrimination, shame, betrayal, humiliation and name-calling have all been part of their story. But the artist has figured out a way to brush it off: “I have every nasty thing anyone’s ever called me tattooed on me,” Jojo told me during our very first meeting. Lifting their shirt, they revealed an unexpectedly bright-colored ensemble where Muppet characters and words like “lovechild” and “faggot” coexist.

Within the challenges Jojo had to face, there’s a sense of self-affirmation, resilience and empowerment—or maybe the right word is liberation. And if there’s one thing that this exhibition is going to leave you with is exactly this: an emotional as well as an intellectual response that forces you to face the “truth” of your emotional identity.

Jojo Baby’s “the bandages are off” is on view at Paris London Hong Kong through February 25.