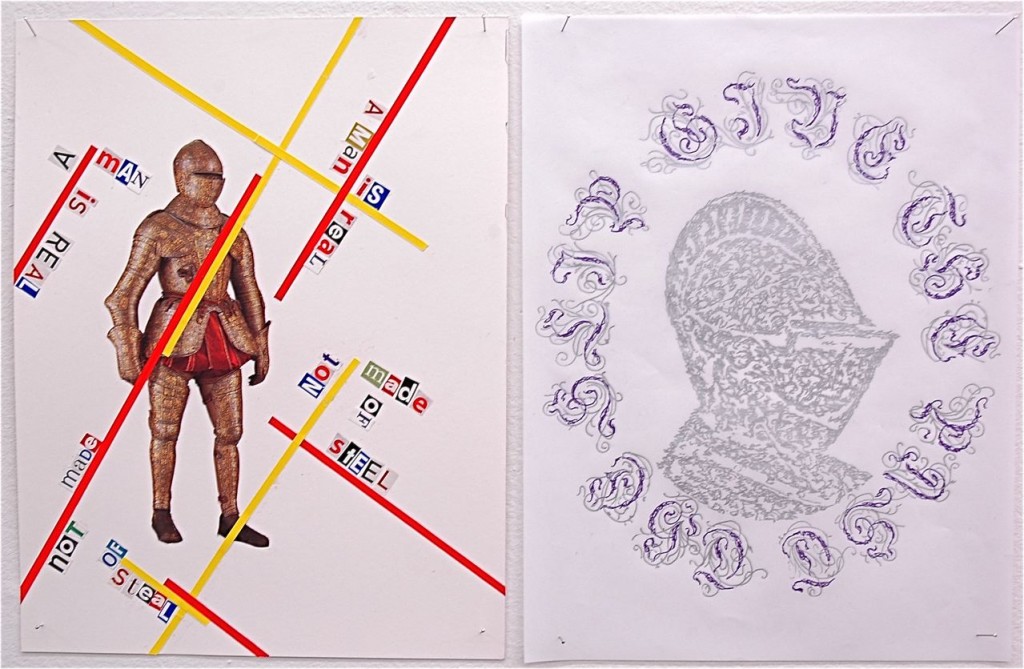 Titled “Give the Past the Slip of La Mancha,” Andrew Falkowski and Karl Erickson’s collaborative project at The Suburban slices through masculine stereotypes, idealized historical myths and authoritative language systems with a keen eye for how time’s passage reduces even the most hallowed cultural icons into figures of kitsch. The drawings and text-and-image collages that form the show’s bulk feature nerd-mascot Booji Boy, cut-out knights in ornamental armor, and quotations drawn in billboard block or ransom-style lettering. And yet, despite the freewheeling mix of cultural references from DEVO to Don Quioxte to the Who, Falkowski and Erickson’s collaboration lacks the visual pleasure and ironic punch that each delivers on his own or occasionally together, as in their series of competing Hogans Heroes and M*A*S*H portraits.  Both artists use tropes of failed boomer idealism to make visually compelling and conceptually convincing works—Erickson’s latch hook rug portraits and Falkowski’s colorful hostage-note text paintings come foremost to mind—but their project here never quite transcends a stilted cut and paste aesthetic. It feels like the artists are working out ideas to be fleshed out later—and maybe separately. That think-tank aspect is fine, and appropriate for a space devoted to experimentation. But it may disappoint those expecting more from these provocative cultural ransackers. (Claudine Isé)

Through March 12 at The Suburban, 125 North Harvey Avenue, Oak Park. By appointment.