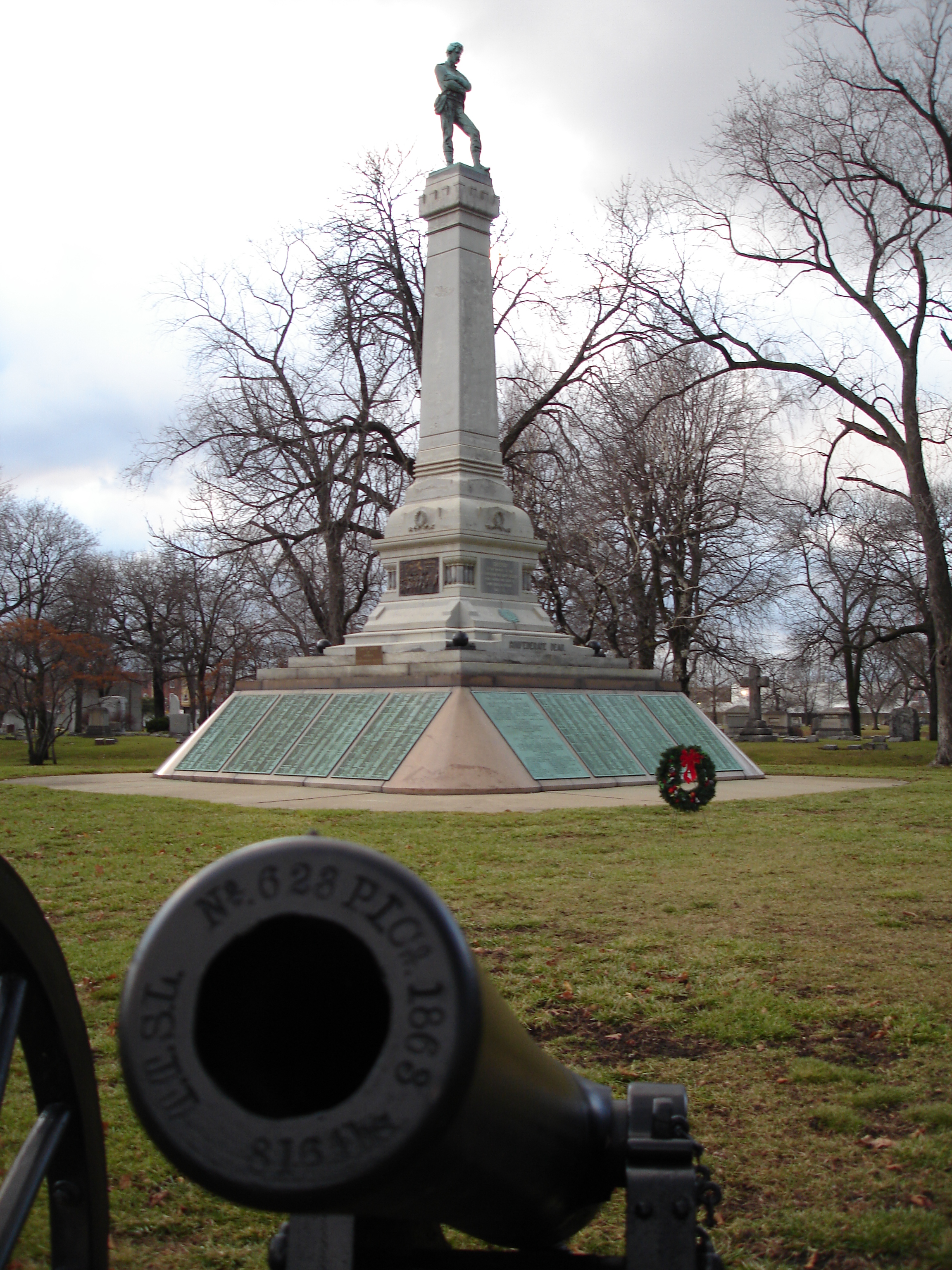 Confederate Mound, Chicago, Illinois with a cannon in the foreground. / Photo: John Delano

Ensconced in the upper Midwest, the Land of Lincoln might seem far from the controversy around Confederate monuments that ignited last year and culminated in a deadly clash between neo-Nazis and counter-protesters in downtown Charlottesville, Virginia in August. The longtime home and final resting place of one of America’s most revered statesmen and the leader of the Union during the American Civil War, Illinois has no extant monuments to the Confederate generals who fought against the North to preserve the institution of slavery.

And yet, Illinois and even Chicago itself is not free of landmarks honoring the Confederate States of America more broadly. On Chicago’s South Side, the Oak Woods Cemetery in Greater Grand Crossing—the same cemetery that hosts the graves of Ida B. Wells, Harold Washington and Jesse Owens—boasts a large-scale monument commemorating the more than 4,000 Confederate soldiers who died while imprisoned in Illinois’ Camp Douglas. Originally buried in City Cemetery in what is now Lincoln Park, the bodies were disinterred and reburied at the federal government’s expense between 1865 and 1867. Twenty years later, the Ex-Confederate Association of Chicago and the United Confederate Veterans organizations lobbied for permission to erect a grave marker at the site. Led by John C. Underwood, commander of the UCV’s Provisional Department of the North, the project raised over $10,000 from Confederate sympathizers nationwide.

The Oak Woods Confederate monument was dedicated by President Grover Cleveland in 1895 in front of a crowd of nearly 100,000 onlookers. The three-hour ceremony began with a carriage parade escorted by city police and the Illinois National Guard. Hundreds of Confederate veterans joined the procession as it neared Oak Woods. The monument’s appearance then was much as it remains today. At the top of a towering, thirty-foot granite obelisk stands the forlorn, bronze figure of a Confederate soldier. The image was based on an 1888 painting by John Adams Elder, a Confederate artist who sketched live battle scenes during the war and who went on to paint memorial portraits of many Confederate generals, including several of Robert E. Lee. On the sides of the column are bas-reliefs depicting scenes of the soldiering life, and the whole arrangement is surrounded by four spiked cannons given from military arsenal by an act of Congress. In 1911, a newly-formed federal Commission for Marking Graves of Confederate Dead modified the monument by setting it on a base of red granite on which they affixed massive bronze plaques inscribed with the names of the 4,275 Confederate soldiers known to be buried in the mass grave. Twelve unmarked marble headstones were also added to the site, commemorating unknown Union guards who died while guarding the Camp Douglas prison.

The problems presented by the so-called “Confederate Mound” at Oak Woods Cemetery represent the wider debate on what to do with America’s Confederate monuments. On one hand, they commemorate insurgents who waged war against the United States in order to guarantee the enslavement of imported Africans and their descendants under a philosophy of white supremacy. However, in the case of the Confederate Mound, instead of merely honoring the glorified leaders of the movement, the memorial marks the mass grave of thousands of individuals who died while fighting for “freedom” and “self-determination,” ideas that are still upheld in the lofty, abstract rhetoric of today’s politicians. Here, it is easy to see how a moral question can be subsumed beneath the claims of heritage and history. Thousands of dead American soldiers lie here, so why not honor their sacrifice?

But were they Americans? They called themselves Confederates and they seceded from the Union, waging a bloody war against their brothers and sisters. And what exactly was their sacrifice? If they gave their lives for a way of life, what did that way of life hold dear? If not the enshrinement of the institution of slavery, what did the Confederacy stand for? If the cause of the Civil War was truly about “the lack of ability to compromise,” as White House Chief-of-Staff and former Marine Corps General John F. Kelly recently claimed, one would nonetheless be hard-pressed to find a middle ground between a legal framework that promised “life, liberty, and the pursuit of happiness” and another that regarded nearly half its population as sub-human livestock.

A nasty side effect of the debate about Confederate memorials is its tendency to overwhelm the greater discussion we need to have about the relationship between monuments and the histories they commemorate. In the fall, I attended a roundtable discussion at the School of the Art Institute of Chicago called “Down with Monuments? On the Making and Unmaking of Public Memory.” Spurred by what Christine Mehring, professor of art history at the University of Chicago and one of the panel participants, noted as the “lack of art historical expertise” in the recently-revived debates over Civil War monuments, seven scholars weighed in on the tensions between the role of the monument as a work of art and its function of constructing history as a living object of our present. 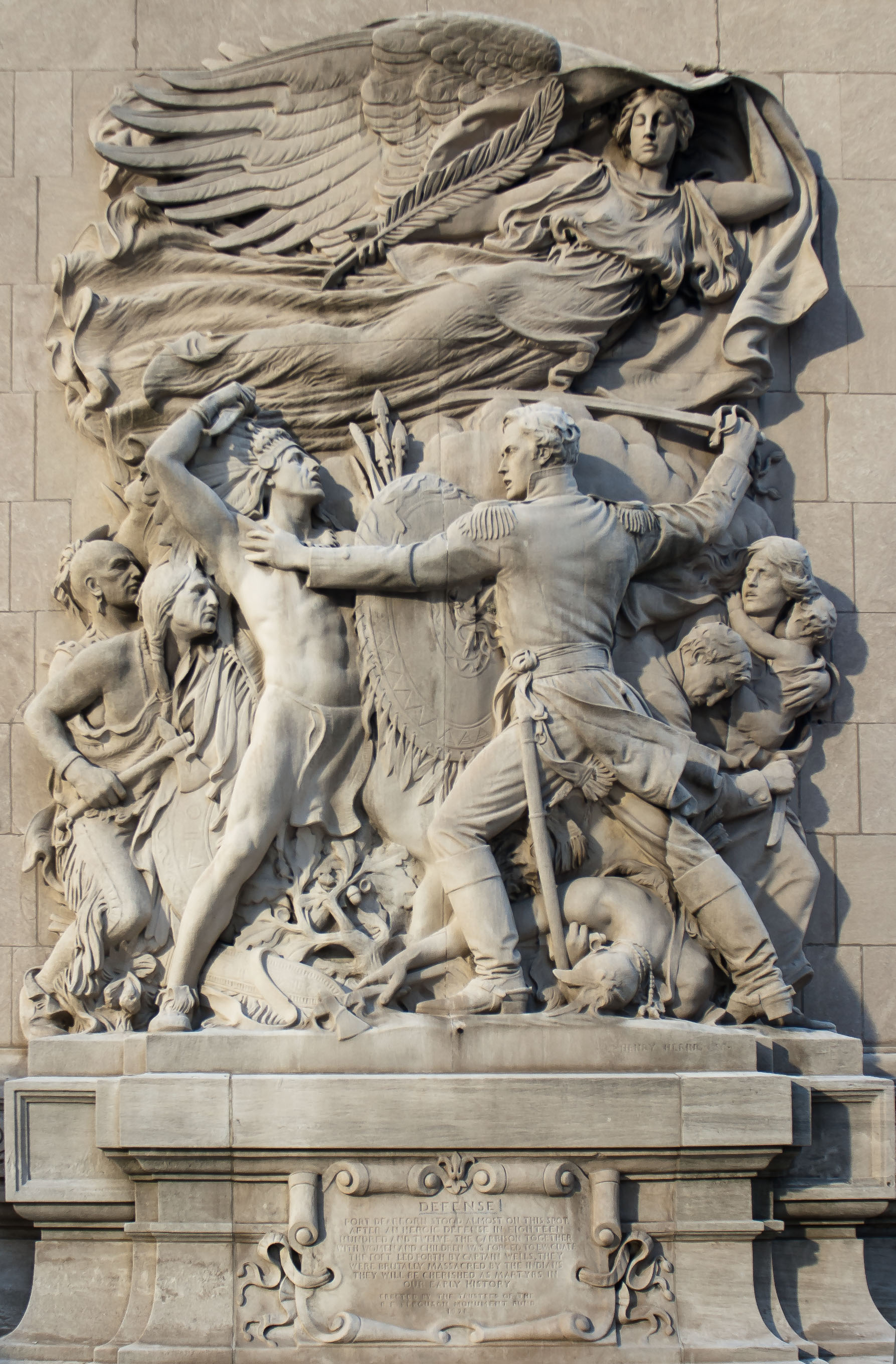 Henry Hering, “Defense,” 1928. Relief on the southwestern tower of the Michigan Avenue Bridge in Chicago.

The most compelling examples raised in the all-too-short discussion came from Chicago. While no panelists mentioned the Confederate Mound, other stone memorials from the city’s fraught past came up. Kirk Savage, author of “Standing Soldiers, Kneeling Slaves: Race, War and Monument in Nineteenth-Century America,” rejected the popular defense of Confederate memorial statues as merely an undeniable part of our collective American history, reminding the audience that the Confederate States of America remains the only nation in the history of the world that was invented for the express purpose of perpetuating “negro slavery,” as the Confederate constitution itself called it. Why do statues of Robert E. Lee and other Confederate figures continue to be a lightning rod for debates about American history? Because, Savage argued, the Confederacy stands for a kind of white supremacy embedded in the fabric of American memorial culture extending far beyond the Confederate statues themselves. Using a local example, Savage showed that the bas-reliefs on the Michigan Avenue bridge houses erected in 1928 tell “a white supremacist history of Chicago” as they commemorate the so-called “Fort Dearborn massacre” of 1812, in which the military fort that once stood on the south bank of the Chicago River was evacuated, leading to the death or capture of all of its American occupants by the indigenous Potawatomi who had not yet been expunged from the area by white settlers. Although he was killed in the conflict, Captain William Wells is portrayed by artist Henry Hering as prevailing over the natives who seem to threaten the lives of a white man, woman and child sheltering behind him. The monument’s meaning is clear: white people will prevail and ultimately settle Chicago, led by the white male hero that permeates all of America’s greatest myths. 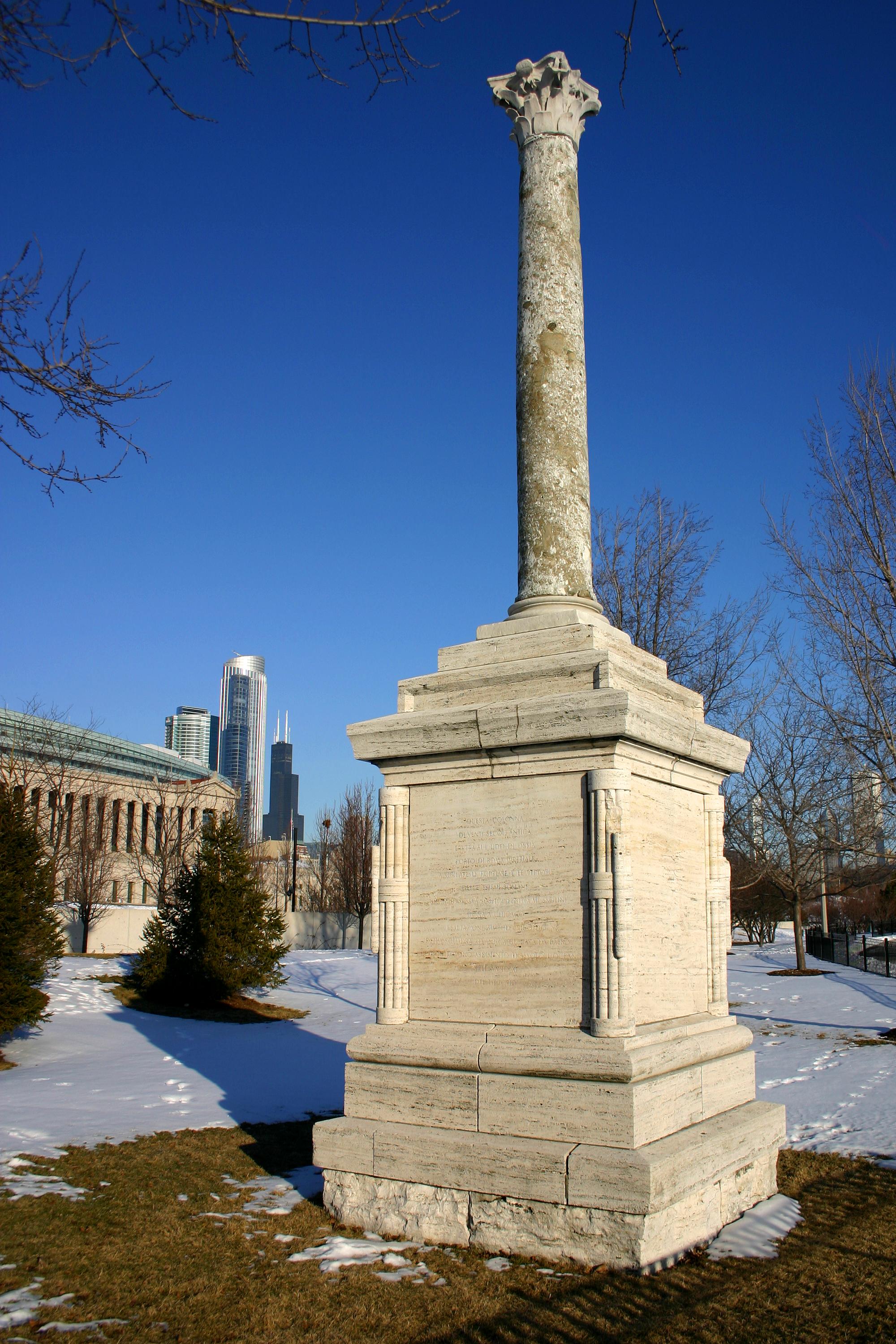 The fabulation of the past and the forging of its links to our present are the essential magic tricks of the monument. Often this is accomplished by emulating historical styles, such as the equestrian statue or the obelisk. Other times, the past is directly incorporated into the present, as is the case of the infamous Balbo Monument in Burnham Park near Soldier Field. An ancient Roman column with a modern base inscribed in honor of Italo Balbo’s transatlantic flight to Chicago’s Century of Progress world’s fair in 1933, the column is dedicated by Benito Mussolini in honor of “the 11th year of the Fascist Era” in Italy. Patrick R. Crowley, assistant professor of art history at the University of Chicago, brought up the statue during the roundtable by pointing out that Rome remains to this day full of monuments to Mussolini. He described the urban fabric of the city, redrawn by the Fascist leader to stoke the popular imagination of its ancient grandeur, as a “Fascist Disneyland.” Because it directly incorporates ancient history in the form of an artifact, the Balbo monument seems to escape the kinds of criticism that have been lobbed at purpose-built Confederate Monuments. Nonetheless, as Crowley argued, Balbo’s “reputation for carpet-bombing Libya and murdering his political opponents” makes him an especially repugnant figure to memorialize even within the zero-sum pantheon of bad fascists. To our President’s certain dismay, there are not “very fine people on both sides” of this debate. And yet, Chicago still honors Balbo with a column and a street named after him downtown.

Mechtild Widrich, assistant professor of art history at SAIC, started the conversation that evening with several theses on the question of the monument. Among them, that the “meaning and power of monuments are directly related to their presence in space. Monuments are not history, they are a construction of history.” And, “Public space is always contested. Monuments are signs of power, monuments are about the contest over power in public space.” This constellation—public space, power, history and meaning—arrives at the core of what must be asked of each of our monuments: What history does this image construct? Who owns that history, and who benefits from its telling as such? What is being left unsaid? Who owns this space, and who controls it? These are questions with answers that can and should change over time, lest we fall under the spell of the monument and forget that the future, like history itself, has and will always be ours for the making.