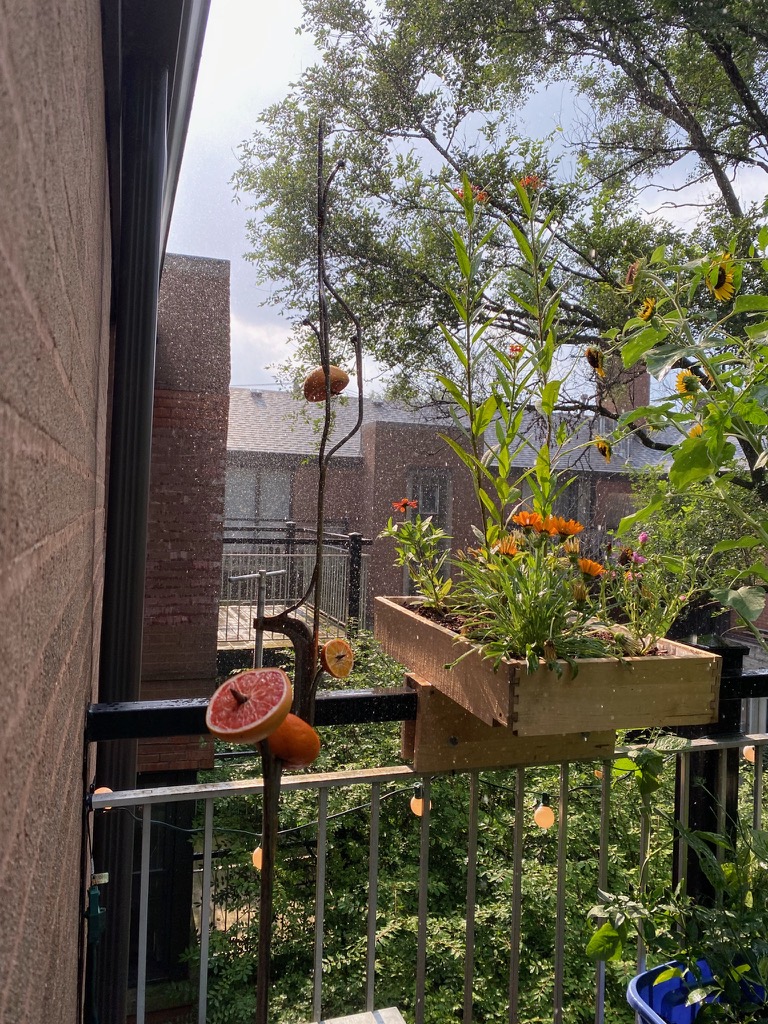 A 21.5-inch stainless steel square table is the site of one of Chicago’s newest alternative gallery spaces. Nestled in the corner of curator and writer Erin Toale’s courtyard balcony, the table hosts installations by artists in two-week increments. Launched in June, Toale explains that the project features work by “artists interested in engaging with Chicago’s flora and fauna via sanctuary-like sculptures or installations.” Faysal Altunbozar’s sculptures were adorned with fruit each day; Devin Balara installed a display stand of bird-food cakes. The balcony is home to a flourishing container garden and bird feeders, which also serves as an attraction to local fauna.

Bird Show has virtual gallery hours every Sunday from 1-5pm, which are broadcast on Twitch, and occasionally offers virtual public programming. Follow their Instagram for bird sightings and exhibition news.

How did you conceive of the project?

2020 was filled with so much grief and rage. I felt pretty unsure of how to proceed with my practice as a curator/artist/educator/writer/organizer/human. Last summer, I started a small container garden on my balcony, and it nourished me in the way nature does: giving me a space to sit, think, listen, work and grow. As it got larger, it became a way to get to know and feed my neighbors from our shared courtyard. In 2021, I approached the garden with more intentionality and started thinking about how it could function as an accessible community space despite all of the limitations we have around viewing and gathering right now. My interest in biodiversity, composting and other garden-adjacent projects had grown to include casual birdwatching and there were already a few feeders. I ended up nursing an injured baby robin back to health and it just kind of hung around. Jen Delos Reyes named it Birdie Sanders because it had little tufty Bernie feathers around its head like a halo. The space is named for that bird with some nods to other contemporary and historic Chicago project spaces (plus, the initials BS amuse me).

I was thinking about projects like Side by Side, Shower Show/Flower Show, and Trunk Show—mostly because they celebrate abundance rather than being defined by what they lack. I am inspired by projects that use resources readily available to us, instead of succumbing to a self-defeating scarcity mentality, which is inherent to upholding white supremacy and capitalism. It would be very easy for me to talk myself out of Bird Show because it is too much of this, or not enough of that. Instead I just decided to work with what I had: a balcony space, my own expertise, and community members I love to collaborate with. That being said—there are a lot of things about this project that are not ideal/that I wish were different. I am staying flexible and open-minded, allowing the project to evolve and/or end as circumstances change and different needs and opportunities present themselves. 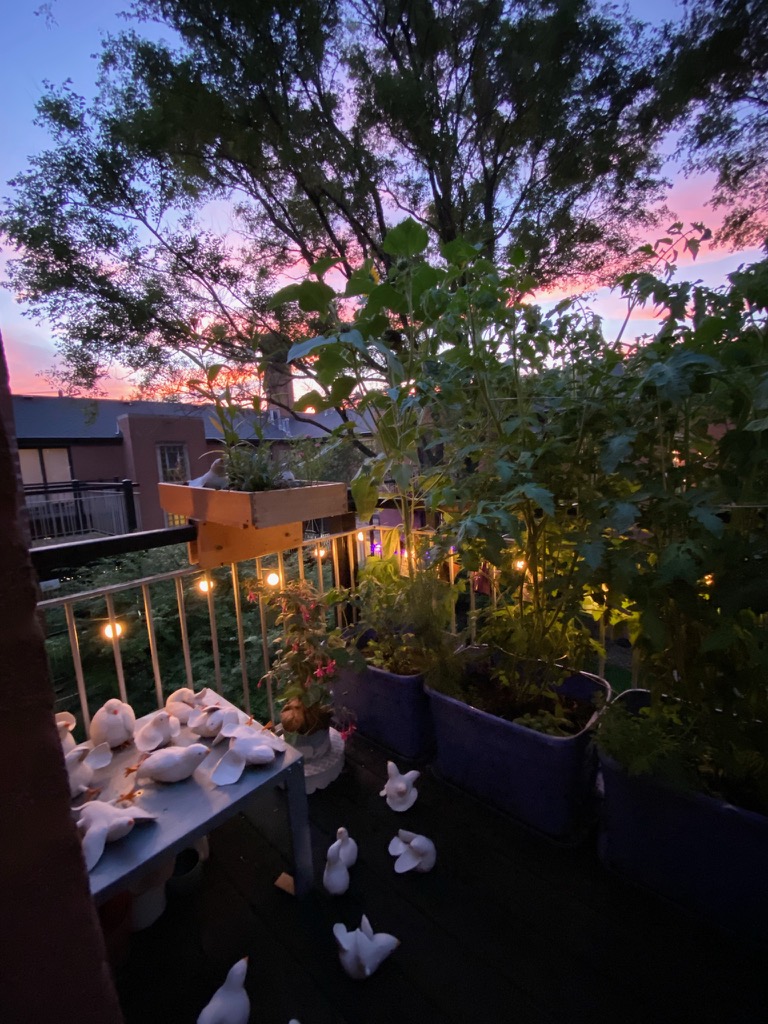 Can you talk about some of the installations you’ve had so far?

The artists for Summer 2021 were selected by a panel of amazing jurists who have all inspired me in both institutional roles and independent projects: Jen Delos Reyes (Side by Side), Grace Deveney (Prospect New Orleans), Raven Falquez Munsell (Trunk Show), and Kate Sierzputowski (Flower Show, Shower Show). The first show was Barbara Jeanne Jenkins (June 20-July 4). This was a very literal visual interpretation of Bird Show that also encompassed the community values we espouse—it was a collaboration with her neighbor who rescues mourning doves. Lynne Warren and I did a writing trade and she contributed a very moving poem and essay. This wasn’t part of the original plan (ok, quasi-plan) but I loved the writing and decided that producing new scholarship would be an integral part of the mission and exhibitions. Faysal Altunbozar (July 11-25) welded tall, tender feeders and I placed fruit offerings on them daily, which attracted an exciting variety of bugs and birds. Graham Feyl’s essay “Horny Gate: Compiled Notes about Fruits and Spikes,” is extremely funny and really hits on how paradoxical the sculptures are. Kushala Vora’s work was up August 1-15, and I am very much still processing and figuring out how to talk about that installation.

The website is a work in progress but each artist will eventually have their own page with documentation of the work and any programs, an essay, the menu and recipes the artist and I sourced/cooked/ate from the Bird Show garden and other local gardens, and any other relevant resources or materials. It’s also my hope to make a publication of this archive, pending funding. Everyone involved gets a modest stipend. I used my stimulus checks to fund the summer season stipends and purchase the webcams, domains, and other materials. I know it’s gauche to talk about money but I think we collectively need to be more transparent about finances. I also aspire to support a circular local cultural economy, and that means compensating each other or time banking labor. 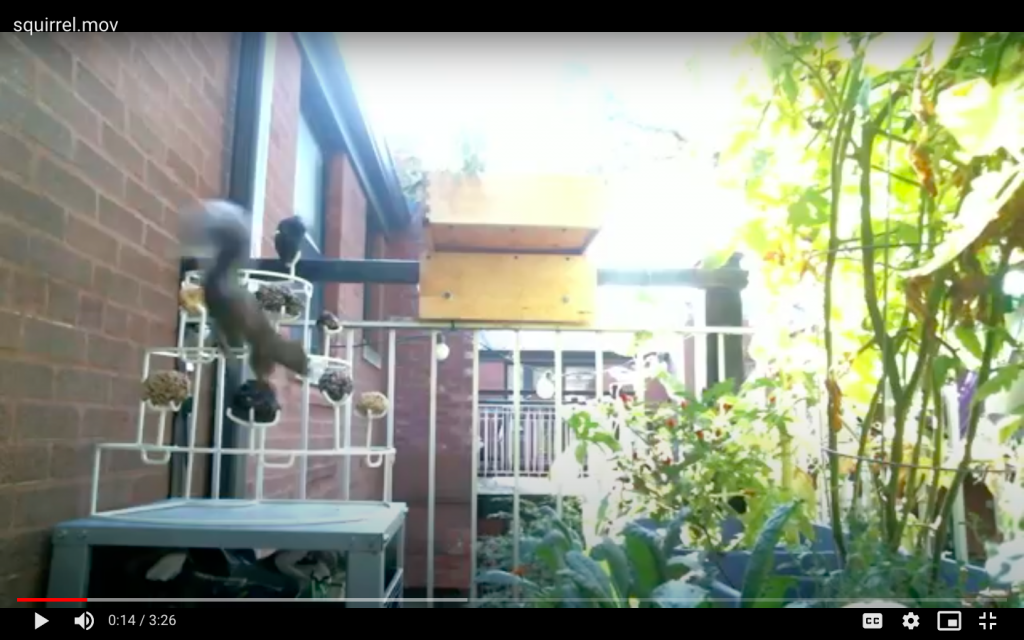 Will the project continue into the fall, or does it have a definite end?

Bird Show has two more shows in the summer season. Devin Balara is up August 22-September 5 and Julian Van Der Moere will run September 12–22 (the autumn equinox). I am organizing two shows for Terrain Biennial (October 2-November 15). Andi Crist will be on the balcony and I am also doing a decentralized project—posters and yard signs—with Niccolò Moronato. There will be another open call for winter proposals soon. I had invited Greg Bae, who passed away unexpectedly in July, to be one of the jurists. I am still figuring out how to honor that, and him.

Can you provide any sort of clues as to what the future exhibitions might entail?

I should reiterate that I don’t select the artists, but when I visualize Winter Bird Show I always think of a scaled-down version of Ugo Rondinone’s “we run through a desert on burning feet, all of us are glowing our faces look twisted” which was on the Art Institute’s Terrace October 31, 2013–April 20, 2014. I was working there at the time. It was a brutal winter weatherwise, which coincided with an extremely difficult season of my life. The Scholar Rocks covered in snow is an image seared in my memory that is a calming, meditative thing for me to think about.