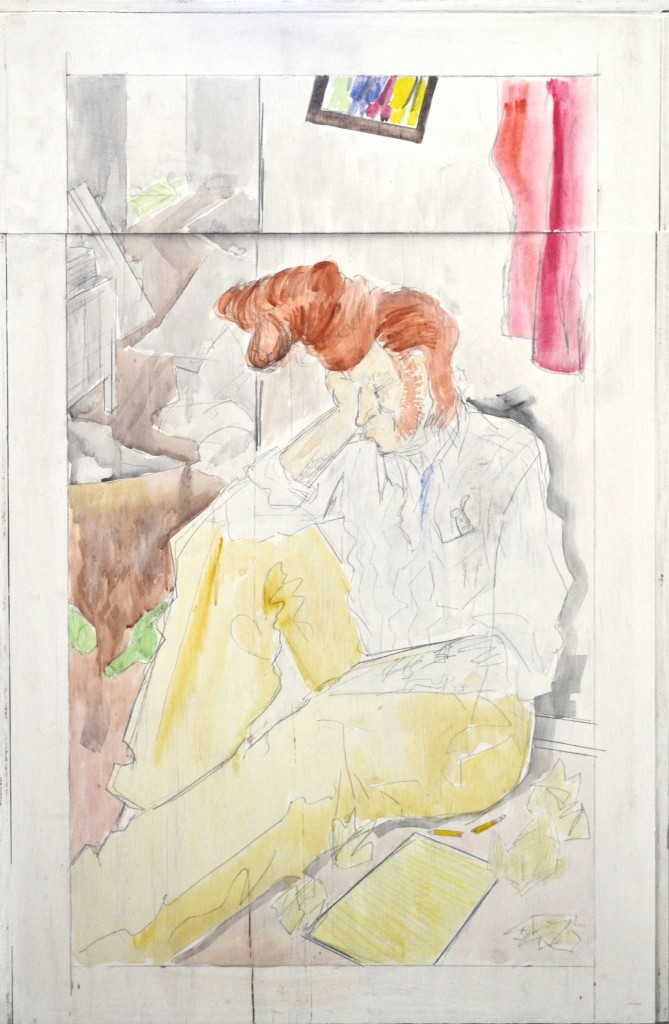 It’s the day before his solo exhibition opens at The Renaissance Society, and Peter Wächtler is quietly dictating labels for “Secrets of a Trumpet.”

Dressed in dark blue jeans with a plaid scarf wrapped tightly around his neck, the German artist walks softly up to each piece in the gallery—first, four large wooden boxes by the entrance. Next, a series of bronze sculptures arranged in the middle of the gallery, and last, four massive watercolor paintings pinned up across the back wall. Waiting for him to finish, I wander back toward several paragraphs of text mounted on white panels at the entrance of the gallery: “I don’t plan ahead, I get planned, I am tossed around by greedy gods and bosses, friendship became an anecdote, love an excuse for selfishness, sex is for the others and I can hardly undo my shoelaces before I go to sleep.”

“I wrote it, I just finished two days ago,” Peter Wächtler appears next to me. “It’s not really linked to anything you see here,” he adds, quickly dismissing the writing and walking briskly over to one of the four large boxes lining the front wall.

Watercolor paintings sprawl across all sides of the piece—on the front, a delicate and washed-out scene features a couple in bed, sharing a kiss as the afternoon sun shines through the window. One box over, loose brushstrokes depict a line of funeral attendees standing with their backs to the picture plane. One of the figures turns his head to the side as he raises a flask to his lips, revealing the same trademark pompadour from the man in the intimate scene next door. The fleeting stories expose both major life events and everyday routines on the same platform, poking fun and prodding emotion to evoke an autobiographical playbook with built-in appeals for audience empathy.

As an artist with a self-expressed passion for pop culture, Wächtler’s work frequently stars characters in happenstances that lace everyday scenes with both stoic humor and mundane melancholy. Playful with undeniably dark undertones, the incredibly narrative characters and scenes in his work are contrasted sharply by the artist’s minimal commentary. “There’s no significance, really,” he tells me as we move toward a painting of a still, angular blanket on a clothesline. Surrounding it, the three other paintings feature loose garments blowing heavily in the wind. Amidst rolling green hills and cloudy gray skies, the orange blanket remains mysteriously frozen still.

Although Wächtler works in a variety of media, he frequently speaks about his writing as a method of expression he favors. In an attempt to draw out the writer in him, as we walk back toward the front of the gallery I ask him to choose three words to describe his work. He falls silent, then laughs and says I should just have asked him his favorite color. “Blue,” he says with a soft smile as he turns to look back at the show. “It’s blue.” (Maria Girgenti)

Peter Wächtler’s exhibition “Secrets of a Trumpet” shows through April 3 at The Renaissance Society, 5811 South Ellis.