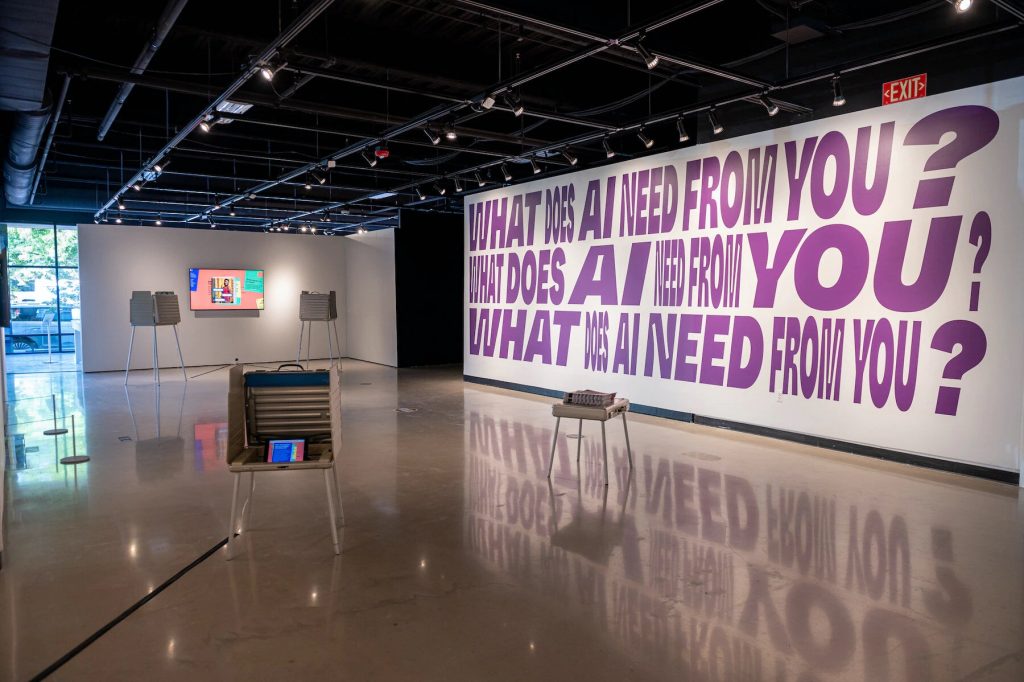 Artificial intelligence is increasingly part of our social, political and cultural spheres. What’s more, algorithmic systems are used by tech companies for profit and user engagement, despite growing safety concerns. Whether by collecting users’ information to sell to advertisers or as training data to develop more sophisticated software, these largely opaque and biased data practices act as a dominating societal force. Often lost in this conversation is that the current state of AI is shaped by predetermined arrangements of power—not necessarily fixed, nor our inevitable societal fate. This is what transmedia artist Stephanie Dinkins seeks to remind us in “On Love & Data,” her first major survey exhibition, taking place at the Stamps Gallery at the University of Michigan. This exhibition, curated by Srimoyee Mitra, is a call to action for the public to leverage power and autonomy within our current technological ecosystem so that tech reflects the nuanced ideas, values and beliefs of the communities making them. The exhibition’s interactive installations represent entry points for viewers to see the present moment as an opportunity to reflect and move toward action.

At the center of this ethos is “Afro-Now-Ism,” a concept created by Dinkins that asks the public to imagine themselves in a critically integrated yet expansive space versus one of opposition and limitation. Deriving from the well-worn presentation of tech as obscure and bleak, the artist instead invites us to come into this dialogue from a space of optimism and care. According to Afro-now-ism, this mindset is needed to urgently imagine a world where society can repurpose AI and build ecosystems that work “towards the equitable distribution of resources and mutually beneficial systems of governance.” This concept is translated by the vibrant neon sculpture of Afro-Now-Ism which greets you when you set foot in the gallery, setting the tone of the show. 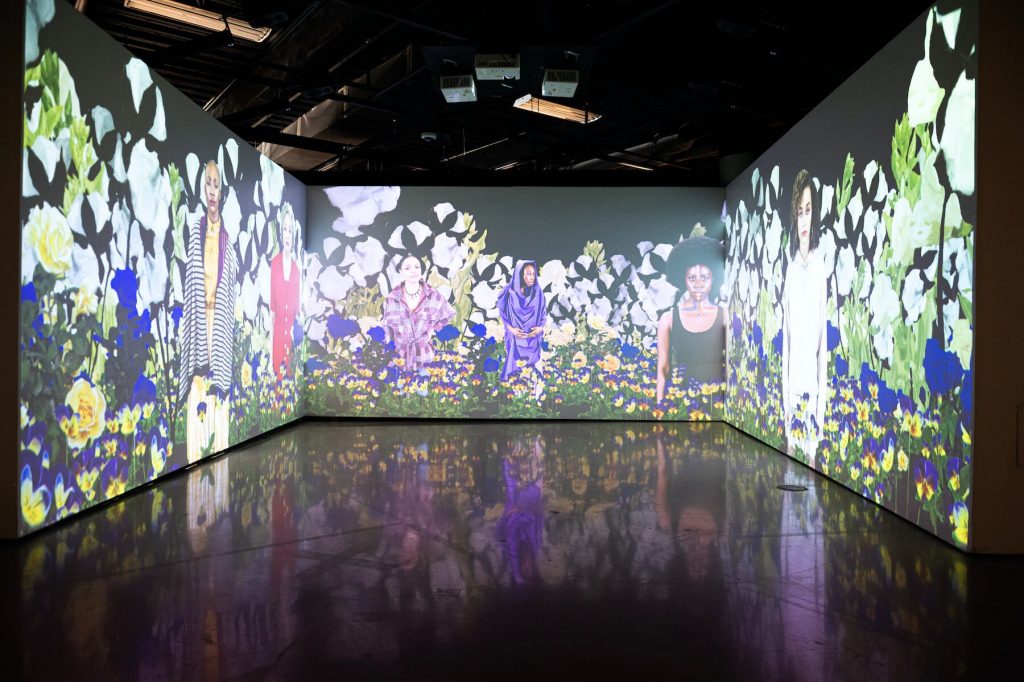 While “On Love & Data” debuts new installations, it also includes work from past and ongoing projects. All are in conversation with one another, despite the layers of technological interaction, whether from personal introspection, the relationships humans form with algorithms or AI governance by governments and private corporations. Throughout the show, we are reminded of how interconnected these entities are. “Binary Calculations Are Inadequate to Assess Us (BCAI),” an app developed by Dinkins, is an effort to create culturally specific data commons through crowdsourced images and texts. Visitors must participate in a voting booth. Meanwhile, “Complementary” directly invokes the role technology had in our last presidential election by recreating a familiar yet alternate platform for visitors to deliver messages to elected officials in front of its flag installation, complementary to the colors of the star-spangled banner. Responses are gathered on Instagram in a repository of diverse voices articulating issues that matter to them. Even “Say It Aloud,” a three-channel video installation facilitated by the fictional Professor Commander Justice, encourages participants to add their ideas toward the concept of Afro-Now-Ism via video contributions which then appear on the WebXR video projection. Whether a cacophony of voices, a repository of hashtag posts or a peoples’ dataset, these are all generative exercises to practice the concept of Afro-Now-Ism before we set foot back outside.

The exhibition also situates technologies within past cultural traditions, in particular the Black experience. This offers a window for visitors to take inventory of our respective technological ecosystems and connect them to our embedded technologies and networks. As such, technologies can become sites of care, a space to meditate and to play without inhibition. “Not the Only One V1. Beta 2″ seeks to create a multi-generational memoir of the Black American family told from the perspective of an AI chatbot but trained and aligned with the oral histories and storytelling of said community. According to Dinkins, our memories and oral histories can be small data. Even more majestic is “Secret Garden,” an immersive installation centering the power of the narratives of Black women as well as the intergenerational relationships formed with each other. These relationships are another form of AI in itself. “Say It Aloud” includes okra, a staple of African American cuisine, as the fragments that make up Professor Commander Justice’s galaxy. Oral histories, gardening, interpersonal networks while perhaps considered a thing of the past, belong in the future too as our embedded technologies or algorithms.

As you walk from installation to installation, Dinkins makes sure you don’t lose sight of the bigger picture of Afro-now-ism.

What does AI need from you? Who are your people?

These large prompts, found on the gallery walls, serve as guiding posts to remind us of our positionality in relation to technology and its possibilities to nudge us toward action, to answer these questions and find the limitations by asking ourselves, each other and robots. This is the case with Bina48 in “Conversations with Bina48 Fragments 7, 6, 5, 2,”: “Who are your people?”

The exhibition also reminds us of contemporary issues such as predatory massive data-collection systems or racist biases now embedded in the technology we use daily. “A ___________ woman smiling” series demonstrates tech’s difficulty in accurately and humanely representing Black women. A series of experiments with text to image General Adversarial Network (GAN), which draws from widely-used datasets, was unable to produce recognizable images with words meant to represent Black women. While this show is timely for everyone, I consider its setting within a university art gallery and emerging tech hub like the city of Ann Arbor a subversive provocation which Dinkins invites the greater public—including members of the university community—to consider our own positionality to AI and technology. (Yvette Ramírez)

“Stephanie Dinkins: On Love and Data” is on view at Stamps Gallery, 201 South Division, Ann Arbor, through October 23.