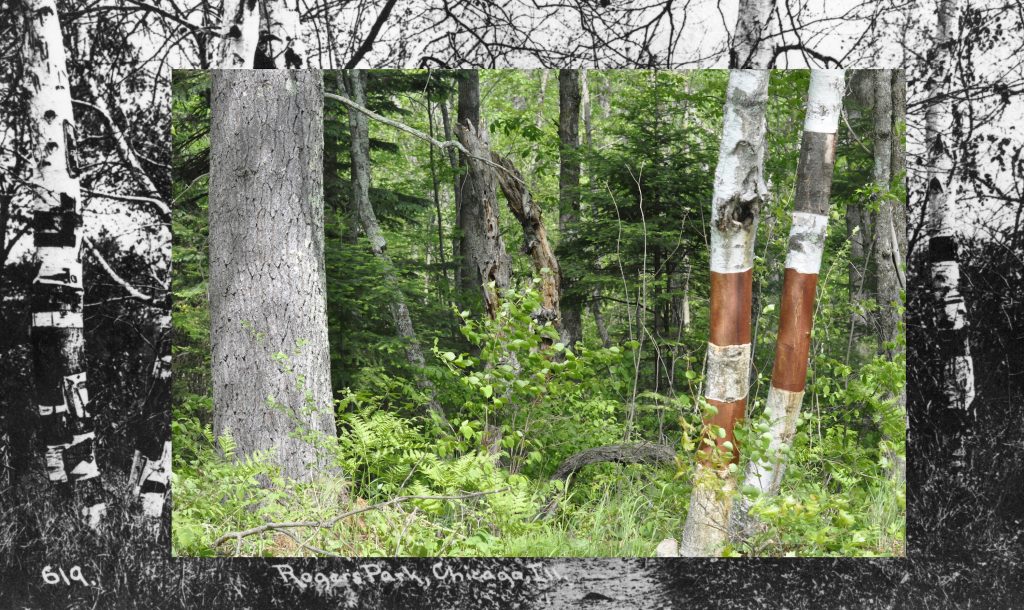 Birchbark harvesting has long been an important indigenous practice for tribes in the Great Lakes region. Birchbark varies depending on size, age of tree and forest type, with different textures, straightness and blemishes (such as the presence of moss or fungus) making the bark as suitable for particular uses. Known as wiigwaas in the Ojibwe language, paper birch bark is used in everything from basketry to canoe making. This exhibition, a collaboration between Roman Susan and the Rogers Park/West Ridge Historical Society, uplifts this practice, featuring work by artist Nora Moore Lloyd and native language expert James Kaagegaabaw Vukelich alongside archival documents from the American Indian Center (AIC) and the Historical Society.

The centerpiece of the exhibition is a wall-spanning, collaged banner by Lloyd, of a vibrant color photograph of a birch with harvested bark set atop a black-and-white historical photograph of a grove of birch trees that stood in Rogers Park decades ago. Historical documents and photos show that the neighborhood was once flush with the trees. According to a 2015 report from the U.S. Department of Agriculture, the number of birch trees in ceded territories in Michigan, Minnesota and Wisconsin “has decreased by forty-nine percent and total bark supply has decreased by 45.5 percent” since 1980. Any recent visitor to Rogers Park can see that birch trees are largely absent. 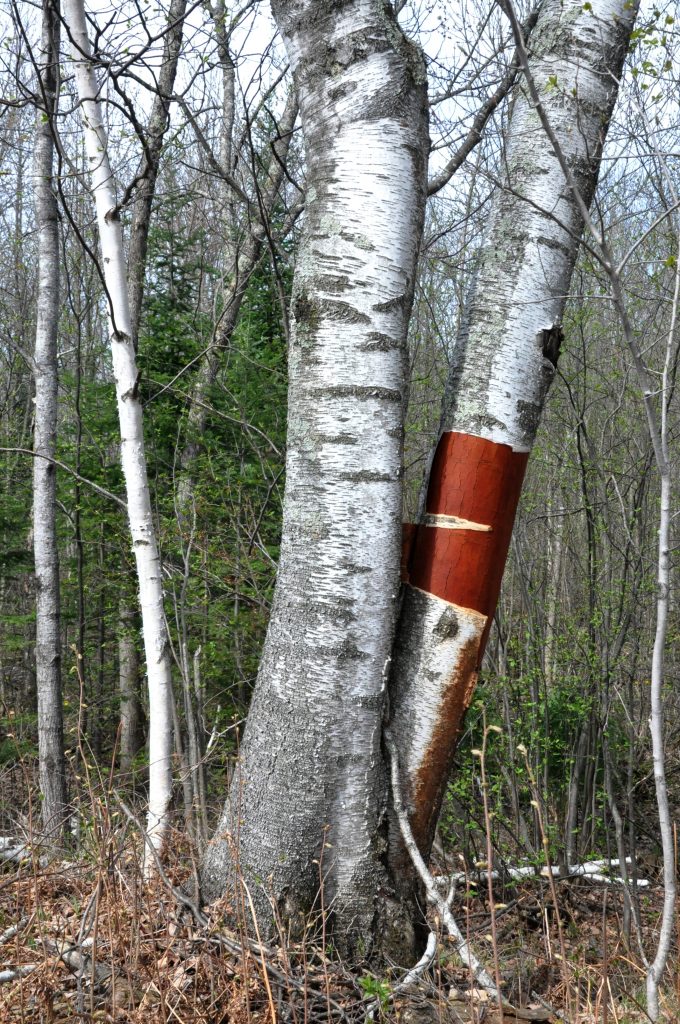 Much of the exhibition is devoted to historical material, including copies of treaties signed in 1822 and 1833 that ceded much of what we know as Chicago to the federal government, and the Indigenous People’s Day ordinance, which was introduced by Alderman Rossana Rodriguez-Sanchez in the fall of 2019. Also on view is a photocopy of a remarkable book, “The Red Man’s Greeting,” by Potawatomi Chief Simon Pokagon, from 1893. Written on birch bark on the occasion of the 1893 Columbian Exposition in Chicago, the book, intended for the fair’s mostly white audience, rebukes white America for the deplorable treatment of Native Americans. He sold copies on the Midway Plaisance outside the fair. A nearby video by Vukelich shows the bark as it is harvested, and documents a woman using the material to deftly weave a basket.

These materials work together to make the stories and experiences of indigenous Americans central to the story of Chicago, historically as well as today. This reality is beautifully explained in a land acknowledgement crafted by Roman Susan and AIC, which loops on a screen in the exhibition, and reads in part: “Chicago is home to the sixth-largest urban American Indian community that still practices their heritage and traditions including care for the land & waterways.” This exhibition is presented in a masterfully nonlinear way, reminding us that what we do today is embedded in the past and will resonate far into the future. (Kerry Cardoza)

Birchbark, Wiigwaas is on view at the Rogers Park/West Ridge Historical Society, 7363 North Greenview, through August 19